Church of the Faroe Islands

Church of the Faroe Islands

The Church of the Faroe Islands (Faroese Fólkakirkjan) was a diocese of the Lutheran Church of Denmark until it became independent on 29 July 2007, as the smallest of the world's few remaining state churches.

About 85%[citation needed]of the Faroese people belong to the state church. Other churches include the Plymouth Brethren and Roman Catholics. 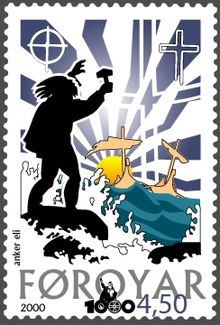 Arrival of Christianity about 1000 AD: Chieftain Tróndur í Gøtu defending the Nordic Religion of the Vikings
Main article: Christianisation of the Faroe Islands

According to the Færeyinga Saga, it was the Viking chief Sigmundur Brestisson, who brought Christianity to the Faroe Islands. On the orders of the Norwegian King Olav Trygvason, Sigmundur forced the island people to convert to Christianity in 999 AD. Resistance to the new religion, led by the notorious Tróndur í Gøtu, was quickly suppressed; and even though Sigmundur himself lost his life, Christianity gained a foothold.

About one hundred years after the introduction of Christianity, the Faroese church joined the Catholic mother church, with an episcopal residence in Kirkjubøur and subject to the archbishop of Nidaros (Tróndheim) for most of the time. From the time Christianity was introduced until the Reformation there were probably 33 bishops in the Faroe Islands.

This period was not always peaceful. The sagas of the Faroe Islands contain two accounts of the way the church took possession of a large proportion of the land, overtaxing the people so harshly that it led to open rebellion. The saga of the battle of Mannafallsdal relates that the bishop (probably Bishop Erlend, appointed in 1269) was killed outside his church by the rebels. The historical value of this saga is highly debatable - but it does serve to illustrate the conflict between the theocratic church and an impoverished population. However, there is reasonable documentation of the fact that the bishop's residence in Kirkjubø was burnt to the ground by the rebels, and that Erlend was removed from the islands by order of the King. Bishop Erlend died in Bergen in 1308.

In 1540 the last Catholic bishop in the Faroe Islands was removed from his position. His Protestant replacement only lasted a few years - then he too left the islands and a dean took over as the representative of the church under the Bishop of Zealand in Denmark.

The orthodox Lutheran form of Christianity propounded by the Zealand bishop Jesper Brochmand in particular gained a strong foothold in the Faroe Islands, and lasted longer here than in the rest of the Kingdom of Denmark. Brochmand's devotional book dating back to about 1650 and Thomas Kingo's hymns from 1699 constituted a significant proportion of the spiritual life of the islands right up until the twentieth century. Indeed, the expression Brochmandslestur is still used to describe long and, as some might perceive them, boring texts and speeches. 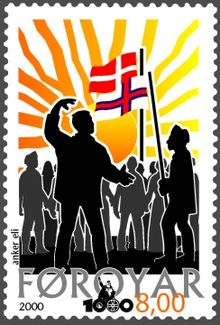 Faroese clergymen played a major part in the National awakening and language conflict, which was a conflict within Faroese society rather than with the Danish.

When the Danish trade monopoly was lifted in 1856, Faroese society started to boom both economically and culturally. The restoration of long-suppressed Faroese culture also led to changes in Christianity on the islands. After great contention, Faroese was given the same status as Danish as the language used in hymns and preaching in 1924-25. The ecclesiastical rituals (christening, burial, marriage etc.) were introduced in Faroese in 1930, and in 1961 the authorised Faroese edition of the Bible was published. During the first half of the 20th century, Dean Jákup Dahl had translated the New Testament from Greek - this was published in 1937. Dahl also translated the psalms from the Old Testament, and after his death in 1944 a vicar named Kristian Osvald Viderø continued to translate the rest of the Bible from Hebrew. In 1963 the first Faroese hymn book was published, and in the same year the old title of Dean on the islands was upgraded to Deputy Bishop. In 1977 the first female vicar was ordained, and in 1990 the Faroe Islands became an independent diocese with its own bishop within the Church of Denmark.

In 2005 the Faroes signed a treaty with Denmark that allows for the taking over of most public institutions, including the Vágar Airport and the People's Church. On the National Holiday Ólavsøka 29 July 2007, the Faroese Church became totally independent of the Church of Denmark.