Faroese[1] (føroyskt, pronounced [ˈføːɹɪst] or [ˈføːɹɪʂt]), is an Insular Nordic language spoken by 48,000 people in the Faroe Islands and about 25,000[citation needed] Faroese people in Denmark and elsewhere. It is one of four languages descended from the Old West Norse language spoken in the Middle Ages, the others being Icelandic, Norwegian and the extinct Norn, which is thought to have been mutually intelligible with Faroese.[citation needed] Faroese and Icelandic, its closest extant relative, are not mutually intelligible in speech, but the written languages resemble each other quite closely.[2] 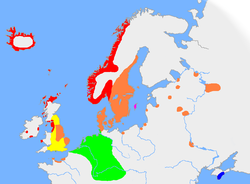 Around AD 900 the language spoken in the Faroes was Old Norse, which Norwegian settlers had brought with them during the time of the landnám that began in AD 825. However, many of the settlers were not from present-day Norway but descendants of Norwegian settlers in the Irish Sea. In addition, native Norwegian settlers often married women from Norse Ireland, Orkney, or Shetland before settling in the Faroe Islands and Iceland. As a result, Celtic languages influenced both Faroese and Icelandic. There is some debatable evidence of Celtic language place names in the Faroes: for example Mykines and Stóra & Lítla Dímun have been hypothesized to contain Celtic roots. Other examples of early-introduced words of Celtic origin are; "blak/blaðak" (buttermilk) Irish bláthach; "drunnur" (tail-piece of an animal) Irish dronn; "grúkur" (head, headhair) Irish gruaig; "lámur" (hand, paw) Irish lámh; "tarvur" (bull) Irish tarbh; and "ærgi" (pasture in the outfield) Irish áirge.[3]

Between the 9th and the 15th centuries a distinct Faroese language evolved, although it was still mutually intelligible with the Old West Norse language and was closely related to the Norn language of Orkney and Shetland.

Until the 15th century Faroese had an orthography similar to Icelandic and Norwegian, but after the Reformation in 1536 the ruling Danes outlawed its use in schools, churches and official documents. The islanders continued to use the language in ballads, folktales and everyday life. This maintained a rich spoken tradition, but for 300 years the language was unwritten.

This changed when Venceslaus Ulricus Hammershaimb and the Icelandic grammarian and politician, Jón Sigurðsson, published a written standard for Modern Faroese in 1854 which is still in existence. Although this would have been an opportunity to create a phonetically true orthography like that of Finnish, they produced an archaic, Old Norse-based orthography similar to that of Icelandic. The letter ð, for example, has no specific phoneme attached to it. Furthermore, although the letter 'm' corresponds to the bilabial nasal as it does in English, it also corresponds to the alveolar nasal in the dative ending -um [ʊn].

Hammershaimb and Sigurðsson's orthography met with opposition for its complexity, and a rival system was devised by Jakob Jakobsen. Jakobsen's orthography was closer to the spoken language, but was never taken up by speakers.[citation needed]

In 1937 Faroese replaced Danish as the official school language, in 1938 as the church language, and in 1948 as the national language by the Home Rule Act of the Faroes. However, Faroese did not become the common language of media and advertising until the 1980s.[citation needed] Today Danish is considered a foreign language, though around five percent of Faroe Islanders learn it as a first language and it is a required subject for students in third grade[4] and up.

It is unusual for Faroese to be taught at universities outside the Faroes, although it is occasionally included in Scandinavian studies; University College London and the University of Copenhagen have course options in Faroese for students reading Scandinavian Studies.[5] Most students, therefore, learn it autodidactically from books, by listening to Faroese on radio [6] and through correspondence with Faroese people. A good opportunity for learning Faroese is also by visiting websites.

The University of the Faroe Islands offers an annual three-week Summer Institute which includes: 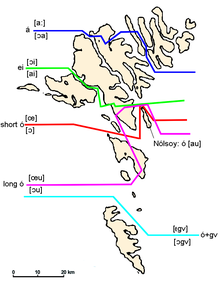 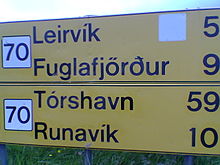 An example of Faroese ő

The Faroese alphabet consists of 29 letters derived from the Latin alphabet:

As in several other Germanic languages, stressed vowels in Faroese are long when not followed by two or more consonants. Two consonants or a consonant cluster usually indicates a short vowel. Exceptions may be short vowels in particles, pronouns, adverbs, and prepositions in unstressed positions, consisting of just one syllable.

As may be seen on the table to the left, Faroese (like English) has a very atypical pronunciation of its vowels, with odd offglides and other features. For example, long í and ý sound almost like a long Hiberno-English i, and long ó like an American English long o.

While in other Germanic languages a short /e/ is common for inflectional endings, Faroese uses /a, i, u/. This means that there are no unstressed short vowels except for these three. Even if a short unstressed /e/ is seen in writing, it will be pronounced like /i/: áðrenn [ˈɔaːɹɪnː] (before). Very typical are endings like -ur, -ir, -ar. The dative is often indicated by -um which is always pronounced [ʊn].

In some dialects, unstressed /ʊ/ is realized as [ø] or is reduced further to [ə]. /ɪ/ goes under a similar reduction pattern so unstressed /ʊ/ and /ɪ/ can rhyme. This can cause spelling mistakes related to these two vowels. The table to the right displays the different realizations in different dialects.

Faroese avoids having a hiatus between two vowels by inserting a glide. Orthographically, this is shown in three ways:

Ð and G as glides

<Ð> and <G> are used in Faroese orthography to indicate one of a number of glides rather than any one phoneme. This can be:

The so-called "skerping" (Thráinsson et al. use the term "Faroese Verschärfung" – in Faroese, skerping /ʃɛɹpɪŋɡ/ means "sharpening") is a typical phenomenon of fronting back vowels before [ɡv] and monophthongizing certain diphthongs before [dːʒ]. Skerping is not indicated orthographically. These consonants occur often after /ó, ú/ (ógv, úgv) and /ey, í, ý, ei, oy/ when no other consonant is following.

There are several phonological processes involved in Faroese, including:

Faroese tends to omit the first or second consonant in clusters of different consonants:

Faroese Words and Phrases in comparison to English, and Other Germanic languages

Faroese grammar is related and very similar to that of modern Icelandic and Old Norse. Faroese is an inflected language with three grammatical genders and four cases: nominative, accusative, dative and genitive.

This is a chronological list of books about Faroese still available.