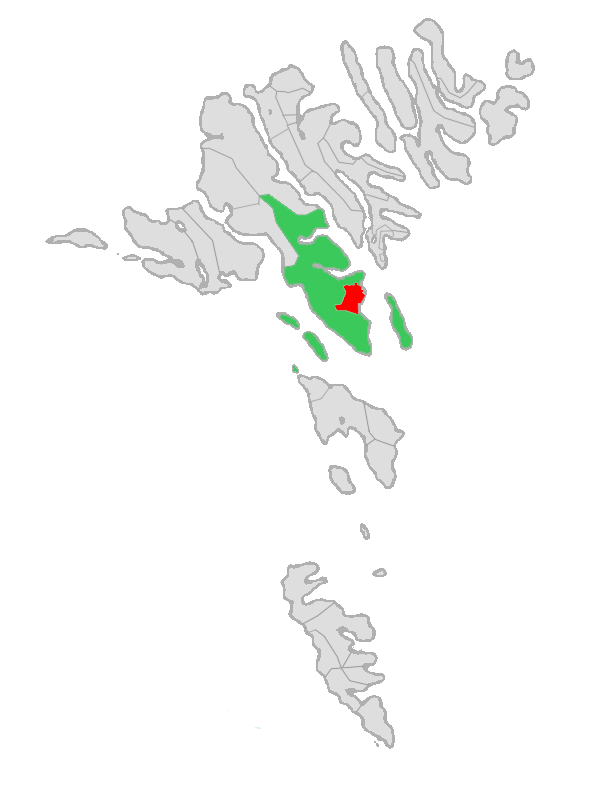 Tórshavn (IPA2|ˈtʰɔuʂhaun) is the of the . It is located in the southern part on the east coast of . To the north west of the town lies the convert|347|m|ft|sing=on|spell=us high mountain , and to the southwest, the convert|350|m|ft|sing=on|spell=us high . The city itself has a population of 19000 (2008). The city was founded in the and may well be the oldest capital in Northern Europe.

The Vikings established their parliament on the Tingenes peninsula in Tórshavn AD. All through the the narrow peninsula jutting out into the sea made up the main part of Tórshavn. Sources do not mention a built-up area in Tórshavn until after the Protestant reformation in . Early on Tórshavn became the center of the monopoly trade, therefore being the only legal place for the islanders to sell and buy goods. In the trade monopoly was abolished and the islands were left open to free trade. The town has grown rapidly ever since the turn of the 20th century into the undisputed administrative, economic and cultural center of the Faroes.

The name of the city means "'s Harbour", named after the god of and in . The city's coat of arms shows Thor's hammer , which tells people that Tórshavn dates back to pre-Christian times. The Faroese usually refer to their capital as Havn - harbour.

According to the earliest source to the Faroe Islands, , emigrants who left Norway to escape the tyranny of of settled in the islands about the end of the ninth century. The Viking settlers established their own parliament called "ting". Local tings where established in different parts of the islands. The main ting was established on in Tórshavn 825 AD. Tinganes is the that divides the harbour into the two parts "Eystaravág" and "Vestaravág". Færeyinga Saga says: "the ting stead of the Faroese was on Streymoy, and there is the harbour that is called Tórshavn". In the Viking Age it was a tradition to hold the ting at a neutral and thus uninhabited place, so nobody had an advantage of the location. In fact, there was no settlement at Tinganes to that time, but it was the most central place of the islands. The Vikings would meet on the flat rocks of Tinganes every summer. The Viking age eventually ended in . The ting was followed by a market which gradually grew into a permanent trading area.

All through the the narrow peninsula jutting out into the sea made up the main part of Tórshavn. It belonged to the outfield of two farmers. Although, unlike the rest of the Faroese villages, Tórshavn was never a distinct farming community. In a royal trade monopoly was established in Tórshavn by the Norwegian Crown. During the 12th century all trade between Norway and the Faroes, along with other tributary islands to the west, became centralised in . According to a document from 1271 two ships would sail regularly to Tórshavn from Bergen with cargoes of salt, timber and cereal. Tórshavn therefore had more contact with the outside world than the other villages.Under the Norwegian and then later Danish rule, the government officials made Tórshavn their home. All of these things put together with the fact that Tórshavn was the thingstead of the islands influenced the town’s development in a different direction.

Sources do not mention a built-up area in Tórshavn until after the Protestant reformation in .When pirate attacks became quite frequent in the Faroes it became a priority to protect the town and its trade. In ca. a small fort, , was built by the Faroese naval hero and trader at the north end of the harbour. Later small fortifications were built at Tinganes.

In Tórshavn had 101 inhabitants. The population was divided into three equally large groups made up of farmers, their families and servants, trade and government officials and people who owned no land and therefore not much else; this included the landless from the villages that during this period came to Tórshavn in search of work. They were imposed guard duty on Skansin without pay, for clothing and food they depended on the bounty of the farmers. Because of this poor people from Tórshavn were often contemptuously referred to as beggars and considered of no account. Fishing became their livelihood.

In 1655 king endowed the Faroe Islands to his favourite , the rule of the von Gabel Family, -, is known as "Gablatíðin". It is the darkest chapter in the history of Tórshavn. Gabel's administration suppressed the islanders in various ways. The trade monopoly was in the family’s hands and it wasn’t designed for the needs of the Faroese people. People across the country brought products into town and had to be satisfied with whatever price they were given. At the same time imported goods where limited and expensive. There came considerable complaints from the islands' inhabitants of unjust treatment by the civil administration in Tórshavn. These not only included the persons in charge of the monopoly trade, but also the and others. It was during this period, in , that Tinganes was ravaged by a fire. A store of gunpowder kept at Tinganes had blown up. Many old houses burnt to the ground and old Faroese records where lost as were Gabel's documents.

Conditions improved in Tórshavn when the trade monopoly became a royal monopoly in . The royal monopoly was supplied with goods from three times a year. However, in 1709 Tórshavn was hit by a plague of smallpox, killing nearly the entire population. The town had by this time reached a population of 300 and 250 of the inhabitants died. Still, it was during the latter half of the 18th century that Tórshavn started to develop into a small town. This was while was in charge of the trade monopoly. From and during the next 20 years onwards Ryberg was allowed to carry on an entrepot trade which was mainly based on smuggling to . Because of the French-British conflict there was room for this kind of operation. In Tórshavn his warehouses filled up with goods. Ryberg was the first person who thought of making a financial profit from fishing, which later became the most important economic factor to the islands. He experimented with salted cod and herring but at this point in time nothing much beyond this happened.

In free trade came to the Faroe Islands. It opened the islands up to the world and transformed the economy and Tórshavn forged ahead. The farming land was rented out to townspeople who could later buy it if they wished to. These small plots of land eased people’s existence considerably, as they now could be able to keep a cow and perhaps some sheep. The population grew considerably.

In 1866 Tórshavn's town council was founded. The town has been the capital of the Faroe Islands ever since. And later, in 1909, Tórshavn became a market town with the same municipal charter as Danish market towns.

In 1927 Tórshavn had a modern harbour built. This made it possible for larger ships to berth.

During the , Skansin was used as the headquarter of The Royal Navy Commands and two 5.5" guns, used aboard the before WWII, were deployed. [ [http://www.navweaps.com/Weapons/WNBR_55-50_mk1.htm ] ]

Today Tórshavn is prosperous and full of activity. In 1974 the neighbouring villages and were made part of the town area. Later even more municipalities joined the Torshavn municipality. In 1978 Kaldbak, in 1997 Argir, in 2001 Kollafjørður and finally in 2005 Kirkjubøur, Hestur and Nólsoy.

was first built in and partly rebuilt in . Since it has been the seat of the Bishop of the Faroe Islands (in the national Evangelical–Lutheran Church).

Tórshavn is the capital of the Faroe Islands, and as such is the seat of the Faroes’ home rule government. The government holds the executive power in local government affairs. Today the government is located on the peninsula of Tórshavn. The parliament, the , which was originally located on Tinganes, was relocated to the town square in .

The town is served by Bussleiðin - a network of local buses. Buses also depart to villages throughout the islands.

There is a in Tórshavn; the nearest airport is .

* , the old part of town, it is still made up of small wooden houses covered with turf roofs. The oldest one dates back 500 years.
* , the second oldest church in the country.
* Tórshavn harbour
* Skansin
* , the Faroese art museum
* The church, Vesturkirkjan, with outside art work by .
* The , the most important cultural institution in the Faroes.
* The historical museum in Hoyvík, with all its treasures.
* The museum of Natural History, with a small botanical garden with 150 Faroese plants.
* , the country's most important historical site.
* Niels Finsens gøta, Tórshavns only walking street

* and , is the Faroese parliament and government with all its national institutions.
* and , both publicly owned.
* , situated next to the national archives, a navigational college, a teachers college, etc.
* is the postal service of the Faroe Islands.
* 12 countries have a representative Consul in Tórshavn: , , , , the , , , , , Britain, and .