Flag of the Faroe Islands

Flag of the Faroe Islands

Swallowtailed version of the flag, unofficial, but popular on the Islands 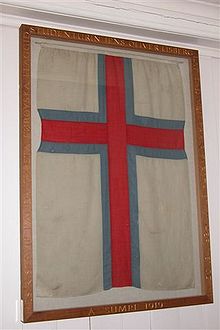 The original flag now hangs in the church of Fámjin

The flag of the Faroe Islands is an offset cross, which represents Christianity, following as with other Nordic flags the tradition set by Dannebrog.[1][2] The flag is called Merkið which means "the banner" or "the mark". It resembles the flags of neighbouring Norway and Iceland.

The design of the flag incorporates a red Nordic cross, which is offset to the left. The red cross is surrounded by an azure-blue border and is set on a white field. The flag design closely resembles that of the Norwegian flag, with the fimbriated cross. The flag ratio is usually 16:22 or 8:11.

White symbolises the creators of the flag, the foam of the sea and the pure, radiant sky of the Faroe Islands, while the old färöerischen blue and red colours are reminiscent of other Scandinavian and Nordic flags; representing the Faroe Islands' bonds with other Nordic countries.[3] 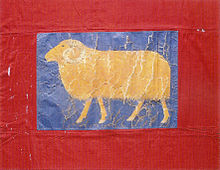 Old version of the Faroese flag from the 19th century

The modern Faroese flag was devised in 1919 by Jens Oliver Lisberg and others while they were studying in Copenhagen. The first time the Merkið was raised in the Faroe Islands was on 22 June that year in Famjin on the occasion of a wedding. On 25 April 1940 the British occupation government approved the flag for use by Faroese vessels. 25 April is still celebrated as Flaggdagur and it is a national holiday. With the Home Rule Act of 23 March 1948, the flag was finally recognized by the Danish Government as the national flag of the Faroes. The original copy of the flag is displayed in the church of Fámjin in Suðuroy. 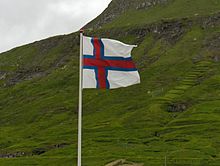 In the music video for singer Björk's song Declare Independence, the flag of the Faroe Islands (as well as that of Greenland) are featured on the uniforms of those who appear in the video. Björk, who is from the former Danish possession of Iceland, has utilized her song as a wake-up call for colonized peoples to break their ties with their colonizers.