Flag of the Republic of Ireland

Flag of the Republic of Ireland 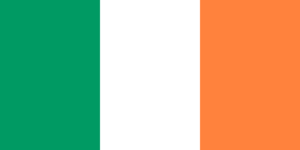 Use = 111111
Symbol =
Proportion = 1:2
Adoption = 1919
Design = A vertical of , , and orange.
Type = NationalThe flag of Ireland is the of Ireland ( _ga. An Bhratach Náisiúnta), also known as the tricolour [In the English language, when referring to the Irish tricolour, it is correctly pronounced as "try"-colour" as opposed to "trickalour" for the French tricolour and other flags.] . It is a vertical of (at the hoist), , and orange. The flag proportion is 1:2 (length twice the width). The green represents the older Gaelic tradition while the orange represents the supporters of William of Orange. The white in the centre signifies a lasting truce between the 'Orange' and the 'Green'. [ [http://www.taoiseach.gov.ie/index.asp?locID=194&docID=242 'National Flag] ' Department of the Taoiseach "Youth Zone" web page.]

First introduced by in 1848, it was not until the of 1916, when it was raised above the General Post Office in , that the tricolour came to be regarded as the national flag. The flag was adopted in 1919 by the during its war of independence, and subsequently by the (1922&ndash;1937), later being given constitutional status under the 1937 . The tricolour is regarded by many nationalists as the national flag of the whole of island of . Thus it is flown (often controversially) by many nationalists in as well as by the . [Sugden, John & Harvie, Scott (1995). [http://cain.ulst.ac.uk/csc/reports/sugdenharvie/sugdenharvie95-3.htm Sport and Community Relations in Northern Ireland] , Centre for the Study of Conflict, School of History, Philosophy and Politics, Faculty of Humanities, . Retrieved on .] Historically the island has been represented by a number of other flags, including Saint Patrick's cross, and the flag of the four provinces of Ireland.

The shorter 's colours are the same but reversed in order.

From these Pantone colours Wikipedia has extrapolated the RGB, Hex and CMYK as: [ ]

The green pale in the flag symbolises the older majority Gaelic tradition of Ireland. Green had long been associated with Ireland as a nation, [The island is often referred to as the "Emerald Isle".]

It is claimed that often differing shades of , instead of orange, are seen at civilian functions. However the Department of the Taoiseach state that this is a misrepresentation which "should be actively discouraged" .

A green flag featuring a harp was an older symbol of the nation of , dating back at least to and the pursuits of from 1642. [ [http://www.crwflags.com/fotw/flags/ie-green.html Ireland: Green Flag] , "Flags of the World". Retrieved on .] It was subsequently widely adopted by the and especially the . A rival organisation, the , whose main strength was in the , and which was exclusively , was founded in 1795 in memory of King William of Orange and the "" of 1688. Following the , which pitted the "green" tradition of the republican against the Orange tradition of Anglican loyal to the , the ideal of a later nationalist generation in the mid-nineteenth century was to make peace between the two traditions and, if possible, to found a self-governing Ireland on such peace and union.

The oldest known reference to the use of the three colours of green, white and orange as a nationalist emblem dates from September 1830 when tricolour s were worn at a meeting held to celebrate the French Revolution of that year &mdash; a revolution which restored the use of the .

Although the tricolour was not forgotten as a symbol of the ideal of union and a banner associated with the Young Irelanders and revolution, it was rarely used between 1848 and 1916. Even up to the eve of the of 1916, the green flag featuring a harp held undisputed sway.

Associated with separatism in the past, flown during the Easter Rising of 1916 and capturing the national imagination as the banner of the new revolutionary Ireland, [Contrary to popular belief, the tricolour was not the actual flag of the , although it had been flown from the General Post Office; that flag was a green flag featuring in gold a harp and the words "Irish Republic".] the tricolour came to be acclaimed throughout the country as somewhat of a national flag. To many Irish people, though, it was considered to be a " flag". [Hayes-McCoy, Gerard Anthony (1979). "A History of Irish flags from Earliest Times". Academy Press, Dublin. ISBN 9780906187012.] It was used by the government in the Irish Free State, but not necessarily with the intention that it should become the national flag:

Use in Northern Ireland

The purported symbolism of the flag (peace and unity between Catholics and s) has not become a universal reality. In 1921, Ireland was partitioned, with the unionist-dominated north-east becoming , while later, in 1922, the remainder of Ireland left the to form the . [FitzGerald, Garret. [http://uk.encarta.msn.com/encyclopedia_761580394/Ireland_Partition_of.html Ireland, Partition of] , "", 2007. Retrieved on .] Northern Ireland continued to use the British and created its own derivation of the (with a crown on top of a six pointed star) to symbolise the state.

Despite its original symbolism, in Northern Ireland the tricolour, along with most other markers of either British or Irish identity, has come to be a symbol of division.

Under the 1998 , it was recognised that flags continue to be a source of disagreement in Northern Ireland. The Agreement stated that:Nationalists have pointed to this to argue that the use of the Union Flag for official purposes should be restricted, or that the tricolour should be flown alongside the British flag on government buildings. [ [http://www.sinnfein.ie/news/detail/13118 Alex Maskey Motion 39 - flags and emblems] , "SinnFein.ie", . Retrieved on .] Unionists argue that the recognition of the principle of consent in the Agreement &mdash; that Northern Ireland's constitutional status cannot change without a majority favouring it &mdash; by the signatories amounts to recognising that the Union Flag is the only legitimate official flag in Northern Ireland. [Wilson, Robin (July 2000). [http://cain.ulst.ac.uk/dd/papers/flags.htm Flagging concern: The Controversy over Flags and Emblems] , "Democratic Dialogue", Retrieved on .] [ [http://www.niassembly.gov.uk/record/reports/000606.htm#1 Northern Ireland Assembly Official Report of Tuesday 6 June 2000] , "Northern Ireland Assembly", . Retrieved on .] [ [http://www.niassembly.gov.uk/reports/nia15-00.htm Report on Draft Regulations proposed under Article 3 of the Flags (Northern Ireland) Order 2000] , "Northern Ireland Assembly", . Retrieved on .] Nonetheless some level of compromise has been achieved. As in the rest of the UK, the British flag is flown over Parliament Buildings and state offices on a limited number of named days &mdash; for example, those honouring Queen Elizabeth II's official birthday). [ [http://www.flags-flags-flags.org.uk/irish-flag.htm Irish Flag] , Flags and Nations of the World Index, 2005. Retrieved on .] Major exceptions to this rule are the City Hall in where the Union Flag is allowed to fly year-round, [ [http://www.belfastcity.gov.uk/equality/docs/FlyingOfUnionFlagEQIA.pdf Flying of the Union Flag: An Equality Impact Assessment] , "Belfast City Council", May 2004. Retrieved on .] and the local district councils. For instance, local councils such as the can choose to fly the Union Flag every day of the year, on designated days of the year, such as the , or not at all, like the or . [Bryan, Dr. Dominic (November 2005). [http://www.culcom.uio.no/aktivitet/flagg-konferanse/graphics/d.bryan%20flags%20paper.pdf Flagging Peace: Symbolic Space in a new Northern Ireland] , " DRAFT Flags, Oslo", p. 7.] A , , displayed both flags in his own offices, and this caused much controversy. [" [http://news.bbc.co.uk/2/hi/uk_news/northern_ireland/2236626.stm Tricolour raised in City Hall] ", "BBC News Online", . Retrieved on .] [ [http://news.bbc.co.uk/2/low/talking_point/2236871.stm Should Belfast have its own flag?] , "BBC News Talking Point", . Retrieved on .]

The fate of the Irish tricolour, designed to represent a compromise between two warring sides but ending up as representing one of them, parallels what happened to the French tricolour, which it emulated &mdash; which, in the early stages of the , was designed as a compromise between French republicans and French royalists (the and representing the former, and the ; the latter) but ended up as the quintessential republican flag from which later republics drew their inspiration.

In raising or lowering, the national flag should not be allowed to touch the ground. When being hoisted to , the flag should first be brought to the peak of the staff and then lowered to the half-mast position. [A flag is at in any position below the top of the staff but never below the middle point of the staff. As a general guide, the half-mast position may be taken as that where the top of the flag is the depth of the flag below the top of the staff.] It should again be brought to the peak of the staff before it is finally lowered. [ [http://www.taoiseach.gov.ie/attached_files/Pdf%20files/The%20National%20Flag.pdf The National Flag: Hoisting and lowering the Flag] , Department of the Taoiseach. ISBN 0-7-76-9101-X.] On ceremonial occasions when the national flag is being hoisted or lowered, or when it is passing by in a parade, all present should face it, stand to attention and salute. Persons in uniform who normally salute with the hand should give the hand salute. Persons in civilian attire should salute by standing to attention. The salute to the flag when it is being borne past in a parade is rendered when the flag is six paces away and the salute is held until the flag has passed by. Where more than one national flag is carried, the salute should be given only to the leading flag.

When the national flag has become worn or frayed it is no longer fit for display, and should not be used in any manner implying disrespect. [ [http://www.taoiseach.gov.ie/attached_files/Pdf%20files/The%20National%20Flag.pdf The National Flag: Worn-out Flag] , Department of the Taoiseach. ISBN 0-7-76-9101-X.] The national flag, when used as a decoration, should always be treated with due respect. It may be used as a discreet lapel button or rosette or as part of a centrepiece for a table. When used in the latter context with the flags of other nations, the national flag should also be displayed in the place of honour on a nearby flag staff. Where multiple national flags are flown on festive occasions these should be of uniform dimensions. Bunting of the national colours may also be used on festive occasions.

The national flag should be displayed in the open only between sunrise and sunset, except on the occasion of public meetings, processions, or funerals, when it may be displayed for the duration of such functions. [For military purposes, sunrise occurs at 8:00 a.m. between March and October, and at 8:30 a.m. between November and February. Sunset is deemed to occur at: 3:30 p.m. in January and December; 4:30 p.m. in February and November; 5:30 p.m. in March and October; 6:00 p.m. in April; 7:00 p.m. in May and September; and 8:00 p.m. between June and August.]

There are a number of other flags that represent or have done so in the past. Saint Patrick's saltire was incorporated into the British in 1801 by way of the to represent Ireland within the new . Although it never had official status outside of its role in the Union Flag, it has since become recognised as a symbol Ireland. Today, those who regard the tricolour as specific to the , or excluding of unionists, may advocate it as a neutral symbol of the whole island. However, others regard it as an unauthentic symbol. [ [http://www.doyle.com.au/st_pats_flag.htm St Patrick's Cross Flag] , "The Doyle Page", . Retrieved on .] The adapted versions have been used by the ,

Another flag which is used to represent the whole island is the flag of the four provinces. The four provinces flag is divided into four quadrants, each of which is the flag of one of the four . The four quadrants represent the provinces of (the top left quadrant), (the top right quadrant), (the bottom left quadrant) and (the bottom right quadrant). While it does not have any official status, it is often flown in support of the Irish rugby team. [ [http://www.yourirish.com/four-provinces-flag.htm Four Provinces of Ireland flag] , "Your Irish Culture of Ireland". Retrieved on .]

The "green flag" was a common flag used to represent Ireland during the nineteenth and early twentieth centuries. It consisted of a gold harp on a green background.