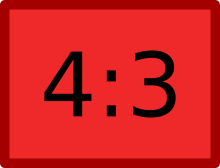 The ratio of width to height of standard-definition television.

In mathematics, a ratio is a relationship between two numbers of the same kind[1] (i.e., objects, persons, students, spoonfuls, units of whatever identical dimension), usually expressed as "a to b" or a:b, sometimes expressed arithmetically as a dimensionless quotient of the two[2] which explicitly indicates how many times the first number contains the second (not necessarily an integer).[3]

The ratio of numbers A and B can be expressed as:[4]

The numbers A and B are sometimes called terms with A being the antecedent and B being the consequent.

The proportion expressing the equality of the ratios A:B and C:D is written A:B=C:D or A:B::C:D. this latter form, when spoken or written in the English language, is often expressed as

It is impossible to trace the origin of the concept of ratio, since the ideas from which it developed would have been familiar to preliterate cultures. For example, the idea of one village being twice as large as another is so basic that it would have been understood in prehistoric society.[6] However, it is possible to trace the origin of the word "ratio" to the Ancient Greek λόγος (logos). Early translators rendered this into Latin as ratio ("reason"; as in the word "rational"). (A rational number may be expressed as the quotient of two integers.) A more modern interpretation of Euclid's meaning is more akin to computation or reckoning.[7] Medieval writers used the word proportio ("proportion") to indicate ratio and proportionalitas ("proportionality") for the equality of ratios.[8]

Euclid collected the results appearing in the Elements from earlier sources. The Pythagoreans developed a theory of ratio and proportion as applied to numbers.[9] The Pythagoreans' conception of number included only what would today be called rational numbers, casting doubt on the validity of the theory in geometry where, as the Pythagoreans also discovered, incommensurable ratios (corresponding to irrational numbers) exist. The discovery of a theory of ratios that does not assume commensurability is probably due to Eudoxus. The exposition of the theory of proportions that appears in Book VII of The Elements reflects the earlier theory of ratios of commensurables.[10]

The existence of multiple theories seems unnecessarily complex to modern sensibility since ratios are, to a large extent, identified with quotients. This is a comparatively recent development however, as can be seem from the fact that modern geometry textbooks still use distinct terminology and notation for ratios and quotients. The reasons for this are twofold. First, there was the previously mentioned reluctance to accept irrational numbers as true numbers. Second, the lack of a widely used symbolism to replace the already established terminology of ratios delayed the full acceptance of fractions as alternative until the 16th century.[11]

Definition 3 describes what a ratio is in a general way. It is not rigorous in a mathematical sense and some have ascribed it to Euclid's editors rather than Euclid himself.[13] Euclid defines a ratio to be between two quantities of the same type, so by this definition the ratios of two lengths or of two areas are defined, but not the ratio of a length and an area. Definition 4 makes this more rigorous. It states that a ratio of two quantities exists when there is a multiple of each which exceeds the other. In modern notation, a ratio exists between quantities p and q if there exist integers m and n so that mp>q and nq>m. This condition is known as the Archimedean property.

Definition 5 is the most complex and difficult; it defines what it means for two ratios to be equal. Today, this can be done by simply stating that ratios are equal when the quotients of the terms are equal, but Euclid did not accept the existence of the quotients of incommensurables, so such a definition would have been meaningless to him. Thus, a more subtle definition is needed where quantities involved are not measured directly to one another. Though it may not be possible to assign a rational value to a ratio, it is possible to compare a ratio with a rational number. Specifically, given two quantities, p and q, and a rational number m/n we can say that the ratio of p to q is less than, equal to, or greater than m/n when np is less than, equal to, or greater than mq respectively. Euclid's definition of equality can be stated as that two ratios are equal when they behave identically with respect to being less than, equal to, or greater than any rational number. In modern notation this says that given quantities p, q, r and s, then p:q::r:s if for any positive integers m and n, np<mq, np=mq, np>mq according as nr<ms, nr=ms, nr>ms respectively. There is a remarkable similarity between this definition and the theory of Dedekind cuts used in the modern definition of irrational numbers.[14]

Definition 6 says that quantities that have the same ratio are proportional or in proportion. Euclid uses the Greek ἀναλόγον (analogon), this has the same root as λόγος and is related to the English word "analog".

Definition 7 defines what it means for one ratio to be less than or greater than another and is based on the ideas present in definition 5. In modern notation it says that given quantities p, q, r and s, then p:q>r:s if there are positive integers m and n so that np>mq and nr≤ms.

The quantities being compared in a ratio might be physical quantities such as speed, or may simply refer to amounts of particular objects. A common example of the latter case is the weight ratio of water to cement used in concrete, which is commonly stated as 1:4. This means that the weight of cement used is four times the weight of water used. It does not say anything about the total amounts of cement and water used, nor the amount of concrete being made. Equivalently it could be said that the ratio of cement to water is 4:1, that there is 4 times as much cement as water, or that there is a quarter (1/4) as much water as cement..

Older televisions have a 4:3 "aspect ratio", which means that the width is 4/3 of the height; modern widescreen TVs have a 16:9 aspect ratio.

If there are 2 oranges and 3 apples, the ratio of oranges to apples is 2:3, whereas the fraction of oranges to total fruit is 2/5.

In general, when comparing the quantities of a two-quantity ratio, this can be expressed as a fraction derived from the ratio. For example, in a ratio of 2:3, the amount/size/volume/number of the first quantity will be

that of the second quantity. This pattern also works with ratios with more than two terms. However, a ratio with more than two terms cannot be completely converted into a single fraction; a single fraction represents only one part of the ratio since a fraction can only compare two numbers. If the ratio deals with objects or amounts of objects, this is often expressed as "for every two parts of the first quantity there are three parts of the second quantity".

If we multiply all quantities involved in a ratio by the same number, the ratio remains valid. For example, a ratio of 3:2 is the same as 12:8. It is usual either to reduce terms to the lowest common denominator, or to express them in parts per hundred (percent).

If the two or more ratio quantities encompass all of the quantities in a particular situation, for example two apples and three oranges in a fruit basket containing no other types of fruit, it could be said that "the whole" contains five parts, made up of two parts apples and three parts oranges. In this case,

, or 60% of the whole are oranges. This comparison of a specific quantity to "the whole" is sometimes called a proportion. Proportions are sometimes expressed as percentages as demonstrated above.

Note that ratios can be reduced (as fractions are) by dividing each quantity by the common factors of all the quantities. This is often called "cancelling." As for fractions, the simplest form is considered to be that in which the numbers in the ratio are the smallest possible integers.

Thus, the ratio 40:60 may be considered equivalent in meaning to the ratio 2:3 within contexts concerned only with relative quantities.

A ratio that has integers for both quantities and that cannot be reduced any further (using integers) is said to be in simplest form or lowest terms.

Sometimes it is useful to write a ratio in the form 1:n or n:1 to enable comparisons of different ratios.

Where the context makes the meaning clear, a ratio in this form is sometimes written without the 1 and the colon, though, mathematically, this makes it a factor or multiplier.

Ratios are often used for simple dilutions applied in chemistry and biology. A simple dilution is one in which a unit volume of a liquid material of interest is combined with an appropriate volume of a solvent liquid to achieve the desired concentration. The dilution factor is the total number of unit volumes in which your material will be dissolved. The diluted material must then be thoroughly mixed to achieve the true dilution. For example, a 1:5 dilution (verbalize as "1 to 5" dilution) entails combining 1 unit volume of solute (the material to be diluted) + 4 unit volumes (approximately) of the solvent to give 5 units of the total volume. (Some solutions and mixtures take up slightly less volume than their components.)

There is often confusion between dilution ratio (1:n meaning 1 part solute to n parts solvent) and dilution factor (1:n+1) where the second number (n+1) represents the total volume of solute + solvent. In scientific and serial dilutions, the given ratio (or factor) often means the ratio to the final volume, not to just the solvent. The factors then can easily be multiplied to give an overall dilution factor.

In other areas of science such as pharmacy, and in non-scientific usage, a dilution is normally given as a plain ratio of solvent to solute.

Odds (as in gambling) are expressed as a ratio. For example, odds of "7 to 3 against" (7:3) mean that there are seven chances that the event will not happen to every three chances that it will happen.

Ratios are unitless when they relate quantities which have units of the same dimension.

For example, the ratio 1 minute : 40 seconds can be reduced by changing the first value to 60 seconds. Once the units are the same, they can be omitted, and the ratio can be reduced to 3:2.

In chemistry, mass concentration "ratios" are usually expressed as w/v percentages, and are really proportions.

For example, a concentration of 3% w/v usually means 3g of substance in every 100mL of solution. This cannot easily be converted to a pure ratio because of density considerations, and the second figure is the total amount, not the volume of solvent