In mathematics, a rational number is any number that can be expressed as the quotient or fraction a/b of two integers, with the denominator b not equal to zero. Since b may be equal to 1, every integer is a rational number. The set of all rational numbers is usually denoted by a boldface Q (or blackboard bold

, Unicode, which stands for quotient.)

The decimal expansion of a rational number always either terminates after finitely many digits or begins to repeat the same finite sequence of digits over and over. Moreover, any repeating or terminating decimal represents a rational number. These statements hold true not just for base 10, but also for binary, hexadecimal, or any other integer base.

Zero divided by any other integer equals zero, therefore zero is a rational number (but division by zero is undefined).

Two rational numbers a/b and c/d are equal if, and only if, ad = bc.

Two fractions are added as follows

The rule for multiplication is

Additive and multiplicative inverses exist in the rational numbers

It follows that the quotient of two fractions is given by

Any positive rational number can be expressed as a sum of distinct reciprocals of positive integers, such as

For any positive rational number, there are infinitely many different such representations, called Egyptian fractions, as they were used by the ancient Egyptians. The Egyptians also had a different notation for dyadic fractions in the Akhmim Wooden Tablet and several Rhind Mathematical Papyrus problems.

Mathematically we may construct the rational numbers as equivalence classes of ordered pairs of integers (m,n), with n ≠ 0. This space of equivalence classes is the quotient space (Z × (Z ∖ {0})) / ∼, where (m1,n1) ∼ (m2,n2) if, and only if, m1n2 − m2n1 = 0. We can define addition and multiplication of these pairs with the following rules:

The integers may be considered to be rational numbers by the embedding that maps m to [(m, 1)]. 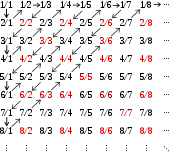 a diagram illustrating the countability of the rationals

The set Q, together with the addition and multiplication operations shown above, forms a field, the field of fractions of the integers Z.

The algebraic closure of Q, i.e. the field of roots of rational polynomials, is the algebraic numbers.

The rationals are a densely ordered set: between any two rationals, there sits another one, and, therefore, infinitely many other ones. Any totally ordered set which is countable, dense (in the above sense), and has no least or greatest element is order isomorphic to the rational numbers.

In addition to the absolute value metric mentioned above, there are other metrics which turn Q into a topological field:

Let p be a prime number and for any non-zero integer a, let |a|p = p−n, where pn is the highest power of p dividing a.