The binary numeral system, or base-2 number system, represents numeric values using two symbols, 0 and 1. More specifically, the usual base-2 system is a positional notation with a radix of 2. Because of its straightforward implementation in digital electronic circuitry using logic gates, the binary system is used internally by almost all modern computers.

The Indian scholar Pingala (circa 5th–2nd centuries BC) developed mathematical concepts for describing prosody, and in so doing presented the first known description of a binary numeral system.[1][2] He used binary numbers in the form of short and long syllables (the latter equal in length to two short syllables), making it similar to Morse code.[3][4]

A set of eight trigrams and a set of 64 hexagrams, analogous to the three-bit and six-bit binary numerals, were known in ancient China through the classic text I Ching. In the 11th century, scholar and philosopher Shao Yong developed a method for arranging the hexagrams which corresponds to the sequence 0 to 63, as represented in binary, with yin as 0, yang as 1 and the least significant bit on top. There is, however, no evidence that Shao understood binary computation. The ordering is also the lexicographical order on sextuples of elements chosen from a two-element set.[7]

Similar sets of binary combinations have also been used in traditional African divination systems such as Ifá as well as in medieval Western geomancy. The base-2 system utilized in geomancy had long been widely applied in sub-Saharan Africa.

In 1605 Francis Bacon discussed a system whereby letters of the alphabet could be reduced to sequences of binary digits, which could then be encoded as scarcely visible variations in the font in any random text.[8] Importantly for the general theory of binary encoding, he added that this method could be used with any objects at all: "provided those objects be capable of a twofold difference only; as by Bells, by Trumpets, by Lights and Torches, by the report of Muskets, and any instruments of like nature".[8] (See Bacon's cipher.)

The modern binary number system was studied by Gottfried Leibniz in 1679. See his article:Explication de l'Arithmétique Binaire[9](1703). Leibniz's system uses 0 and 1, like the modern binary numeral system. As a Sinophile, Leibniz was aware of the I Ching and noted with fascination how its hexagrams correspond to the binary numbers from 0 to 111111, and concluded that this mapping was evidence of major Chinese accomplishments in the sort of philosophical mathematics he admired.[10]

In 1854, British mathematician George Boole published a landmark paper detailing an algebraic system of logic that would become known as Boolean algebra. His logical calculus was to become instrumental in the design of digital electronic circuitry.[11]

In November 1937, George Stibitz, then working at Bell Labs, completed a relay-based computer he dubbed the "Model K" (for "Kitchen", where he had assembled it), which calculated using binary addition.[13] Bell Labs thus authorized a full research programme in late 1938 with Stibitz at the helm. Their Complex Number Computer, completed January 8, 1940, was able to calculate complex numbers. In a demonstration to the American Mathematical Society conference at Dartmouth College on September 11, 1940, Stibitz was able to send the Complex Number Calculator remote commands over telephone lines by a teletype. It was the first computing machine ever used remotely over a phone line. Some participants of the conference who witnessed the demonstration were John Von Neumann, John Mauchly and Norbert Wiener, who wrote about it in his memoirs.[14][15][16] 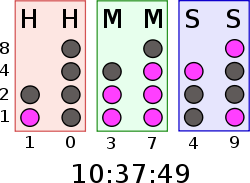 A binary clock might use LEDs to express binary values. In this clock, each column of LEDs shows a binary-coded decimal numeral of the traditional sexagesimal time.

The numeric value represented in each case is dependent upon the value assigned to each symbol. In a computer, the numeric values may be represented by two different voltages; on a magnetic disk, magnetic polarities may be used. A "positive", "yes", or "on" state is not necessarily equivalent to the numerical value of one; it depends on the architecture in use.

In keeping with customary representation of numerals using Arabic numerals, binary numbers are commonly written using the symbols 0 and 1. When written, binary numerals are often subscripted, prefixed or suffixed in order to indicate their base, or radix. The following notations are equivalent:

When the symbols for the first digit are exhausted, the next-higher digit (to the left) is incremented, and counting starts over at 0. In decimal, counting proceeds like so:

is converted to decimal form by:

To create higher numbers, additional digits are simply added to the left side of the binary representation.

Arithmetic in binary is much like arithmetic in other numeral systems. Addition, subtraction, multiplication, and division can be performed on binary numerals.

The circuit diagram for a binary half adder, which adds two bits together, producing sum and carry bits.

Adding two "1" digits produces a digit "0", while 1 will have to be added to the next column. This is similar to what happens in decimal when certain single-digit numbers are added together; if the result equals or exceeds the value of the radix (10), the digit to the left is incremented:

This is known as carrying. When the result of an addition exceeds the value of a digit, the procedure is to "carry" the excess amount divided by the radix (that is, 10/10) to the left, adding it to the next positional value. This is correct since the next position has a weight that is higher by a factor equal to the radix. Carrying works the same way in binary:

When computers must add two numbers, the rule that: x xor y = (x + y) mod 2 for any two bits x and y allows for very fast calculation, as well.

A simplification for many binary addition problems is the Long Carry Method or Brookhouse Method of Binary Addition. This method is generally useful in any binary addition where one of the numbers has a long string of “1” digits. For example the following large binary numbers can be added in two simple steps without multiple carries from one place to the next.

The binary addition table is similar, but not the same, as the Truth table of the Logical disjunction operation

. The difference is that 1

Subtraction works in much the same way:

Subtracting a "1" digit from a "0" digit produces the digit "1", while 1 will have to be subtracted from the next column. This is known as borrowing. The principle is the same as for carrying. When the result of a subtraction is less than 0, the least possible value of a digit, the procedure is to "borrow" the deficit divided by the radix (that is, 10/10) from the left, subtracting it from the next positional value.

Multiplication in binary is similar to its decimal counterpart. Two numbers A and B can be multiplied by partial products: for each digit in B, the product of that digit in A is calculated and written on a new line, shifted leftward so that its rightmost digit lines up with the digit in B that was used. The sum of all these partial products gives the final result.

For example, the binary numbers 1011 and 1010 are multiplied as follows:

Binary numbers can also be multiplied with bits after a binary point:

Binary division is again similar to its decimal counterpart:

The procedure is then repeated with the new sequence, continuing until the digits in the dividend have been exhausted:

Though not directly related to the numerical interpretation of binary symbols, sequences of bits may be manipulated using Boolean logical operators. When a string of binary symbols is manipulated in this way, it is called a bitwise operation; the logical operators AND, OR, and XOR may be performed on corresponding bits in two binary numerals provided as input. The logical NOT operation may be performed on individual bits in a single binary numeral provided as input. Sometimes, such operations may be used as arithmetic short-cuts, and may have other computational benefits as well. For example, an arithmetic shift left of a binary number is the equivalent of multiplication by a (positive, integral) power of 2.

Conversion to and from other numeral systems

Conversion from base-2 to base-10 proceeds by applying the preceding algorithm, so to speak, in reverse. The bits of the binary number are used one by one, starting with the most significant (leftmost) bit. Beginning with the value 0, repeatedly double the prior value and add the next bit to produce the next value. This can be organized in a multi-column table. For example to convert 100101011012 to decimal:

The result is 119710. Note that the first Prior Value of 0 is simply an initial decimal value. This method is an application of the Horner scheme.

The fractional parts of a number are converted with similar methods. They are again based on the equivalence of shifting with doubling or halving.

, etc. So if there is a 1 in the first place after the decimal, then the number is at least

, and vice versa. Double that number is at least 1. This suggests the algorithm: Repeatedly double the number to be converted, record if the result is at least 1, and then throw away the integer part.

This is also a repeating binary fraction 0.00011... . It may come as a surprise that terminating decimal fractions can have repeating expansions in binary. It is for this reason that many are surprised to discover that 0.1 + ... + 0.1, (10 additions) differs from 1 in floating point arithmetic. In fact, the only binary fractions with terminating expansions are of the form of an integer divided by a power of 2, which 1/10 is not.

The final conversion is from binary to decimal fractions. The only difficulty arises with repeating fractions, but otherwise the method is to shift the fraction to an integer, convert it as above, and then divide by the appropriate power of two in the decimal base. For example:

For very large numbers, these simple methods are inefficient because they perform a large number of multiplications or divisions where one operand is very large. A simple divide-and-conquer algorithm is more effective asymptotically: given a binary number, it is divided by 10k, where k is chosen so that the quotient roughly equals the remainder; then each of these pieces is converted to decimal and the two are concatenated. Given a decimal number, it can be split into two pieces of about the same size, each of which is converted to binary, whereupon the first converted piece is multiplied by 10k and added to the second converted piece, where k is the number of decimal digits in the second, least-significant piece before conversion.

To convert a hexadecimal number into its binary equivalent, simply substitute the corresponding binary digits:

To convert a binary number into its hexadecimal equivalent, divide it into groups of four bits. If the number of bits isn't a multiple of four, simply insert extra 0 bits at the left (called padding). For example:

Binary is also easily converted to the octal numeral system, since octal uses a radix of 8, which is a power of two (namely, 23, so it takes exactly three binary digits to represent an octal digit). The correspondence between octal and binary numerals is the same as for the first eight digits of hexadecimal in the table above. Binary 000 is equivalent to the octal digit 0, binary 111 is equivalent to octal 7, and so forth.

Converting from octal to binary proceeds in the same fashion as it does for hexadecimal:

And from binary to octal:

And from octal to decimal:

Non-integers can be represented by using negative powers, which are set off from the other digits by means of a radix point (called a decimal point in the decimal system). For example, the binary number 11.012 thus means:

The phenomenon that the binary representation of any rational is either terminating or recurring also occurs in other radix-based numeral systems. See, for instance, the explanation in decimal. Another similarity is the existence of alternative representations for any terminating representation, relying on the fact that 0.111111… is the sum of the geometric series 2−1 + 2−2 + 2−3 + ... which is 1.

Binary numerals which neither terminate nor recur represent irrational numbers. For instance,