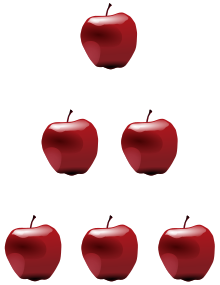 Natural numbers can be used for counting (one apple, two apples, three apples, ...) from top to bottom.

In mathematics, the natural numbers are the ordinary whole numbers used for counting ("there are 6 coins on the table") and ordering ("this is the 3rd largest city in the country"). These purposes are related to the linguistic notions of cardinal and ordinal numbers, respectively (see English numerals). A more recent notion is that of a nominal number, which is used only for naming.

Properties of the natural numbers related to divisibility, such as the distribution of prime numbers, are studied in number theory. Problems concerning counting and ordering, such as partition enumeration, are studied in combinatorics.

There is no universal agreement about whether to include zero in the set of natural numbers: some define the natural numbers to be the positive integers {1, 2, 3, ...}, while for others the term designates the non-negative integers {0, 1, 2, 3, ...}. The former definition is the traditional one, with the latter definition first appearing in the 19th century. Some authors use the term natural number to exclude zero and whole number to include it; others use whole number in a way that excludes zero, or in a way that includes both zero and the negative integers.

History of natural numbers and the status of zero

The natural numbers had their origins in the words used to count things, beginning with the number 1.

The first major advance in abstraction was the use of numerals to represent numbers. This allowed systems to be developed for recording large numbers. The ancient Egyptians developed a powerful system of numerals with distinct hieroglyphs for 1, 10, and all the powers of 10 up to over one million. A stone carving from Karnak, dating from around 1500 BC and now at the Louvre in Paris, depicts 276 as 2 hundreds, 7 tens, and 6 ones; and similarly for the number 4,622. The Babylonians had a place-value system based essentially on the numerals for 1 and 10.

A much later advance was the development of the idea that zero can be considered as a number, with its own numeral. The use of a zero digit in place-value notation (within other numbers) dates back as early as 700 BC by the Babylonians, but they omitted such a digit when it would have been the last symbol in the number.[1] The Olmec and Maya civilizations used zero as a separate number as early as the 1st century BC, but this usage did not spread beyond Mesoamerica. The use of a numeral zero in modern times originated with the Indian mathematician Brahmagupta in 628. However, zero had been used as a number in the medieval computus (the calculation of the date of Easter), beginning with Dionysius Exiguus in 525, without being denoted by a numeral (standard Roman numerals do not have a symbol for zero); instead nulla or nullae, genitive of nullus, the Latin word for "none", was employed to denote a zero value.[2]

The first systematic study of numbers as abstractions (that is, as abstract entities) is usually credited to the Greek philosophers Pythagoras and Archimedes. Note that many Greek mathematicians did not consider 1 to be "a number", so to them 2 was the smallest number.[3]

Independent studies also occurred at around the same time in India, China, and Mesoamerica.[citation needed]

Several set-theoretical definitions of natural numbers were developed in the 19th century. With these definitions it was convenient to include 0 (corresponding to the empty set) as a natural number. Including 0 is now the common convention among set theorists, logicians, and computer scientists. Many other mathematicians also include 0, although some have kept the older tradition and take 1 to be the first natural number.[4] Sometimes the set of natural numbers with 0 included is called the set of whole numbers or counting numbers. On the other hand, while integer being Latin for whole, the integers usually stand for the negative and positive whole numbers (and zero) altogether.

Mathematicians use N or

(an N in blackboard bold, displayed as ℕ in Unicode) to refer to the set of all natural numbers. This set is countably infinite: it is infinite but countable by definition. This is also expressed by saying that the cardinal number of the set is aleph-null

Some authors who exclude zero from the naturals use the terms natural numbers with zero, whole numbers, or counting numbers, denoted W, for the set of nonnegative integers. Others use the notation P for the positive integers if there is no danger of confusing this with the prime numbers.

Set theorists often denote the set of all natural numbers including zero by a lower-case Greek letter omega: ω. This stems from the identification of an ordinal number with the set of ordinals that are smaller. One may observe that adopting the von Neumann definition of ordinals and defining cardinal numbers as minimal ordinals among those with same cardinality, one gets

The addition (+) and multiplication (×) operations on natural numbers have several algebraic properties:

Analogously, given that addition has been defined, a multiplication × can be defined via a × 0 = 0 and a × S(b) = (a × b) + a. This turns (N*, ×) into a free commutative monoid with identity element 1; a generator set for this monoid is the set of prime numbers. Addition and multiplication are compatible, which is expressed in the distribution law: a × (b + c) = (a × b) + (a × c). These properties of addition and multiplication make the natural numbers an instance of a commutative semiring. Semirings are an algebraic generalization of the natural numbers where multiplication is not necessarily commutative. The lack of additive inverses, which is equivalent to the fact that N is not closed under subtraction, means that N is not a ring; instead it is a semiring (also known as a rig).

For the remainder of the article, we write ab to indicate the product a × b, and we also assume the standard order of operations.

The number q is called the quotient and r is called the remainder of division of a by b. The numbers q and r are uniquely determined by a and b. This, the Division algorithm, is key to several other properties (divisibility), algorithms (such as the Euclidean algorithm), and ideas in number theory.

Two generalizations of natural numbers arise from the two uses:

Many well-ordered sets with cardinal number

have an ordinal number greater than ω (the latter is the lowest possible). The least ordinal of cardinality

For finite well-ordered sets, there is one-to-one correspondence between ordinal and cardinal numbers; therefore they can both be expressed by the same natural number, the number of elements of the set. This number can also be used to describe the position of an element in a larger finite, or an infinite, sequence.

Hypernatural numbers are part of a non-standard model of arithmetic due to Skolem.

Other generalizations are discussed in the article on numbers.

Historically, the precise mathematical definition of the natural numbers developed with some difficulty. The Peano axioms state conditions that any successful definition must satisfy. Certain constructions show that, given set theory, models of the Peano postulates must exist.

The Peano axioms give a formal theory of the natural numbers. The axioms are:

It should be noted that the "0" in the above definition need not correspond to what we normally consider to be the number zero. "0" simply means some object that when combined with an appropriate successor function, satisfies the Peano axioms. All systems that satisfy these axioms are isomorphic, the name "0" is used here for the first element (the term "zeroth element" has been suggested to leave "first element" to "1", "second element" to "2", etc.), which is the only element that is not a successor. For example, the natural numbers starting with one also satisfy the axioms, if the symbol 0 is interpreted as the natural number 1, the symbol S(0) as the number 2, etc. In fact, in Peano's original formulation, the first natural number was 1.

Constructions based on set theory

A standard construction in set theory, a special case of the von Neumann ordinal construction, is to define the natural numbers as follows:

Also, with this definition, different possible interpretations of notations like Rn (n-tuples versus mappings of n into R) coincide.

Although the standard construction is useful, it is not the only possible construction. For example: