In number theory, a branch of mathematics, two integers a and b are said to be coprime (also spelled co-prime) or relatively prime if the only positive integer that evenly divides both of them is 1. This is the same thing as their greatest common divisor being 1.[1] In addition to

b is sometimes used to indicate that a and b are relatively prime.[2]

For example, 14 and 15 are coprime, being commonly divisible by only 1, but 14 and 21 are not, because they are both divisible by 7. The numbers 1 and −1 are coprime to every integer, and they are the only integers to be coprime with 0.

A fast way to determine whether two numbers are coprime is given by the Euclidean algorithm.

The number of integers coprime to a positive integer n, between 1 and n, is given by Euler's totient function (or Euler's phi function) φ(n). 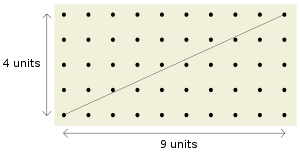 Figure 1. The numbers 4 and 9 are coprime. Therefore, the diagonal of a 4 x 9 lattice does not intersect any other lattice points

There are a number of conditions which are equivalent to a and b being coprime:

As a consequence of the third point, if a and b are coprime and br ≡ bs (mod a), then r ≡ s (mod a) (because we may "divide by b" when working modulo a). Furthermore, if b1 and b2 are both coprime with a, then so is their product b1b2 (modulo a it is a product of invertible elements, and therefore invertible); this also follows from the first point by Euclid's lemma, which states that if a prime number p divides a product bc, then p divides at least one of the factors b, c.

As a consequence of the first point, if a and b are coprime, then so are any powers ak and bl.

If a and b are coprime and a divides the product bc, then a divides c. This can be viewed as a generalization of Euclid's lemma.

The two integers a and b are coprime if and only if the point with coordinates (a, b) in a Cartesian coordinate system is "visible" from the origin (0,0), in the sense that there is no point with integer coordinates between the origin and (a, b). (See figure 1.)

In a sense that can be made precise, the probability that two randomly chosen integers are coprime is 6/π2 (see pi), which is about 61%. See below.

If n≥1 and is an integer, the numbers coprime to n, taken modulo n, form a group with multiplication as operation; it is written as (Z/nZ)× or Zn*.

Two ideals A and B in the commutative ring R are called coprime (or comaximal) if A + B = R. This generalizes Bézout's identity: with this definition, two principal ideals (a) and (b) in the ring of integers Z are coprime if and only if a and b are coprime.

If the ideals A and B of R are coprime, then AB = A∩B; furthermore, if C is a third ideal such that A contains BC, then A contains C. The Chinese remainder theorem is an important statement about coprime ideals.

Here ζ refers to the Riemann zeta function, the identity relating the product over primes to ζ(2) is an example of an Euler product, and the evaluation of ζ(2) as π2/6 is the Basel problem, solved by Leonhard Euler in 1735. In general, the probability of k randomly chosen integers being coprime is 1/ζ(k).

There is often confusion about what a "randomly chosen integer" is. One way of understanding this is to assume that the integers are chosen randomly between 1 and an integer N. Then, for each upper bound N, there is a probability PN that two randomly chosen numbers are coprime. This will never be exactly 6 / π2, but in the limit as

All pairs of coprime numbers m,n can be generated in a parent-3 children-9 grandchildren... family tree starting from (2,1) (for even-odd or odd-even pairs)[4] or from (3,1) (for odd-odd pairs),[5] with three branches from each node. The branches are generated as follows:

This family tree is exhaustive and non-redundant with no invalid members.