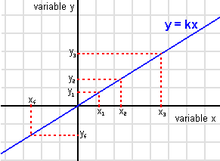 y is directly proportional to x.

where no term is zero, is called a proportion. 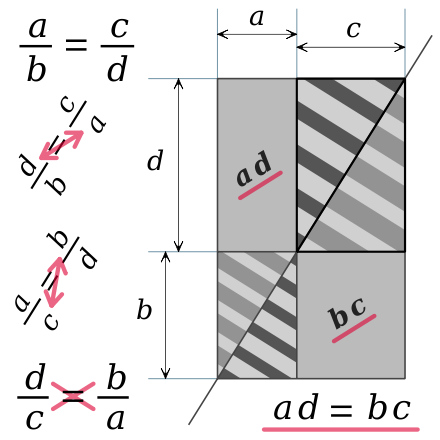 When the duplication of a given rectangle preserves its shape, the ratio of the large dimension to the small dimension is a constant number in all the copies, and in the original rectangle. The largest rectangle of the drawing is similar to one or the other rectangle with stripes. From their width to their height, the coefficient is

A ratio of their dimensions horizontally written within the image, at the top or the bottom, determines the common shape of the three similar rectangles.

The common diagonal of the similar rectangles divides each rectangle into two superposable triangles, with two different kinds of stripes. The four striped triangles and the two striped rectangles have a common vertex: the center of an homothetic transformation with a negative ratio – k  or

,  that transforms one triangle and its stripes into another triangle with the same stripes, enlarged or reduced. The duplication scale of a striped triangle is the proportionality constant between the corresponding sides lengths of the triangles, equal to a positive ratio obliquely written within the image:

Consider dividing the largest rectangle in two triangles, cutting along the diagonal. If we remove two triangles from either half rectangle, we get one of the plain gray rectangles. Above and below this diagonal, the areas of the two biggest triangles of the drawing are equal, because these triangles are superposable. Above and below the subtracted areas are equal for the same reason. Therefore, the two plain gray rectangles have the same area:  a d = b c.

The mathematical symbol '∝' is used to indicate that two values are proportional. For example, A ∝ B.

Given two variables x and y, y is (directly) proportional to x (x and y vary directly, or x and y are in direct variation) if there is a non-zero constant k such that

The relation is often denoted

and the constant ratio

If y is proportional to x, then the graph of y as a function of x will be a straight line passing through the origin with the slope of the line equal to the constant of proportionality: it corresponds to linear growth.

The graph of two variables varying inversely on the Cartesian coordinate plane is a hyperbola. The product of the X and Y values of each point on the curve will equal the constant of proportionality (k). Since neither x nor y can equal zero (if k is non-zero), the graph will never cross either axis.

To determine experimentally whether two physical quantities are directly proportional, one performs several measurements and plots the resulting data points in a Cartesian coordinate system. If the points lie on or close to a straight line that passes through the origin (0, 0), then the two variables are probably proportional, with the proportionality constant given by the line's slope.