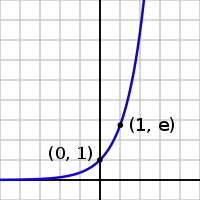 The graph of y = ex is upward-sloping, and increases faster as x increases. The graph always lies above the x-axis but can get arbitrarily close to it for negative x; thus, the x-axis is a horizontal asymptote. The slope of the tangent to the graph at each point is equal to its y coordinate at that point. The inverse function is the natural logarithm ln(x); because of this, some old texts[which?] refer to the exponential function as the antilogarithm.

Sometimes the term exponential function is used more generally for functions of the form cbx, where the base b is any positive real number, not necessarily e. See exponential growth for this usage.

In general, the variable x can be any real or complex number, or even an entirely different kind of mathematical object; see the formal definition below.

The exponential function arises whenever a quantity grows or decays at a rate proportional to its current value. One such situation is continuously compounded interest, and in fact it was this that led Jacob Bernoulli in 1683[3] to the number

now known as e. Later, in 1697, Johann Bernoulli studied the calculus of the exponential function.[3]

If a principal amount of 1 earns interest at an annual rate of x compounded monthly, then the interest earned each month is x/12 times the current value, so each month the total value is multiplied by (1+x/12), and the value at the end of the year is (1+x/12)12. If instead interest is compounded daily, this becomes (1+x/365)365. Letting the number of time intervals per year grow without bound leads to the limit definition of the exponential function,

first given by Euler.[4] This is one of a number of characterizations of the exponential function; others involve series or differential equations.

From any of these definitions it can be shown that the exponential function obeys the basic exponentiation identity,

which is why it can be written as ex.

The exponential function (in blue), and the sum of the first n + 1 terms of the power series on the left (in red).

The exponential function ex can be characterized in a variety of equivalent ways. In particular it may be defined by the following power series[5]:

Using an alternate definition for the exponential function leads to the same result when expanded as a Taylor series.

Less commonly, ex is defined as the solution y to the equation

It is also the following limit: 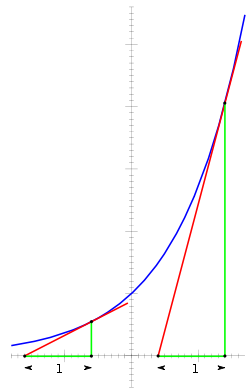 The derivative of the exponential function is equal to the value of the function. From any point P on the curve (blue), if a tangent line (red), and a vertical line (green) are drawn as shown, then the triangle these lines make with the x-axis will have a base (green) of length 1. So the slope of the tangent line (the derivative) at that point P is equal to the height of the triangle (the value of the function).

The importance of the exponential function in mathematics and the sciences stems mainly from properties of its derivative. In particular,

That is, ex is its own derivative and hence is a simple example of a Pfaffian function. Functions of the form cex for constant c are the only functions with that property (by the Picard–Lindelöf theorem) Other ways of saying the same thing include:

If a variable's growth or decay rate is proportional to its size—as is the case in unlimited population growth (see Malthusian catastrophe), continuously compounded interest, or radioactive decay—then the variable can be written as a constant times an exponential function of time. Explicitly for any real constant k, a function f: R→R satisfies f′ = kf if and only if f(x) = cekx for some constant c.

Furthermore for any differentiable function f(x), we find, by the chain rule:

A continued fraction for ex can be obtained via an identity of Euler: 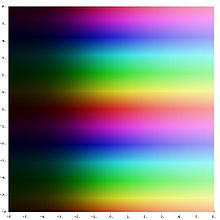 As in the real case, the exponential function can be defined on the complex plane in several equivalent forms. Some of these definitions mirror the formulas for the real-valued exponential function. Specifically, one can still use the power series definition, where the real value is replaced by a complex one:

Using this definition, it is easy to show why

holds in the complex plane.

When considered as a function defined on the complex plane, the exponential function retains the important properties

Extending the natural logarithm to complex arguments yields a multi-valued function, ln(z). We can then define a more general exponentiation:

See failure of power and logarithm identities for more about problems with combining powers.

Computation of ab where both a and b are complex

Complex exponentiation ab can be defined by converting a to polar coordinates and using the identity (eln(a))b = ab:

However, when b is not an integer, this function is multivalued, because θ is not unique (see failure of power and logarithm identities).

The power series definition of the exponential function makes sense for square matrices (for which the function is called the matrix exponential) and more generally in any Banach algebra B. In this setting, e0 = 1, and ex is invertible with inverse e−x for any x in B. If xy =yx, then ex+y = exey, but this identity can fail for noncommuting x and y.

Some alternative definitions lead to the same function. For instance, ex can be defined as

Given a Lie group G and its associated Lie algebra

, the exponential map is a map

The identity exp(x+y) = exp(x)exp(y) can fail for Lie algebra elements x and y that do not commute; the Baker–Campbell–Hausdorff formula supplies the necessary correction terms.

The term double exponential function can have two meanings:

and double Mersenne numbers generated by

are examples of double exponential functions.

Similar properties of e and the function ez

The function ez is not in C(z) (i.e., is not the quotient of two polynomials with complex coefficients).

The function ez is transcendental over C(z).