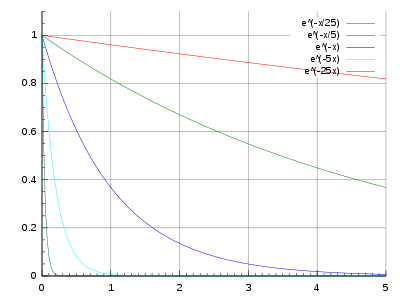 A quantity is said to be subject to exponential decay if it decreases at a rate proportional to its value. Symbolically, this process can be expressed by the following differential equation, where N is the quantity and λ (lambda) is a positive number called the decay constant:

The solution to this equation (see derivation below) is: Exponential rate of change

If the decaying quantity, N(t), is the number of discrete elements in a certain set, it is possible to compute the average length of time that an element remains in the set. This is called the mean lifetime (or simply the lifetime), τ, and it can be shown that it relates to the decay rate, λ, in the following way:

A very similar equation will be seen below, which arises when the base of the exponential is chosen to be 2, rather than e. In that case the scaling time is the "half-life".

A more intuitive characteristic of exponential decay for many people is the time required for the decaying quantity to fall to one half of its initial value. This time is called the half-life, and often denoted by the symbol t1/2. The half-life can be written in terms of the decay constant, or the mean lifetime, as:

When this expression is inserted for τ in the exponential equation above, and ln 2 is absorbed into the base, this equation becomes:

Therefore, the mean lifetime τ is equal to the half-life divided by the natural log of 2, or:

Solution of the differential equation

The equation that describes exponential decay is

where C is the constant of integration, and hence

where the final substitution, N0 = eC, is obtained by evaluating the equation at t = 0, as N0 is defined as being the quantity at t = 0.

This is the form of the equation that is most commonly used to describe exponential decay. Any one of decay constant, mean lifetime, or half-life is sufficient to characterise the decay. The notation λ for the decay constant is a remnant of the usual notation for an eigenvalue. In this case, λ is the eigenvalue of the opposite of the differentiation operator with N(t) as the corresponding eigenfunction. The units of the decay constant are s−1.

Derivation of the mean lifetime

Given an assembly of elements, the number of which decreases ultimately to zero, the mean lifetime, τ, (also called simply the lifetime) is the expected value of the amount of time before an object is removed from the assembly. Specifically, if the individual lifetime of an element of the assembly is the time elapsed between some reference time and the removal of that element from the assembly, the mean lifetime is the arithmetic mean of the individual lifetimes.

Starting from the population formula

we firstly let c be the normalizing factor to convert to a probability space:

We see that exponential decay is a scalar multiple of the exponential distribution (i.e. the individual lifetime of each object is exponentially distributed), which has a well-known expected value. We can compute it here using integration by parts.

Decay by two or more processes

A quantity may decay via two or more different processes simultaneously. In general, these processes (often called "decay modes", "decay channels", "decay routes" etc.) have different probabilities of occurring, and thus occur at different rates with different half-lives, in parallel. The total decay rate of the quantity N is given by the sum of the decay routes; thus, in the case of two processes:

The solution to this equation is given in the previous section, where the sum of

is treated as a new total decay constant

In words: the mean life for combined decay channels is the harmonic mean of the mean lives associated with the individual processes divided by the total number of processes.

Since half-lives differ from mean life

by a constant factor, the same equation holds in terms of the two corresponding half-lives:

In terms of separate decay constants, the total half-life T1 / 2 can be shown to be

For a decay by three simultaneous exponential processes the total half-life can be computed, as above, as the harmonic mean of separate mean lives:

Exponential decay occurs in a wide variety of situations. Most of these fall into the domain of the natural sciences. Any application of mathematics to the social sciences or humanities is risky and uncertain, because of the extraordinary complexity of human behavior. However, a few roughly exponential phenomena have been identified there as well.

Many decay processes that are often treated as exponential, are really only exponential so long as the sample is large and the law of large numbers holds. For small samples, a more general analysis is necessary, accounting for a Poisson process.