Twentieth-century experiments demonstrated that electric charge is quantized; that is, it comes in multiples of individual small units called the elementary charge, e, approximately equal to 1.602×10−19 coulombs (except for particles called quarks, which have charges that are multiples of ⅓e). The proton has a charge of e, and the electron has a charge of −e. The study of charged particles, and how their interactions are mediated by photons, is quantum electrodynamics.

Charge is the fundamental property of forms of matter that exhibit electrostatic attraction or repulsion in the presence of other matter. Electric charge is a characteristic property of many subatomic particles. The charges of free-standing particles are integer multiples of the elementary charge e; we say that electric charge is quantized. Michael Faraday, in his electrolysis experiments, was the first to note the discrete nature of electric charge. Robert Millikan's oil-drop experiment demonstrated this fact directly, and measured the elementary charge.

By convention, the charge of an electron is −1, while that of a proton is +1. Charged particles whose charges have the same sign repel one another, and particles whose charges have different signs attract. Coulomb's law quantifies the electrostatic force between two particles by asserting that the force is proportional to the product of their charges, and inversely proportional to the square of the distance between them.

The charge of an antiparticle equals that of the corresponding particle, but with opposite sign. Quarks have fractional charges of either −1⁄3 or +2⁄3, but free-standing quarks have never been observed (the theoretical reason for this fact is asymptotic freedom).

The electric charge of a macroscopic object is the sum of the electric charges of the particles that make it up. This charge is often small, because matter is made of atoms, and atoms typically have equal numbers of protons and electrons, in which case their charges cancel out, yielding a net charge of zero, thus making the atom neutral.

There are times when macroscopic objects contain ions distributed throughout the material, rigidly bound in place, giving an overall net positive or negative charge to the object. Also, macroscopic objects made of conductive elements, can more or less easily (depending on the element) take on or give off electrons, and then maintain a net negative or positive charge indefinitely. When the net electric charge of an object is non-zero and motionless, the phenomenon is known as static electricity. This can easily be produced by rubbing two dissimilar materials together, such as rubbing amber with fur or glass with silk. In this way non-conductive materials can be charged to a significant degree, either positively or negatively. Of course, charge taken from one material is simply moved to the other material, leaving an opposite charge of the same magnitude behind. The law of conservation of charge always applies, giving the object from which a negative charge has been taken a positive charge of the same magnitude, and vice-versa.

Even when an object's net charge is zero, charge can be distributed non-uniformly in the object (e.g., due to an external electromagnetic field, or bound polar molecules). In such cases the object is said to be polarized. The charge due to polarization is known as bound charge, while charge on an object produced by electrons gained or lost from outside the object is called free charge. The motion of electrons in conductive metals in a specific direction is known as electric current.

After finding the quantized character of charge, in 1891 George Stoney proposed the unit 'electron' for this fundamental unit of electrical charge. This was before the discovery of the particle by J.J. Thomson in 1897. The unit is today treated as nameless, referred to as "elementary charge", "fundamental unit of charge", or simply as "e". A measure of charge should be a multiple of the elementary charge e, even if at large scales, charge seems to behave as a real quantity. In some contexts it is meaningful to speak of fractions of a charge; for example in the charging of a capacitor, or in the fractional quantum Hall effect. 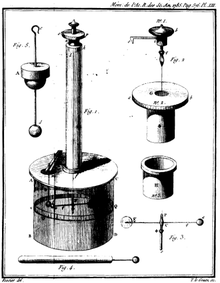 As reported by the ancient Greek philosopher Thales of Miletus around 600 BC, charge (or electricity) could be accumulated by rubbing fur on various substances, such as amber. The Greeks noted that the charged amber buttons could attract light objects such as hair. They also noted that if they rubbed the amber for long enough, they could even get an electric spark to jump. This property derives from the triboelectric effect.

In 1600, the English scientist William Gilbert returned to the subject in De Magnete, and coined the New Latin word electricus from ηλεκτρον (elektron), the Greek word for "amber", which soon gave rise to the English words "electric" and "electricity." He was followed in 1660 by Otto von Guericke, who invented what was probably the first electrostatic generator. Other European pioneers were Robert Boyle, who in 1675 stated that electric attraction and repulsion can act across a vacuum; Stephen Gray, who in 1729 classified materials as conductors and insulators; and C. F. du Fay, who proposed in 1733[1] that electricity comes in two varieties that cancel each other, and expressed this in terms of a two-fluid theory. When glass was rubbed with silk, du Fay said that the glass was charged with vitreous electricity, and, when amber was rubbed with fur, the amber was said to be charged with resinous electricity. In 1839, Michael Faraday showed that the apparent division between static electricity, current electricity, and bioelectricity was incorrect, and all were a consequence of the behavior of a single kind of electricity appearing in opposite polarities. It is arbitrary which polarity is called positive and which is called negative. Positive charge can be defined as the charge left on a glass rod after being rubbed with silk.[2]

One of the foremost experts on electricity in the 18th century was Benjamin Franklin, who argued in favour of a one-fluid theory of electricity. Franklin imagined electricity as being a type of invisible fluid present in all matter; for example, he believed that it was the glass in a Leyden jar that held the accumulated charge. He posited that rubbing insulating surfaces together caused this fluid to change location, and that a flow of this fluid constitutes an electric current. He also posited that when matter contained too little of the fluid it was "negatively" charged, and when it had an excess it was "positively" charged. For a reason that was not recorded, he identified the term "positive" with vitreous electricity and "negative" with resinous electricity. William Watson arrived at the same explanation at about the same time.

These phenomena of attraction and repulsion are called electrical phenomena, and the bodies that exhibit them are said to be 'electrified', or to be 'charged with electricity'.

Bodies may be electrified in many other ways, as well as by friction.

No force, either of attraction or of repulsion, can be observed between an electrified body and a body not electrified.[3]

We now know that the Franklin/Watson model was fundamentally correct. There is only one kind of electrical charge, and only one variable is required to keep track of the amount of charge.[4] On the other hand, just knowing the charge is not a complete description of the situation. Matter is composed of several kinds of electrically charged particles, and these particles have many properties, not just charge.

The most common charge carriers are the positively charged proton and the negatively charged electron. The movement of any of these charged particles constitutes an electric current. In many situations, it suffices to speak of the conventional current without regard to whether it is carried by positive charges moving in the direction of the conventional current and/or by negative charges moving in the opposite direction. This macroscopic viewpoint is an approximation that simplifies electromagnetic concepts and calculations.

Beware that, in the common and important case of metallic wires, the direction of the conventional current is opposite to the drift velocity of the actual charge carriers, i.e., the electrons. This is a source of confusion for beginners.

Aside from the properties described in articles about electromagnetism, charge is a relativistic invariant. This means that any particle that has charge Q, no matter how fast it goes, always has charge Q. This property has been experimentally verified by showing that the charge of one helium nucleus (two protons and two neutrons bound together in a nucleus and moving around at high speeds) is the same as two deuterium nuclei (one proton and one neutron bound together, but moving much more slowly than they would if they were in a helium nucleus).

The total electric charge of an isolated system remains constant regardless of changes within the system itself. This law is inherent to all processes known to physics and can be derived in a local form from gauge invariance of the wave function. The conservation of charge results in the charge-current continuity equation. More generally, the net change in charge density ρ within a volume of integration V is equal to the area integral over the current density J through the closed surface S = ∂V, which is in turn equal to the net current I:

Thus, the conservation of electric charge, as expressed by the continuity equation, gives the result:

The charge transferred between times ti and tf is obtained by integrating both sides:

where I is the net outward current through a closed surface and Q is the electric charge contained within the volume defined by the surface.