Electric current is a flow of electric charge through a medium.[1] This charge is typically carried by moving electrons in a conductor such as wire. It can also be carried by ions in an electrolyte, or by both ions and electrons in a plasma.[2]

The SI unit for measuring the rate of flow of electric charge is the ampere, which is charge flowing through some surface at the rate of one coulomb per second. Electric current is measured using an ammeter.[1]

The conventional symbol for current is I, which originates from the French phrase intensité de courant, or in English current intensity.[3][4] This phrase is frequently used when discussing the value of an electric current, especially in older texts; modern practice often shortens this to simply current but current intensity is still used in many recent textbooks. The I symbol was used by André-Marie Ampère, after whom the unit of electric current is named, in formulating the eponymous Ampère's force law which he discovered in 1820.[5] The notation travelled from France to England, where it became standard, although at least one journal did not change from using C to I until 1896.[6]

A solid conductive metal contains mobile, or free electrons, originating in the conduction electrons. These electrons are bound to the metal lattice but no longer to any individual atom. Even with no external electric field applied, these electrons move about randomly due to thermal energy but, on average, there is zero net current within the metal. Given a surface through which a metal wire passes, the number of electrons moving from one side to the other in any period of time is on average equal to the number passing in the opposite direction. As George Gamow put in his science-popularizing book, One, Two, Three...Infinity (1947), "The metallic substances differ from all other materials by the fact that the outer shells of their atoms are bound rather loosely, and often let one of their electrons go free. Thus the interior of a metal is filled up with a large number of unattached electrons that travel aimlessly around like a crowd of displaced persons. When a metal wire is subjected to electric force applied on its opposite ends, these free electrons rush in the direction of the force, thus forming what we call an electric current."

When a metal wire is connected across the two terminals of a DC voltage source such as a battery, the source places an electric field across the conductor. The moment contact is made, the free electrons of the conductor are forced to drift toward the positive terminal under the influence of this field. The free electrons are therefore the charge carrier in a typical solid conductor. For an electric current of 1 ampere, 1 coulomb of electric charge (which consists of about 6.242 × 1018 elementary charges) drifts every second through any plane through which the conductor passes.

For a steady flow of charge through a surface, the current I (in amperes) can be calculated with the following equation:

where Q is the electric charge transferred through the surface over some time t. If Q and t are measured in coulombs and seconds respectively, I is in amperes.

More generally, electric current can be represented as the rate at which charge flows through a given surface as:

Electric currents in electrolytes are flows of electrically charged particles (ions). For example, if an electric field is placed across a solution of Na+ and Cl− (and conditions are right) the sodium ions move towards the negative electrode (cathode), while the chloride ions move towards the positive electrode (anode). Reactions take place at both electrode surfaces, absorbing each ion.

Water-ice and certain solid electrolytes called proton conductors contain positive hydrogen ions or "protons" which are mobile. In these materials, electric currents are composed of moving protons, as opposed to the moving electrons found in metals.

In certain electrolyte mixtures, brightly-colored ions form the moving electric charges. The slow migration of these ions means that the current is visible.

In air and other ordinary gases below the breakdown field, the dominant source of electrical conduction is via a relatively small number of mobile ions produced by radioactive gases, ultraviolet light, or cosmic rays. Since the electrical conductivity is low, gases are dielectrics or insulators. However, once the applied electric field approaches the breakdown value, free electrons become sufficiently accelerated by the electric field to create additional free electrons by colliding, and ionizing, neutral gas atoms or molecules in a process called avalanche breakdown. The breakdown process forms a plasma that contains a significant number of mobile electrons and positive ions, causing it to behave as an electrical conductor. In the process, it forms a light emitting conductive path, such as a spark, arc or lightning.

Plasma is the state of matter where some of the electrons in a gas are stripped or "ionized" from their molecules or atoms. A plasma can be formed by high temperature, or by application of a high electric or alternating magnetic field as noted above. Due to their lower mass, the electrons in a plasma accelerate more quickly in response to an electric field than the heavier positive ions, and hence carry the bulk of the current.

Since a "perfect vacuum" contains no charged particles, it normally behaves as perfect insulator. However, metal electrode surfaces can cause a region of the vacuum to become conductive by injecting free electrons or ions through either field electron emission or thermionic emission. Thermionic emission occurs when the thermal energy exceeds the metal's work function, while field electron emission occurs when the electric field at the surface of the metal is high enough to cause tunneling, which results in the ejection of free electrons from the metal into the vacuum. Externally heated electrodes are often used to generate an electron cloud as in the filament or indirectly heated cathode of vacuum tubes. Cold electrodes can also spontaneously produce electron clouds via thermionic emission when small incandescent regions (called cathode spots or anode spots) are formed. These are incandescent regions of the electrode surface that are created by a localized high current flow. These regions may be initiated by field electron emission, but are then sustained by localized thermionic emission once a vacuum arc forms. These small electron-emitting regions can form quite rapidly, even explosively, on a metal surface subjected to a high electrical field. Vacuum tubes and sprytrons are some of the electronic switching and amplifying devices based on vacuum conductivity.

where I is current in the conductor, J is the current density, and A is the cross-sectional area. The dot product of the two vector quantities (A and J) is a scalar that represents the electric current.

Current density (current per unit area) J in a material is proportional to the conductivity σ and electric field E in the medium:

Instead of conductivity, reciprocal quantity called resistivity ρ, can be used:

Conduction in semiconductor devices may occur by a combination of electric field (drift) and diffusion, which is proportional to diffusion constant D and charge density αq. The current density is then:

In linear anisotropic materials, σ, ρ and D are tensors.

In linear materials such as metals, and under low frequencies, the current density across the conductor surface is uniform. In such conditions, Ohm's law states that the current is directly proportional to the potential difference between two ends (across) of that metal (ideal) resistor (or other ohmic device):

where I is the current, measured in amperes; V is the potential difference, measured in volts; and R is the resistance, measured in ohms. For alternating currents, especially at higher frequencies, skin effect causes the current to spread unevenly across the conductor cross-section, with higher density near the surface, thus increasing the apparent resistance.

The mobile charged particles within a conductor move constantly in random directions, like the particles of a gas. In order for there to be a net flow of charge, the particles must also move together with an average drift rate. Electrons are the charge carriers in metals and they follow an erratic path, bouncing from atom to atom, but generally drifting in the opposite direction of the electric field. The speed at which they drift can be calculated from the equation:

I is the electric current
n is number of charged particles per unit volume (or charge carrier density)
A is the cross-sectional area of the conductor
v is the drift velocity, and
Q is the charge on each particle.

Electric currents in solids typically flow very slowly. For example, in a copper wire of cross-section 0.5 mm2, carrying a current of 5 A, the drift velocity of the electrons is on the order of a millimetre per second. To take a different example, in the near-vacuum inside a cathode ray tube, the electrons travel in near-straight lines at about a tenth of the speed of light.

Any accelerating electric charge, and therefore any changing electric current, gives rise to an electromagnetic wave that propagates at very high speed outside the surface of the conductor. This speed is usually a significant fraction of the speed of light, as can be deduced from Maxwell's Equations, and is therefore many times faster than the drift velocity of the electrons. For example, in AC power lines, the waves of electromagnetic energy propagate through the space between the wires, moving from a source to a distant load, even though the electrons in the wires only move back and forth over a tiny distance.

The magnitudes (but, not the natures) of these three velocities can be illustrated by an analogy with the three similar velocities associated with gases. 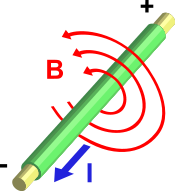 According to Ampère's law, an electric current produces a magnetic field.

Electric current produces a magnetic field. The magnetic field can be visualized as a pattern of circular field lines surrounding the wire.

Electric current can be directly measured with a galvanometer, but this method involves breaking the electrical circuit, which is sometimes inconvenient. Current can also be measured without breaking the circuit by detecting the magnetic field associated with the current. Devices used for this include Hall effect sensors, current clamps, current transformers, and Rogowski coils.

The theory of Special Relativity allows one to transform the magnetic field into a static electric field for an observer moving at the same speed as the charge in the diagram. The amount of current is particular to a reference frame. 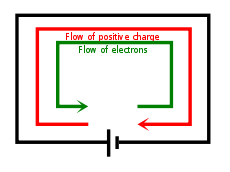 The electrons, the charge carriers in an electrical circuit, flow in the opposite direction of the conventional electric current.

The symbol for a battery in a circuit diagram.

In metals, which make up the wires and other conductors in most electrical circuits, the positive charges are immobile, and only the negatively charged electrons flow. Because the electron carries negative charge, the electron motion in a metal conductor is in the direction opposite to that of conventional (or electric) current.

Natural examples include lightning and the solar wind, the source of the polar auroras (the aurora borealis and aurora australis). The artificial form of electric current is the flow of conduction electrons in metal wires, such as the overhead power lines that deliver electrical energy across long distances and the smaller wires within electrical and electronic equipment. In electronics, other forms of electric current include the flow of electrons through resistors or through the vacuum in a vacuum tube, the flow of ions inside a battery or a neuron, and the flow of holes within a semiconductor.

Current can be measured using an ammeter.

At the circuit level, there are various techniques that can be used to measure current: