Direct current (DC) is the unidirectional flow of electric charge. Direct current is produced by such sources as batteries, thermocouples, solar cells, and commutator-type electric machines of the dynamo type. Direct current may flow in a conductor such as a wire, but can also flow through semiconductors, insulators, or even through a vacuum as in electron or ion beams. The electric charge flows in a constant direction, distinguishing it from alternating current (AC). A term formerly used for direct current was galvanic current.[1] 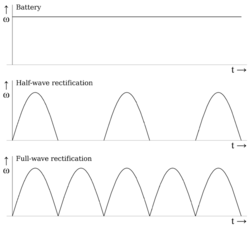 Although DC stands for "direct current", DC often refers to "constant polarity". Under this definition, DC voltages can vary in time, as seen in the raw output of a rectifier or the fluctuating voice signal on a telephone line.

Some forms of DC (such as that produced by a voltage regulator) have almost no variations in voltage, but may still have variations in output power and current.

Direct-current installations usually have different types of sockets, switches, and fixtures, mostly due to the low voltages used, from those suitable for alternating current. It is usually important with a direct-current appliance not to reverse polarity unless the device has a diode bridge to correct for this (most battery-powered devices do not).

This symbol is found on many electronic devices that either require or produce direct current.

Telephone exchange communication equipment, such as DSLAM, uses standard -48V DC power supply. The negative polarity is achieved by grounding the positive terminal of power supply system and the battery bank. This is done to prevent electrolysis depositions.