In electrical engineering, ground or earth may be the reference point in an electrical circuit from which other voltages are measured, or a common return path for electric current, or a direct physical connection to the Earth. 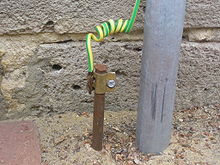 A typical earthing electrode (left) at a home in Australia. Fig. 1. Note the green and yellow marked earth wire.

Electrical circuits may be connected to ground (earth) for several reasons. In mains powered equipment, exposed metal parts are connected to ground to prevent contact with a dangerous voltage if electrical insulation fails. Connections to ground limit the build-up of static electricity when handling flammable products or when repairing electronic devices. In some telegraph and power transmission circuits, the earth itself can be used as one conductor of the circuit, saving the cost of installing a separate return conductor.

For measurement purposes, the Earth serves as a (reasonably) constant potential reference against which other potentials can be measured. An electrical ground system should have an appropriate current-carrying capability in order to serve as an adequate zero-voltage reference level. In electronic circuit theory, a "ground" is usually idealized as an infinite source or sink for charge, which can absorb an unlimited amount of current without changing its potential. Where a real ground connection has a significant resistance, the approximation of zero potential is no longer valid. Stray voltages or earth potential rise effects will occur, which may create noise in signals or if large enough will produce an electric shock hazard.

The use of the term ground (or earth) is so common in electrical and electronics applications that circuits in portable electronic devices such as cell phones and media players as well as circuits in vehicles such as ships, aircraft, and spacecraft may be spoken of as having a "ground" connection without any actual connection to the Earth. This is usually a large conductor attached to one side of the power supply (such as the "ground plane" on a printed circuit board) which serves as the common return path for current from many different components in the circuit.

The terms ground and grounding are used in US electrical practice. In the UK the equivalent terms are earth and earthing.

Long-distance electromagnetic telegraph systems from 1820 onwards used two or more wires to carry the signal and return currents. It was then discovered, probably by the German scientist Carl August Steinheil in 1836-1837 [1], that the ground could be used as the return path to complete the circuit, making the return wire unnecessary. However, there were problems with this system, exemplified by the transcontinental telegraph line constructed in 1861 by the Western Union Company between Saint Joseph, Missouri, and Sacramento, California. During dry weather, the ground connection often developed a high resistance, requiring water to be poured on the ground rod to enable the telegraph to work or phones to ring.

Later, when telephony began to replace telegraphy, it was found that the currents in the earth induced by power systems, electrical railways, other telephone and telegraph circuits, and natural sources including lightning caused unacceptable interference to the audio signals, and the two-wire system was reintroduced.

An electrical connection to earth can be used as a reference potential for radio frequency signals for certain kinds of antennas. The part directly in contact with the earth - the "earth electrode" - can be as simple as a metal rod or stake driven into the earth , or a connection to buried metal water piping (though this carries the risk of the water pipe being later replaced with plastic). Because high frequency signals can flow to earth through capacitance, capacitance to ground is an important factor in effectiveness of signal grounds. Because of this a complex system of buried rods and wires can be effective. An ideal signal ground maintains zero voltage regardless of how much electric current flows into ground or out of ground. The resistance at the signal frequency of the electrode-to-earth connection determines its quality, and that quality is improved by increasing the surface area of the electrode in contact with the earth, increasing the depth to which it is driven, using several connected ground rods, increasing the moisture of the soil, improving the conductive mineral content of the soil, and increasing the land area covered by the ground system.

Some types of transmitting antenna systems in the VLF, LF, MF and lower SW range depend on a good ground to operate efficiently. For example, a vertical monopole antenna requires a ground plane that often consists of an interconnected network of wires running radially away from the base of the antenna for a distance about equal to the height of the antenna. Sometimes such a ground plane is supported above ground to reduce losses.

Equipment bonding conductors provide a low impedance path between non-current-carrying metallic parts of equipment and one of the conductors of that electrical system's source, so that if a part becomes energized for any reason, such as a frayed or damaged conductor, a short circuit will occur and operate a circuit breaker or fuse to disconnect the faulted circuit. Note that the earth itself has no role in this fault-clearing process[2] since current must return to its source, not the earth as is sometimes believed[citation needed] (see Kirchhoff's circuit laws). By bonding (interconnecting) all exposed non-current carrying metal objects together, they should remain near the same potential thus reducing the chance of a shock. This is especially important in bathrooms where one may be in contact with several different metallic systems such as supply and drain pipes and appliance frames. The equipment bonding conductor is usually also used as the equipment earthing conductor (see above).

A grounding electrode conductor connects one leg of an electrical system to one or more earth electrodes. This is called "system grounding" and most systems are required to be grounded. The U.S. NEC and the UK's BS 7671 list systems that are required to be grounded. The grounding electrode conductor is connected to the leg of the electrical system that is the "neutral wire". The grounding electrode conductor is also usually bonded to pipework and structural steel in larger structures. According to the NEC, the purpose of earthing an electrical system is to limit the voltage to earth imposed by lightning events and contact with higher voltage lines, and also to stabilize the voltage to earth during normal operation. In the past, water supply pipes were often used as ground electrodes, but this was banned where plastic pipes are popular. This type of ground applies to radio antennas and to lightning protection systems.

Permanently installed electrical equipment usually also has permanently connected grounding conductors. Portable electrical devices with metal cases may have them connected to earth ground by a pin in the interconnecting plug (see Domestic AC power plugs and sockets). The size of power ground conductors is usually regulated by local or national wiring regulations.

In Single Wire Earth Return (SWER) AC electrical distribution systems, costs are saved by using just a single high voltage conductor for the power grid, while routing the AC return current through the earth. This system is mostly used in rural areas where large earth currents will not otherwise cause hazards.

Some HVDC power transmission systems use the ground as second conductor. This is especially common in schemes with submarine cables, as sea water is a good conductor. Buried grounding electrodes are used to make the connection to the earth. The site of these electrodes must be chosen very carefully in order to prevent electrochemical corrosion on underground structures.

A particular concern in design of electrical substations is earth potential rise. When very large fault currents are injected into the earth, the area around the point of injection may rise to a high potential with respect to distant points. This is due to the limited finite conductivity of the layers of soil in the earth. The gradient of the voltage (changing voltage within a distance) may be so high that two points on the ground may be at significantly different potentials, creating a hazard to anyone standing on the ground in the area. Pipes, rails, or communication wires entering a substation may see different ground potentials inside and outside the substation, creating a dangerous touch voltage.

Signal grounds serve as return paths for signals and power (at extra low voltages, i.e., less than about 50 V) within equipment, and on the signal interconnections between equipment. Many electronic designs feature a single return that acts as a reference for all signals. Power and signal grounds often get connected together, usually through the metal case of the equipment.

Voltage is a differential quantity. To measure the voltage of a single point, a reference point must be selected to measure against. This common reference point is called "ground" and considered to have zero voltage. This signal ground may not actually be connected to a power ground. A system where the system ground is not actually connected to another circuit or to earth (though there may still be AC coupling) is often referred to as a floating ground.

In television stations, recording studios, and other installations where sound quality is critical, a special signal ground known as a "technical ground" (or "technical earth") is often installed, to prevent ground loops. This is basically the same thing as an AC power ground, but no appliance ground wires are allowed any connection to it, as they may carry electrical interference. In most cases, the studio's metal equipment racks are all joined together with heavy copper cables (or flattened copper tubing or busbars) and similar connections are made to the technical ground. Great care is taken that no AC-grounded appliances are placed on the racks, as a single AC ground connection to the technical ground will destroy its effectiveness. For particularly demanding applications, the main technical ground may consist of a heavy copper pipe, if necessary fitted by drilling through several concrete floors, such that all technical grounds may be connected by the shortest possible path to a grounding rod in the basement. 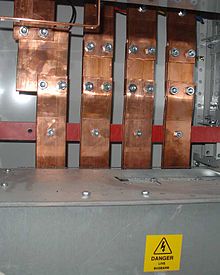 Busbars are used for ground conductors in high-current circuits.

In electricity supply systems, an earthing (grounding) system defines the electrical potential of the conductors relative to that of the Earth's conductive surface. The choice of earthing system has implications for the safety and electromagnetic compatibility of the power supply. Note that regulations for earthing systems vary considerably between different countries.

A ground (earth) mat or grounding (earthing) mat is a flat, flexible pad used for working on electrostatic sensitive devices. It is generally made of a conductive plastic or metal mesh covered substrate which is electrically attached to ground (earth). This helps discharge any static charge which a worker has built up, as well as any static charge on tools or exposed components laid on the mat. It is used most commonly in computer repair. Ground (earth) mats are also found on fuel trucks and tankers, which are otherwise insulated from ground (earth) as they make physical contact only with their tires and the air; obviously static discharge is undesirable during fuel-transfer operations. Similarly, in aircraft refueling, a ground (earth) cable connects the tanker (truck or airplane) to the fuel-seeking craft to eliminate charge differences before fuel is transferred.

In an electrical substation a ground (earth) mat is a mesh of conductive material installed at places where a person would stand to operate a switch or other apparatus; it is bonded to the local supporting metal structure and to the handle of the switchgear, so that the operator will not be exposed to a high differential voltage due to a fault in the substation.