Eddy current
This article is about the electrical phenomenon. For the Ted McKeever comic, see Eddy Current (comics).

Eddy currents (also called Foucault currents[1]) are currents induced in conductors when a conductor is exposed to a changing magnetic field; due to relative motion of the field source and conductor or due to variations of the field with time. This can cause a circulating flow of electrons, or current, within the body of the conductor. These circulating eddies of current have inductance and thus induce magnetic fields. These fields can cause repulsive, attractive,[2] propulsion and drag effects. The stronger the applied magnetic field, or the greater the electrical conductivity of the conductor, or the faster the field changes, then the greater the currents that are developed and the greater the fields produced.

The term eddy current comes from analogous currents seen in water when dragging an oar breadthwise: localised areas of turbulence known as eddies give rise to persistent vortices. Somewhat analogously, eddy currents can take time to build up and can persist for very short times in conductors due to their inductance.

Eddy currents, like all electric currents, generate heat as well as electromagnetic forces. The heat can be harnessed for induction heating. The electromagnetic forces can be used for levitation, creating movement, or to give a strong braking effect. Eddy currents can also have undesirable effects, for instance power loss in transformers. In this application, they are minimised with thin plates, by lamination of conductors or other details of conductor shape.

Self-induced eddy currents are responsible for the skin effect in conductors.[3] The latter can be used for non-destructive testing of materials for geometry features, like micro-cracks.[4] A similar effect is the proximity effect, which is caused by externally-induced eddy currents.[5]

The first person to observe current eddies was François Arago (1786–1853), the 25th Prime Minister of France, who was also a mathematician, physicist and astronomer. In 1824 he observed what has been called rotatory magnetism, and the fact that most conductive bodies could be magnetized; these discoveries were completed and explained by Michael Faraday (1791–1867).

In 1834, Heinrich Lenz stated Lenz's law, which says that the direction of induced current flow in an object will be such that its magnetic field will oppose the magnetic field that caused the current flow. Eddy currents develop secondary flux that cancels a part of the external flux.

French physicist Léon Foucault (1819–1868) is credited with having discovered Eddy currents. In September, 1855, he discovered that the force required for the rotation of a copper disc becomes greater when it is made to rotate with its rim between the poles of a magnet, the disc at the same time becoming heated by the eddy current induced in the metal. The first use of eddy current for Non-destructive testing occurred in 1879 when D. E. Hughes used the principles to conduct metallurgical sorting tests.[6] 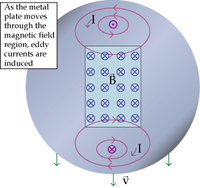 As the circular plate moves down through a small region of constant magnetic field directed into the page, eddy currents are induced in the plate. The direction of those currents is given by Lenz's law, i.e. so that the plate's movement is hindered.

When a conductor moves relative to the field generated by a source, electromotive forces (EMFs) can be generated around loops within the conductor. These EMFs acting on the resistivity of the material generate a current around the loop, in accordance with Faraday's law of induction. These currents dissipate energy, and create a magnetic field that tends to oppose changes in the current- they have inductance.

The swirling current set up in the conductor is due to electrons experiencing a Lorentz force that is perpendicular to their motion. Hence, they veer to their right, or left, depending on the direction of the applied field and whether the strength of the field is increasing or declining. The resistivity of the conductor acts to damp the amplitude of the eddy currents, as well as straighten their paths. Lenz's law encapsulates the fact that the current swirls in such a way as to create an induced magnetic field that opposes the phenomenon that created it. In the case of a varying applied field, the induced field will always be in the opposite direction to that applied. The same will be true when a varying external field is increasing in strength. However, when a varying field is falling in strength, the induced field will be in the same direction as that originally applied, in order to oppose the decline.

An object or part of an object experiences steady field intensity and direction where there is still relative motion of the field and the object (for example in the center of the field in the diagram), or unsteady fields where the currents cannot circulate due to the geometry of the conductor. In these situations charges collect on or within the object and these charges then produce static electric potentials that oppose any further current. Currents may be initially associated with the creation of static potentials, but these may be transitory and small.

Eddy currents generate resistive losses that transform some forms of energy, such as kinetic energy, into heat. This Joule heating reduces efficiency of iron-core transformers and electric motors and other devices that use changing magnetic fields. Eddy currents are minimized in these devices by selecting magnetic core materials that have low electrical conductivity (e.g., ferrites) or by using thin sheets of magnetic material, known as laminations. Electrons cannot cross the insulating gap between the laminations and so are unable to circulate on wide arcs. Charges gather at the lamination boundaries, in a process analogous to the Hall effect, producing electric fields that oppose any further accumulation of charge and hence suppressing the eddy currents. The shorter the distance between adjacent laminations (i.e., the greater the number of laminations per unit area, perpendicular to the applied field), the greater the suppression of eddy currents.

The conversion of input energy to heat is not always undesirable, however, as there are some practical applications. One is in the brakes of some trains known as eddy current brakes. During braking, the metal wheels are exposed to a magnetic field from an electromagnet, generating eddy currents in the wheels. The eddy currents meet resistance as charges flow through the metal, thus dissipating energy as heat, and this acts to slow the wheels down. The faster the wheels are spinning, the stronger the effect, meaning that as the train slows the braking force is reduced, producing a smooth stopping motion. Induction heating makes use of eddy currents to provide heating of metal objects.

Under certain assumptions (uniform material, uniform magnetic field, no skin effect, etc.) the power lost due to eddy currents can be calculated from the following equations:[7]

It should be borne in mind that these equations are valid only under the so-called "quasi-static" conditions, where the frequency of magnetisation does not result in the skin effect, i.e. the electromagnetic wave fully penetrates the material.

Therefore, the following things usually increase the size and effects of eddy currents:

Some things reduce the effects:

In very fast changing fields due to skin effect the equations shown above are not valid because the magnetic field does not penetrate the material uniformly. However, in any case increased frequency of the same value of field will always increase eddy currents, even with non-uniform field penetration.

The penetration depth can be calculated from the following equation:

In a fast varying magnetic field the induced currents, in good conductors, particularly copper and aluminium, frequently exhibit diamagnetic-like repulsion effects on the magnetic field, and hence on the magnet and can create repulsive effects and even stable levitation, albeit with reasonably high power dissipation due to the high currents this entails.

They can thus be used to induce a magnetic field in aluminum cans, which allows them to be separated easily from other recyclables (see also eddy current separator). With a very strong handheld magnet, such as those made from neodymium, one can easily observe a very similar effect by rapidly sweeping the magnet over a coin with only a small separation. Depending on the strength of the magnet, identity of the coin, and separation between the magnet and coin, one may induce the coin to be pushed slightly ahead of the magnet - even if the coin contains no magnetic elements, such as the US penny. Another example involves dropping a strong magnet down a tube of copper[10] -- the magnet falls at a dramatically slow pace.

In some geometries the overall force of eddy currents can be attractive, for example, where the flux lines are past 90 degrees to a surface, the induced currents in a nearby conductor cause a force that pushes a conductor towards an electromagnet.[2]

In coin operated vending machines, eddy currents are used to detect counterfeit coins, or slugs. The coin rolls past a stationary magnet, and eddy currents slow its speed. The strength of the eddy currents, and thus the retardation, depends on the conductivity of the coin's metal. Slugs are slowed to a different degree than genuine coins, and this is used to send them into the rejection slot.

Eddy currents are used in certain types of proximity sensors to observe the vibration and position of rotating shafts within their bearings. This technology was originally pioneered in the 1930s by researchers at General Electric using vacuum tube circuitry. In the late 1950s, solid-state versions were developed by Donald E. Bently at Bently Nevada Corporation. These sensors are extremely sensitive to very small displacements making them well suited to observe the minute vibrations (on the order of several thousandths of an inch) in modern turbomachinery. A typical proximity sensor used for vibration monitoring has a scale factor of 200 mV/mil. Widespread use of such sensors in turbomachinery has led to development of industry standards that prescribe their use and application. Examples of such standards are American Petroleum Institute (API) Standard 670 and ISO 7919.

Eddy currents are used for braking at the end of some roller coasters. This mechanism has no mechanical wear and produces a very precise braking force. Typically, heavy copper plates extending from the car are moved between pairs of very strong permanent magnets. Electrical resistance within the plates causes a dragging effect analogous to friction, which dissipates the kinetic energy of the car. The same technique is used in electromagnetic brakes in railroad cars and to quickly stop the blades in power tools such as circular saws.

Eddy currents are the root cause of the skin effect in conductors carrying AC current.

Similarly, in magnetic materials of finite conductivity eddy currents cause the confinement of the majority of the magnetic fields to only a couple skin depths of the surface of the material. This effect limits the flux linkage in inductors and transformers having magnetic cores.

The derivation of a useful equation for modeling the effect of eddy currents in a material starts with the differential, magnetostatic form of Ampère's Law,[14] providing an expression for the magnetic field H surrounding a current density J,

The curl is taken on both sides of the equation,

From Gauss's law for magnetism,

, which drops a term from the expression and gives

, which relates current density J to electric field Ε in terms of a material's conductivity σ, and assuming isotropic homogeneous conductivity, the equation can be written as

The differential form of Faraday's law,

, provides an equivalence for the change in magnetic flux B in place of the curl of the electric field, so that the equation can be simplified to

, where M is the magnetization of a material, μ0 is the vacuum permeability, and the diffusion equation finally appears as