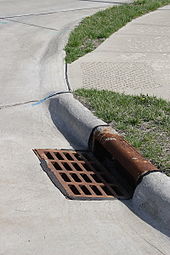 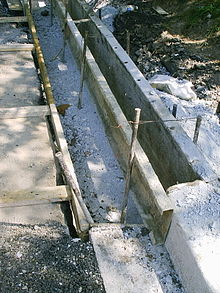 Metal forms before the concrete is poured and finished by hand. 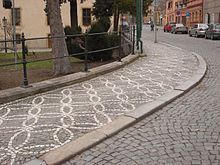 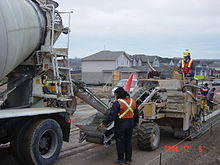 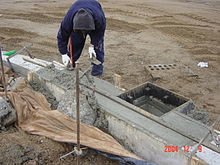 A curb, or kerb (see spelling differences), is the edge where a raised pavement/sidewalk/footpath, road median, or road shoulder meets an unraised street or other roadway.

Curbs may fulfill any or several of a number of functions. They separate the road from the roadside, discouraging drivers from parking or driving on sidewalks and lawns. They also provide structural support to the pavement edge. Curbs can be used to channel runoff water from rain, or melted snow and ice into storm drains. There is also an aesthetic aspect, in that curbs look formal and "finished".

Since curbs add to the cost of a road, they are generally limited to urban and suburban areas, and are rarely found in rural areas except where certain drainage conditions (such as mountains or culverts) make them necessary. Curbs are not universally used, however, even in urban settings (see living street).

In low-speed environments, curbs are effective at channelizing motor vehicle traffic. On higher speed roads, curbs should not be used because they can destabilize vehicles that strike them. A high-speed vehicle that hits a curb may actually turn towards the sidewalk, rather than be directed away from it. A vehicle that strikes a curb can be tripped into a rollover crash or vaulted into the air. The vehicle could be vaulted over a traffic barrier into the object the barrier is intended to shield. This is a reason why they are rarely used on rural or high speed roads. Where curb is used with a traffic barrier, the barrier should be close to or well behind the curb to reduce the chances of a vehicle going over the barrier.[1]

Depending on the area and the distance between the travel lane and the edge of pavement, the white edge line that normally indicates the outside (shoulder) edge of the road may or may not be present where there is a curb. Reflectorized road marking material can also be applied to the curb itself to make it more conspicuous.

There are a number of types of curb, categorized by shape, material, height, and by whether the curb is combined with a gutter. Most curb is constructed separately from the pavement, and the gutter is formed by the joint between the gutter and the curb. Combined curb and gutter (also called curb and channel) has a concrete curb and gutter cast together in one piece. Integral curb is curb constructed integrally as a part of a concrete pavement.

Curb often have a vertical or nearly-vertical face, also called barrier, nonmountable or insurmountable curb. Vertical faced curb is used to discourage motor vehicle drivers from leaving the roadway. The square (90°-edge) type is still almost always used in towns and cities, as it is a straight step down and thus less likely to be tripped-over by pedestrians.[citation needed] Slope faced curb allows vehicles to cross it at low speed. Slope-faced curb is most often used on major suburban thoroughfares. At driveways, crosswalks and other pedestrian crossings, dropped curb cuts are used to allow wheeled vehicles such as automobiles, wheelchairs, prams and strollers strollers to cross it. This makes it easier to traverse for pedestrians, and especially for those in wheelchairs.

In Great Britain, high containment kerbs are used at locations with pedestrians, fuel station pumps, and other areas that need greater protection from vehicle traffic. These are 350 millimetres (14 in) high - much higher than standard curb, with a sloped lower portion and a concave face. These are also know as "Trief" or "Titan" curbs.

Rounded curbs are most often used at driveways, and continuously along suburban residential streets where there are many driveways and the sidewalk has a grassy setback from the street. This type starts out nearly flat like the road, curves up in a concave manner to a gentle slope, then curves back in a convex manner to nearly flat again, making it much easier to drive over, and are also known as mountable curbs in some localities.

Curbs may be constructed of many materials, including asphalt, stone or masonry blocks, but most often are made of Portland cement concrete. The type of material may depend on the type of paving material used for the road and the desired function or need. For example, a Portland concrete curb used with an asphalt concrete pavement provides a highly visible barrier at the edge of the pavement. Other types of curb material include stone slab, cobblestone, and manufactured pavers.

Concrete curb may be constructed by setting forms by hand, filling them, letting them set up, and then removing the forms. When large quantities of curb are to be constructed, it is often more efficient to use a slip form casting machine. Curbs can also be precast at a central location and trucked to the construction site.

Asphalt curb is made with a paving machine. It can be cheaper if it is formed at the same time that a road is paved, but is less durable than concrete curb.

Stone curb, often made from granite, is durable and resistant to deicing salt. It is also chosen for aesthetic reasons. In areas where granite is available, it may be cost-competitive with concrete curb.[2] One disadvantage is granite curb can cut a tire sidewall if rough-faced curb is used. [3]

Belgian block curbs are made by placing blocks over a concrete slip. Then, concrete is wedged in between each block to hold them together. These blocks can be vertical or angled in order to create a mountable curb.

When designing a curbed roadway, engineers specify the reveal. Most curb extends down into the ground next to the pavement edge. The reveal is the height of the section that is visible (revealed) above the pavement surface. Typical reveals are in the 4 to 8 inches (100 to 200 mm) range. Curbs at handicapped curb cuts should have no reveal, although Americans with Disabilities Act guidelines permit up to 0.25 inches (6.4 mm) of vertical reveal.

Curbs with integral gutters are used where better hydraulic flow performance is needed. However, this places a longitudinal joint near where bicyclists often ride. If the pavement and gutter settle differently over time, the vertical edge that developes at the joint can cause a hazard for bicyclists. [4]