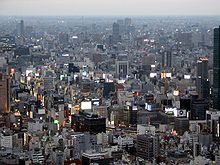 Greater Tokyo Area, the world's most populous urban area, with about 35 million people.

Urban areas with at least one million inhabitants in 2006. In 1800, 3% of the world's population lived in cities, a figure that had risen to 47% by the end of the twentieth century.

An urban area is characterized by higher population density and vast human features in comparison to areas surrounding it. Urban areas may be cities, towns or conurbations, but the term is not commonly extended to rural settlements such as villages and hamlets.

Urban areas are created and further developed by the process of urbanization. Measuring the extent of an urban area helps in analyzing population density and urban sprawl, and in determining urban and rural populations.[citation needed]

Unlike an urban area, a metropolitan area includes not only the urban area, but also satellite cities plus intervening rural land that is socio-economically connected to the urban core city, typically by employment ties through commuting, with the urban core city being the primary labor market. In fact, urbanized areas agglomerate and grow as the core population/economic activity center within a larger metropolitan area or envelope.

In the US, Metropolitan areas tend to be defined using counties or county sized political units as building blocks. Counties tend to be stable political boundaries; economists prefer to work with economic and social statistics based on metropolitan areas. Urbanized areas are a more relevant statistic for determining per capita land usage and densities.[citation needed] 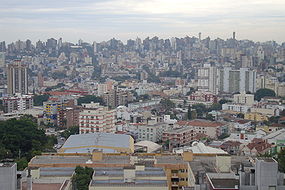 Definitions vary somewhat between nations. European countries define urbanized areas on the basis of urban-type land use, not allowing any gaps of typically more than 200 m, and use satellite imagery instead of census blocks to determine the boundaries of the urban area. In less developed countries, in addition to land use and density requirements, a requirement that a large majority of the population, typically 75%, is not engaged in agriculture and/or fishing is sometimes used.

In Australia, urban areas are referred to as "urban centres" and are defined as population clusters of 1000 or more people, with a density of at least 200/km2.[1]

According to Statistics Canada, an urban area in Canada is an area with a population of at least 1,000 people where the density is no fewer than 400 persons per square km2.[2] If two or more urban areas are within 2 km (1.2 mi) of each other by road, they are merged into a single urban area, provided they do not cross census metropolitan area or census agglomeration boundaries.[3]

In France, an urban area is a zone (aire urbaine) encompassing an area of built-up growth (called an "urban unit" (unité urbaine)[5] - close in definition to the North American urban area) and its commuter belt (couronne périurbaine). Although the official INSEE translation of aire urbaine is "urban area",[6] most North Americans would find the same as being similar in definition to their metropolitan area.

Statistics New Zealand defines New Zealand urban areas for statistical purposes as a settlement with a population of a thousand people or more.

Statistics Norway defines urban areas ("tettsteder") similarly to the other Nordic countries. Unlike in Denmark and Sweden, the distance between each building has to be of less than 50 m, although exceptions are made due to parks, industrial areas, rivers, and similar. Groups of houses less than 400 m from the main body of an urban area are included in the urban area.[7]

With an estimated population of 16.3 Mio. Metro Manila is the most populous metropolitan area in the Philippines and the 11th in the world. However, the greater urban area is the 5th largest in the world with a population of 20,654,307 people (2010 estimate).[8] Including Metro Manila, the Philippines has twelve metropolitan areas as defined by the National Economic and Development Authority (NEDA). Metro Angeles, Metro Bacolod, Metro Baguio, Metro Batangas, Metro Cagayan de Oro, Metro Cebu, Metro Dagupan, Metro Davao, Metro Iloilo-Guimaras, Metro Naga, Metro Olongapo.

In Poland, official "urban" population figures simply refer to those localities which have the status of towns (miasta). The "rural" population is that of all areas outside the boundaries of these towns. This distinction may give a misleading impression in some cases, since some localities with only village status may have acquired larger and denser populations than many smaller towns.[9]

In Russia, only the population residing in cities/towns and urban-type settlements is considered to be "urban". The city/town/urban-settlement designation means usually that the majority of the population is employed in areas other than agriculture, but the exact definitions vary from one federal subject to another.

Urban areas in Sweden (tätorter) are statistically defined localities, totally independent of the administrative subdivision of the country. There are 1956 such localities in Sweden, with a population ranging from 200 to 1,372,000 inhabitants.[10]

Main article: List of urban areas in the United Kingdom

The United Kingdom's Office for National Statistics has produced census results from urban areas since 1951, since 1981 based upon the extent of irreversible urban development indicated on Ordnance Survey maps. The definition is an extent of at least 20 ha and at least 1,500 census residents. Separate areas are linked if less than 200 m (220 yd) apart. Included are transportation features.[11] The UK has five Urban Areas with a population over a million and a further sixty nine with a population over one hundred thousand. 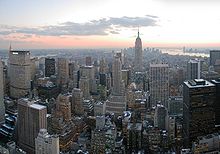 The concept of Urbanized Areas as defined by the U.S. Census Bureau is often used as a more accurate gauge of the size of a city, since in different cities and states the lines between city borders and the urbanized area of that city are often not the same. For example, the city of Greenville, South Carolina has a city population under 60,000 and an urbanized area population of over 300,000, while Greensboro, North Carolina has a city population over 200,000 and an urbanized area population of around 270,000 — meaning that Greenville is actually "larger" for some intents and purposes, but not for others, such as taxation, local elections, etc.

In the U.S. Department of Agriculture's natural resources inventory, urban areas are officially known as developed areas or urban and built-up areas. Such areas include cities, villages, other built-up areas of more than 10 ac (4 ha), industrial sites, railroad yards, cemeteries, airports, golf courses, shooting ranges, institutional and public administration sites, and similar areas. The 1997 national resources inventory placed over 98,000,000 ac (40,000,000 ha) in this category, an increase of 25,000,000 ac (10,000,000 ha) since 1982.[14]