An autonomous community (Spanish: comunidad autónoma, IPA: [komuniˈðað auˈtonoma])[note 1] is the first-level political division of the Kingdom of Spain, established in accordance with the current Spanish Constitution (1978). The second article of the constitution recognizes the rights of "nationalities and regions" to self-government and declares the "indissoluble unity of the Spanish nation".[1][2]

Political power in Spain is organized as a central government with devolved power for 17 autonomous communities. These regional governments are responsible for the administration of schools, universities, health, social services, culture, urban and rural development and, in some cases, policing.[3] There are also 2 autonomous cities.

Under the "system of autonomies" (Estado de las Autonomías), Spain has been quoted to be "remarkable for the extent of the powers peacefully devolved over the past 30 years"[4] and "an extraordinarily decentralised country", with the central government accounting for just 18% of public spending; the regional governments 38%, the local councils 13% and the social-security system the rest.[3]

In terms of personnel, by 2010 almost 1,350,000 people[5] or 50.3% of the total civil servants in Spain were employed by the autonomous communities; city councils and provincial diputaciones accounted for 23.6% and those employees working for the central administration (police and military included) represented 22.2% of the total.[6] 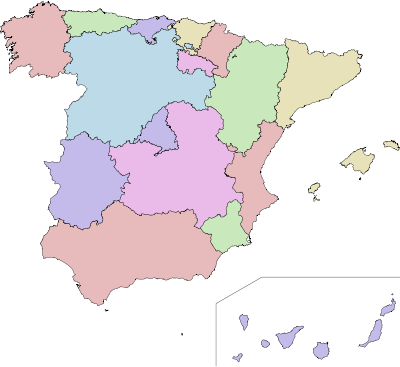 Centralism, nationalism, and separatism played an important role in the Spanish transition to democracy. For fear that separatism would lead to instability and a dictatorial backlash, a compromise was struck among the moderate political parties taking part in the drafting of the Spanish Constitution of 1978. The aim was to appease separatist forces and to disarm the extreme right. A highly decentralized state was established, compared to both the previous centralist Francoist regime and the most modern territorial arrangements in Western European nations. In this regard, the current Spanish Estado de las Autonomías is often dubbed as one of the most decentralized states in Europe.[7][8]

The constitution classified the autonomous communities to be created into two groups. Each group had a different route to accede to autonomy and was to be granted a different level of power and responsibility.[1] Catalonia, the Basque Country, and Galicia were designated "historic nationalities"[1][9] and granted autonomy through a rapid and simplified process. These three regions had voted on and approved a Statute of Autonomy in the past.

While the Constitution was still being drafted, there was a popular outcry in Andalusia for its own right to autonomy, with over a million and a half people demonstrating in the streets on 4 December 1977, which led the creation of a special quicker process for autonomy for that region, although it was not originally considered a historical nationality.[1][9] Eventually, all regions could be granted autonomy, if they complied with the requirements set forth in the constitution, and if their people wished to do so; and four additional communities self-identified as "nationalities" as well as the four already mentioned.

Between 1979 and 1983, the majority of the regions were constituted as autonomous communities, in accordance with the 143rd and the 151st articles of the constitution. Nonetheless, the case of the province of Madrid was exceptional. Since it was not a province with a separate historical regional identity but part of the cultural region of Castile, it was considered a natural province that would compose the soon-to-be Community of Castile-La Mancha. During the process that led to the autonomy of this region, the old rivalry between Toledo and Madrid resurfaced; as capital of Spain, Madrid was to enjoy a degree of self-government, and Castilians demanded absolute equality amongst the constituent provinces of the community, and thus excluded Madrid from their project of self-government.

Other alternatives included the incorporation of Madrid to the community of Castile and León (the historical region of Old Castile) or its controversial constitution as something similar to a "Federal District" or territory, emulating Mexico City, or Washington, D.C.[10] Finally, it was decided to opt for the creation of a single-province autonomous community; however, for want of a historical regional identity, Madrid was granted autonomy "in the nation's interest" through the prerogatives of the 144th article.[11]

In theory, Navarre is the only first-level political division that is not an "autonomous community" but a "chartered community", but, in practice, except for the fiscal autonomy it enjoys along with the Basque Country, it is administratively constituted as any other autonomous community and is represented in the Spanish Parliament like the rest. Although the constitution forbids the federation or union of autonomous communities, an addendum or "transitional provision" to the constitution makes an exclusion whereby Navarre could join the Basque Country if the people chose to do so.[12]

Upon the ratification of its new Constitution in 1978, Spain created a system of regional autonomy, known as the "state of the autonomies".[1] The second article of the constitution grants the right of self-government to the regions and nationalities that integrate into the Spanish nation.[2] In the exercise of the right to self-government recognized in that article, autonomy was to be granted to the following:[14]

As such, the province, which is also a territorial local entity recognized by the constitution,[15] serves as the framework from which the autonomous communities were to be created. However, the constitution allows exceptions to the above, namely that the Spanish Parliament reserves the right to:[16]

As a general rule, the communities that were granted its autonomy through the fast process have more competences and higher levels of autonomy. These competences and autonomy rights are not defined in a closed list; these can change over time.

The basic institutional law of the autonomous community is the Statute of Autonomy. The Statutes of Autonomy establish the name of the community according to its historical identity, the limits of their territories, the name and organization of the institutions of government and the rights they enjoy according the constitution.[18]

The government of all autonomous communities must be based on a division of powers comprising:

Besides Andalusia, Catalonia, the Basque Country and Galicia, which identified themselves as nationalities, other communities have also taken that denomination in accordance to their historical regional identity, such as the Valencian Community,[19] the Canary Islands,[20] the Balearic Islands,[21] and Aragon.[22]

The autonomous communities have wide legislative and executive autonomy, with their own parliaments and regional governments. The distribution of powers may be different for every community, as laid out in their Statutes of Autonomy. There used to be a clear de facto distinction between so called "historic" communities (Basque Country, Catalonia, Galicia, Andalusia) and the rest. The "historic" ones initially received more functions, including the ability of the regional presidents to choose the timing of the regional elections (as long as they happen no more than four years apart). As another example, the Basque Country, Navarre and Catalonia have full-range police forces of their own: Ertzaintza in the Basque Country, Policía Foral in Navarre and Mossos d'Esquadra in Catalonia. Other communities have a more limited force or none at all (like the Policía Autónoma Andaluza[23] in Andalusia or the BESCAM in Madrid). However, the recent amendments made to their respective Statute of Autonomy by a series of "ordinary" Autonomous Communities such as the Valencian Community or Aragon have quite diluted this original de facto distinction.

Autonomous communities are integrated by provinces (provincias), which serve as the territorial building blocks for the former. In turn, provinces are integrated by municipalities (municipios). The existence of these two subdivisions is guaranteed and protected by the constitution, not necessarily by the Statutes of Autonomy themselves. Municipalities are granted autonomy to manage their internal affairs, and provinces are the territorial divisions designed to carry out the activities of the State.[24]

The current fifty-province structure is based—with minor changes—on the one created in 1833 by Javier de Burgos. The communities of Asturias, Cantabria, La Rioja, the Balearic Islands, Madrid, Murcia and Navarre, having been granted autonomy as single-provinces for historical reasons, are counted as provinces as well.

There are three plazas de soberanía (Spanish sovereign territories) near North Africa as follows, opposite the Iberian Peninsula, uninhabited other than for military personnel:

Nowadays the Perejil Island is considered a neutral territory between Spain and Morocco, but it is dominated by Spain de facto as a fourth plaza de soberanía. Today the Alborán Island is part of the municipality of Almería, in the homonymous province.