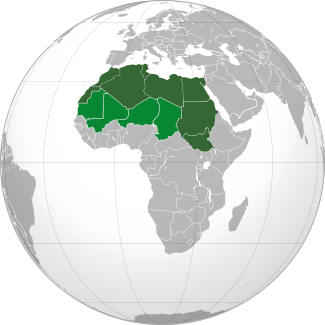 North Africa or Northern Africa is the northernmost region of the African continent, linked by the Sahara to Sub-Saharan Africa. Geopolitically, the United Nations definition of Northern Africa includes eight countries or territories; Algeria, Egypt, Libya, Morocco, South Sudan, Sudan, Tunisia, and Western Sahara.[1] Algeria, Morocco, Tunisia, Mauritania, and Libya together are also referred to as the Maghreb or Maghrib, while Egypt is a transcontinental country by virtue of the Sinai Peninsula, which is in Asia. The other notable part of North Africa is the territory of the Western Sudan. Three small Spanish plazas de soberanía – tiny islets with military bases off the coast of Morocco with no civilian population – are in the area, and the Spanish Canary Islands and Portuguese Madeira Islands, in the North Atlantic Ocean northwest of the African mainland, are sometimes included in considerations of the region.[citation needed]

The distinction between Northern Africa and the rest of Africa is historically and ecologically significant because of the effective barrier created by the Sahara. Throughout history this barrier has culturally separated the North from the rest of Africa and, as the seafaring civilizations of the Phoenicians, Greeks, Romans and others facilitated communication and migration across the Mediterranean, the cultures of North Africa became much more closely tied to Southwestern Asia and Europe than Sub-Saharan Africa. The Islamic influence in the area is significant, and North Africa, along with the Middle East, is a major part of the Arab World.

Some researchers have postulated that North Africa, and not East or South Africa, was the original home of the modern humans who first trekked out of the continent.[2][3][4] 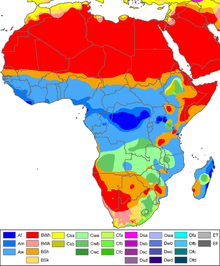 North Africa, consisting of the Sahara and north, in the northern red climatic zone and northwards

The Atlas Mountains, which extend across much of Morocco, northern Algeria and Tunisia, are part of the fold mountain system which also runs through much of Southern Europe. They recede to the south and east, becoming a steppe landscape before meeting the Sahara desert which covers more than 75% of the region. The sediments of the Sahara overlie an ancient plateau of crystalline rock, some of which is more than four billion years old.

Sheltered valleys in the Atlas Mountains, the Nile valley and delta, and the Mediterranean coast are the main sources of good farming land. A wide variety of valuable crops including cereals, rice and cotton, and woods such as cedar and cork, are grown. Typical mediterranean crops such as olives, figs, dates and citrus fruits also thrive in these areas. The Nile valley is particularly fertile, and most of Egypt's population lives close to the river. Elsewhere, irrigation is essential to improve crop yields on the desert margins.

The inhabitants of North Africa are generally divided in a manner roughly corresponding to the principal geographic regions of North Africa: the Maghreb, the Nile Valley, and the Sahara. Northwest Africa on the whole is believed to have been inhabited by Berbers since before the beginning of recorded history, while the eastern part of North Africa has been home to the Egyptians, Nubians and Beja. Ancient Egyptians record extensive contact in their Western desert with peoples that appear to have been Berber or proto-Berber.

The people of the Maghreb and the Sahara speak various dialects of Berber and Arabic, and almost exclusively follow Islam. The Arabic and Berber groups of languages are distantly related, both being members of the Afro-Asiatic family. The Sahara dialects are notably more isolated than those of coastal cities (see Tuareg languages). Over the years, Berber peoples have been influenced by other cultures with which they became in contact: Greeks, Phoenicians, Egyptians, Romans, Vandals, Arabs, Ottoman Turks and lately Europeans.

The cultures of the Maghreb and the Sahara therefore combine indigenous Berber, Arab and elements from neighboring parts of Europe, Asia and Africa. In the Sahara, the distinction between sedentary oasis inhabitants and nomadic Bedouin and Tuareg is particularly marked. The diverse peoples of the Sahara can be categorized along ethno-linguistic lines. In the Maghreb, where Arab and Berber identities are often integrated, these lines can be blurred.

Some Berber-speaking North Africans may identify as "Arab" depending on the social and political circumstances, although substantial numbers of Berbers (or Imazighen) have retained a distinct cultural identity which in the 20th century has been expressed as a clear ethnic identification with Berber history and language. Arabic-speaking Northwest Africans, regardless of ethnic background, often identify with Arab history and culture and may share a common vision with other Arabs. This, however, may or may not exclude pride in and identification with Berber and/or other parts of their heritage. Berber political and cultural activists for their part, often referred to as Berberists, may view all Northwest Africans as principally Berber, whether they are primarily Berber- or Arabic-speaking (see also Arabized Berber).

The Nile Valley traces its origins to the ancient civilizations of Egypt and Kush. The Egyptians over the centuries have shifted their language from Egyptian to modern Egyptian Arabic (both Afro-Asiatic), while retaining a sense of national identity that has historically set them apart from other people in the region. Most Egyptians are Sunni Muslim and a significant minority adheres to Coptic Christianity which has strong historical ties to the Ethiopian Orthodox Church and Eritrean Orthodox Church.

North Africa formerly had a large Jewish population, many of whom emigrated to France or Israel when the North African nations gained independence. A smaller number went to Canada. Prior to the modern establishment of Israel, there were about 600,000–700,000 Jews in North Africa, including both Sfardīm (refugees from France, Spain and Portugal from the Renaissance era) as well as indigenous Mizrāḥîm. Today, less than fifteen thousand remain in the region, almost all in Morocco and Tunisia. (See Jewish exodus from Arab lands.)

The most notable nations of antiquity in western North Africa are Carthage and Numidia. The Phoenicians colonized much of North Africa including Carthage and parts of present day Morocco (including Chellah, Mogador and Volubilis[16]). The Carthaginians were of Phoenician origin, with the Roman myth of their origin being that Queen Dido, a Phoenician princess was granted land by a local ruler based on how much land she could cover with a piece of cowhide. She ingeniously devised a method to extend the cowhide to a high proportion, thus gaining a large territory. She was also rejected by the Trojan prince Aeneas according to Virgil, thus creating a historical enmity between Carthage and Rome, as Aeneas would eventually lay the foundations for Rome. The Carthaginians were a commercial power and had a strong navy, but relied on mercenaries for land soldiers. The Carthaginians developed an empire in the Iberian Peninsula and Sicily, the latter being the cause of First Punic War with the Romans.

Over a hundred years and more, all Carthaginian territory was eventually conquered by the Romans, resulting in the Carthaginian North African territories becoming the Roman province of Africa in 146 B.C.[17] This led to tension and eventually conflict between Numidia and Rome. The Numidian wars are notable for launching the careers of both Gaius Marius, and Sulla, and stretching the constitutional burden of the Roman republic, as Marius required a professional army, something previously contrary to Roman values to overcome the talented military leader Jugurtha.[18]

North Africa remained a part of the Roman Empire, which produced many notable citizens such as Augustine of Hippo, until incompetent leadership from Roman commanders in the early fifth century allowed the Germanic barbarian tribe, the Vandals, to cross the Strait of Gibraltar, whereupon they overcame the fickle Roman defense. The loss of North Africa is considered a pinnacle point in the fall of the Western Roman Empire as Africa had previously been an important grain province that maintained Roman prosperity despite the barbarian incursions, and the wealth required to create new armies. The issue of regaining North Africa became paramount to the Western Empire, but was frustrated by Vandal victories. The focus of Roman energy had to be on the emerging threat of the Huns. In 468 AD the Romans made one last serious attempt to invade North Africa but were repelled. This perhaps marks the point of terminal decline for the Western Roman Empire. The last Roman emperor was deposed in 476 by the Heruli general Odoacer. Trade routes between Europe and North Africa remained intact until the coming of Islam. Some Berbers were Christians (but evolved their own Donatist doctrine),[19] some were Jewish, and some adhered to their traditional polytheist religion. African pope Victor I served during the reign of Roman emperor Septimus Severus, of Roman/Berber ancestry.[20] The Byzantine reconquest of North Africa from the Vandals began in 533 AD, as Justinian I sent his general Belisarius to reclaim the former Roman province of Africa. 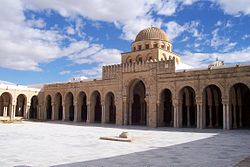 The Great Mosque of Kairouan, founded by the Arab general Uqba Ibn Nafi in 670 AD, is the oldest and most important mosque in North Africa;[21] city of Kairouan, Tunisia.

The Arab Islamic conquest reached North Africa in 640 AD. By 670, most of North Africa had fallen to Muslim rule. Indigenous Berbers subsequently started to form their own polities in response in places such as Fez, Morocco, and Sijilimasa. In the eleventh century, a reformist movement made up of members that called themselves Almoravids, expanded south into Sub-Saharan Africa.

The North Africa's populous and flourishing civilization collapsed after exhausting its resources in internal fighting and suffering devastation from the invasion of the Bedouin tribes of Banu Sulaym and Banu Hilal. Ibn Khaldun noted that the lands ravaged by Banu Hilal invaders had become completely arid desert.[22]

After the Middle Ages the area was loosely under the control of the Ottoman Empire, except Morocco. After the 19th century, the imperial and colonial presence of France, the United Kingdom, Spain and Italy left the entirety of the region under one form of European occupation.

In World War II from 1940 to 1943 the area was the setting for the North African Campaign. During the 1950s and 1960s all of the North African states gained independence. There remains a dispute over Western Sahara between Morocco and the Algerian-backed Polisario Front.

In 2010 - 2011 massive protests swept the region(as well as the middle east) leading to the overthrow of the governments in Tunisia and Egypt, as well as civil war in Libya. Large protests also occurred in Algeria and Morocco to a lesser extent. Many hundreds died in the uprisings.[23]

The economies of Algeria and Libya were transformed by the discovery of oil and natural gas reserves in the deserts. Morocco's major exports are phosphates and agricultural produce, and as in Egypt and Tunisia, the tourist industry is essential to the economy. Egypt has the most varied industrial base, importing technology to develop electronics and engineering industries, and maintaining the reputation of its high-quality cotton textiles.

Oil rigs are scattered throughout the deserts of Libya and Algeria. Libyan oil is especially prized because of its low sulphur content, which means it produces much less pollution than other fuel oils.