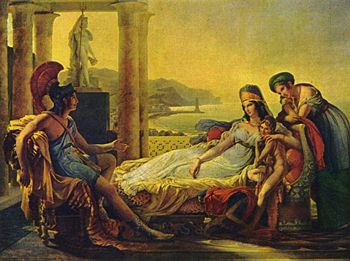 Aeneas recounting the Trojan War to Dido, a painting by Pierre-Narcisse Guérin. This scene is taken from Virgil's Aeneid, where Dido falls in love with, only to be left by, the Trojan hero Aeneas.

/ˈdaɪdoʊ/ dy-doh) was, according to ancient Greek and Roman sources, the founder and first Queen of Carthage (in modern-day Tunisia). She is best known from the account given by the Roman poet Virgil in his Aeneid. In some sources she is also known as Elissa (/iːˈlɪsə/ ee-liss-ə). 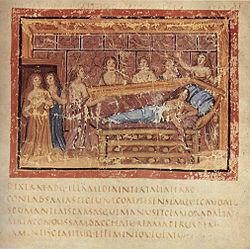 The person of Elissa can be traced back to references by Roman historians to lost writings of Timaeus of Tauromenium in Sicily (c. 356–260 BC).

Historians gave various dates, both for the foundation of Carthage and the foundation of Rome. Appian in the beginning of his Punic Wars claims that Carthage was founded by a certain Zorus and Carchedon, but Zorus looks like an alternative transliteration of the city name Tyre and Carchedon is just the Greek form of Carthage. Timaeus made Carchedon's wife Elissa the sister of King Pygmalion of Tyre. Archaeological evidence of settlement on the site of Carthage before the last quarter of the 8th century BC has yet to be found. Paucity of material for this period may be explained by rejection of the Greek Dark Age theory.[1] That the city is named