Enema
Not to be confused with Edema.

This rectal bulb syringe may be used to administer smaller enemas. 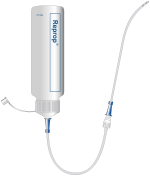 An enema (pronounced /ˈɛnəmə/; plural enemata or enemas) is the procedure of introducing liquids into the rectum and colon via the anus. The increasing volume of the liquid causes rapid expansion of the lower intestinal tract, often resulting in very uncomfortable bloating, cramping, powerful peristalsis, a feeling of extreme urgency and complete evacuation of the lower intestinal tract. An enema has the advantage over any laxative in its speed and certainty of action, and some people prefer it for this reason.

Enemas can be carried out as treatment for medical conditions, such as constipation and encopresis, and as part of some alternative health therapies. They are also used to administer certain medical or recreational drugs. Enemas have been used for rehydration therapy (proctoclysis) in patients for whom intravenous therapy is not applicable.[1]

Clyster, also spelled glister in the 17th century, comes from Greek κλυστήρ (klystḗr), from κλύζω (klýzo), "(I) wash". It is an archaic word for enema, more particularly for enemas administered using a clyster syringe – that is, a syringe with a rectal nozzle and a plunger rather than a bulb. Clyster syringes were used from the 17th century (or before) to the 19th century, when they were largely replaced by enema bulb syringes, bocks, and bags.

The patient was placed in an appropriate position (kneeling, with the buttocks raised, or lying on the side); a servant or apothecary would then insert the nozzle into the anus and depress the plunger, resulting in the liquid remedy (generally, water, but also some preparations) being injected into the colon. 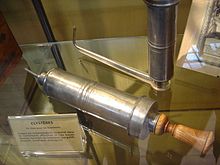 A normal clyster syringe (in front) and the nozzle for a syringe designed for self-administration (in the back). The latter avoided the need for a second party to attend an embarrassing procedure.

Clysters were administered for symptoms of constipation and, with more questionable effectiveness, stomach aches and other illnesses. In his early-modern treatise, The Diseases of Women with Child, François Mauriceau records that both midwives and man-midwives commonly administered clysters to labouring mothers just prior to their delivery.

In Roper's biography of his father-in-law Sir Thomas More, he tells of Thomas More's eldest daughter falling sick of the sweating sickness. She could not be awakened by doctors. After praying, it came to Thomas More "There straightway it came into his mind that a clyster would be the one way to help her, which when he told the physicians, they at once confessed that if there were any hope of health, it was the very best help indeed, much marveling among themselves that they had not afore remembered it." — Utopia, Thomas More.

Clysters were a favourite medical treatment in the bourgeoisie and nobility of the Western world up to the 19th century. As medical knowledge was fairly limited at the time, purgative clysters were used for a wide variety of ailments, the foremost of which were stomach aches and constipation.

Molière, in several of his plays, introduces characters of incompetent physicians and apothecaries fond of prescribing this remedy, also discussed by Argan, the hypochondriac patient of Le Malade Imaginaire. More generally, clysters were a theme in the burlesque comedies of that time.

According to Claude de Rouvroy, duc de Saint-Simon, clysters were so popular at the court of King Louis XIV of France that the duchess of Burgundy had her servant give her a clyster in front of the King (her modesty being preserved by an adequate posture) before going to the comedy. However, he also mentions the astonishment of the King and Mme de Maintenon that she should take it before them.

The main medical usages of enemas are:

In certain countries, such as the United States, customary enema usage went well into the 20th century; it was thought a good idea to cleanse the bowel in case of fever; also, pregnant women were given enemas prior to labor, supposedly to reduce the risk of feces being passed during contractions. Under some controversial discussion, pre-delivery enemas were also given to women to speed delivery by inducing contractions. This latter usage has since been largely abandoned, because obstetricians now commonly give pitocin to induce labor and because women generally found the procedure unpleasant.

Now obsolete, the tobacco smoke enema was the principal medical method for resuscitating victims of drowning during the 18th century.

Many self-given enemas used at home are the pre-packaged, disposable, sodium phosphate solutions in single-use bottles sold under a variety of brand names, or in generic formats. These units come with a pre-lubricated nozzle attached to the top of the container. Some enemas are administered using so-called disposable bags connected to disposable tubing (despite the names, such units can commonly be used for many months or years without significant deterioration).

Patients who want easier, more gently-accepted enemas often purchase combination enema syringes which are commonly referred to as "closed top" syringes, and which can also be used as old-fashioned hot water bottles, so as to relieve aches and pains via gentle heat administrations to parts of the body. Cost for each enema can be as little as the cost of baking soda added to ordinary tap water.

In Asian countries, particularly in Japan, commercially available disposable enemas typically contain glycerin (at concentrations varying from 30-50%) or sodium chloride. They are not pre-lubricated and the amount of liquid contained in them may vary, although most contain about 20-40ml of diluted glycerin.

In medical or hospital environments, reusable enema equipment is now rare because of the expense of disinfecting a water-based solution. For a single-patient stay of short duration, an inexpensive disposable enema bag can be used for several days or weeks, using a simple rinse out procedure after each enema administration. The difficulty comes from the longer time period (and expense) required of nursing aides to give a gentle, water-based enema to a patient, as compared to the very few minutes it takes the same nursing aide to give the more irritating, cold, pre-packaged sodium phosphate unit.

For home use, disposable enema bottle units are common, but reusable rubber or vinyl bags or enema bulbs may also be used. In former times, enemas were infrequently administered using clyster syringes. If such commercially-available items are not at hand, ordinary water bottles are sometimes used.

The term "colonic irrigation" is commonly used in gastroenterology to refer to the practice of introducing water through a colostomy or a surgically constructed conduit as a treatment for constipation.[3] The Food and Drug Administration has ruled that colonic irrigation equipment is not approved for sale for the purpose of general well-being[4] and has taken action against many distributors of this equipment, including a Warning Letter.[5] The use of enemas for reasons other than the relief of constipation is currently regulated in some parts of the United States while practitioners in other states may go through a voluntary certification process.

The same term is also used in alternative medicine where it may involve the use of substances mixed with water in order to detoxify the body. Practitioners believe the accumulation of fecal matter in the large intestine leads to ill health.[6] This resurrects the old medical concept of autointoxication which was orthodox doctrine up to the end of the 19th century but which has now been discredited.[7][8][9]

In the controversial Gerson therapy, coffee enemas are administered.[10] These enemas are known to have caused three deaths in the United States.[11]

An enema might be used to clean the colon of feces first to help increase the rate of absorption in rectal administration of dissolved drugs, including alcohol.[12]

Enemas have also been used for ritual rectal drug administration such as balché, alcohol, tobacco, peyote, and other hallucinogenic drugs and entheogens, most notably by the Mayans and also some other American Indian tribes. Some tribes continue the practice in the present day.[13]

People who wish to become intoxicated faster have also been known to use enemas as a method to instill alcohol into the bloodstream, absorbed through the membranes of the colon. However, great care must be taken as to the amount of alcohol used. Only a small amount is needed as the intestine absorbs the alcohol more quickly than the stomach. Deaths have resulted due to alcohol poisoning via enema.[14]

An aluminium enema nozzle. Specialty enema nozzles are common for non-medical usage, available on the Internet and in sex shops in a variety of sizes, styles, and materials.

The paraphilia directed towards enemas is known as klismaphilia, the enjoyment of enemas.

Antagonistic factions in unstable nations have often forcibly applied enemas as a means of punishment. In the vastly influential Latin American text Facundo, or Civilization and Barbarism, for example, Domingo Faustino Sarmiento describes the use of pepper and turpentine enemas by police forces as a way of discouraging political dissent in post-independence Argentina.[15]

Improper administration of an enema may cause electrolyte imbalance (with repeated enemas) or ruptures to the bowel or rectal tissues resulting in internal bleeding. However, these occurrences are rare in healthy, sober adults. Internal bleeding or rupture may leave the individual exposed to infections from intestinal bacteria. Blood resulting from tears in the colon may not always be visible, but can be distinguished if the feces are unusually dark or have a red hue. If intestinal rupture is suspected, medical assistance should be obtained immediately.[16]

The enema tube and solution may stimulate the vagus nerve, which may trigger an arrhythmia such as bradycardia. Enemas should not be used if there is an undiagnosed abdominal pain since the peristalsis of the bowel can cause an inflamed appendix to rupture.

Recent research has shown that ozone water, which is sometimes used in enemas, can immediately cause microscopic colitis.[18]