Sodium chloride, also known as salt, common salt, table salt or halite, is an inorganic compound with the formula NaCl. Sodium chloride is the salt most responsible for the salinity of the ocean and of the extracellular fluid of many multicellular organisms. As the major ingredient in edible salt, it is commonly used as a condiment and food preservative.

In solid sodium chloride, each ion is surrounded by six ions of the opposite charge as expected on electrostatic grounds. The surrounding ions are located at the vertices of a regular octahedron. In the language of close-packing, the larger chloride ions are arranged in a cubic array whereas the smaller sodium ions fill all the cubic gaps (octahedral voids) between them. This same basic structure is found in many other compounds and is commonly known as the halite or rock-salt crystal structure. It can be represented as a face-centered cubic (fcc) lattice with a two-atom basis or as two interpenetrating face centered cubic lattices. The first atom is located at each lattice point, and the second atom is located half way between lattice points along the fcc unit cell edge.

The attraction between the Na+ and Cl- ions in the solid is so strong that only highly polar solvents like water dissolve NaCl well.

When dissolved in water, the sodium chloride framework disintegrates as the Na+ and Cl- ions become surrounded by the polar water molecules. These solutions consist of metal aquo complex with the formula [Na(H2O)x]+, where x is 8 with the Na-O distance of 250 pm. The chloride ions are also strongly solvated, each being surrounded by an average of 6 molecules of water.[4] Solutions of sodium chloride have very different properties from pure water. The freezing point is −21.12 °C for 23.31 wt% of salt, and the boiling point of saturated salt solution is near 108.7 °C.[5] From cold solutions, salt crystallises as the dihydrate NaCl.2H2O.

Small particles of sea salt are the dominant cloud condensation nuclei well out at sea, which allow the formation of clouds in otherwise non-polluted air.[6] 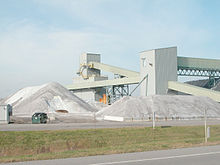 In addition to the familiar domestic uses of salt, more dominant applications of the approximately 250 megatons/year production (2008 data) include chemicals and de-icing.[9]

Salt is the source, directly or indirectly, for the production of many chemicals, which consume most of the world's production.[7]

It is the starting point for the Chloralkali process, which provides the world with chlorine and sodium hydroxide according to the chemical equation:

This electrolysis is conducted in a Down's cell in which sodium chloride is mixed with calcium chloride to lower the melting point below 700 °C. As calcium is more electropositive than sodium, no calcium will be formed at the cathode. This method is less expensive than the previous method of electrolyzing sodium hydroxide. Some application of chlorine include PVC, disinfectants, and solvents. From sodium hydroxide enables industries that produce paper, soap, and aluminium.

Sodium chloride is heavily used, so even miscellaneous applications can consume massive quantities. In oil and gas exploration, salt is an important component of drilling fluids in well drilling. It is used to flocculate and increase the density of the drilling fluid to overcome high downwell gas pressures. Whenever a drill hits a salt formation, salt is added to the drilling fluid to saturate the solution and to minimize the dissolution within the salt stratum.[9]

Salt is also used to increase the curing of concrete in cemented casings.[7] In textiles and dyeing, salt is used as a brine rinse to separate organic contaminants, to promote “salting out” of dyestuff precipitates, and to blend with concentrated dyes to standardize them. One of its main roles is to provide the positive ion charge to promote the absorption of negatively charged ions of dyes.[7]

In metal processing, salt is used in concentrating uranium ore into uranium oxide (yellow cake). It also is used in processing aluminium, beryllium, copper, steel and vanadium. In the pulp and paper industry, salt is used to bleach wood pulp. It also is used to make sodium chlorate, which is added along with sulfuric acid and water to manufacture chlorine dioxide, an excellent oxygen-based bleaching chemical. The chlorine dioxide process, which originated in Germany after World War I, is becoming more popular because of environmental pressures to reduce or eliminate chlorinated bleaching compounds. In tanning and leather treatment, salt is added to animal hides to inhibit microbial activity on the underside of the hides and to attract moisture back into the hides.[7]

In rubber manufacture, salt is used to make buna, neoprene and white rubber types. Salt brine and sulfuric acid are used to coagulate an emulsified latex made from chlorinated butadiene.[9][7]

Salt also is added to secure the soil and to provide firmness to the foundation on which highways are built. The salt acts to minimize the effects of shifting caused in the subsurface by changes in humidity and traffic load.[7]

Hard water contains calcium and magnesium ions that interfere with action of soap and contribute to the buildup of a scale or film of alkaline mineral deposits in household and industrial equipment and pipes. Commercial and residential water-softening units use ion exchange resins to remove the offending ions that cause the hardness. These resins are generated and regenerated using sodium chloride.[9][7]

The second major application of salt is for deicing and anti-icing of roads, both in grit bins and spread by winter service vehicles. In anticipation of snowfall, roads are optimally "anti-iced" with brine (concentrated solution of salt in water), which prevents bonding between the snow-ice and the road surface. This procedures precludes the heavy use of salt after the snowfall. For de-icing, mixtures of brine and salt are used, sometimes with additional agents such as calcium and magnesium chloride. The use of salt or brine becomes ineffective below -10 °C.

Salt for de-icing in the United Kingdom predominantly comes from a single mine in Winsford in Cheshire. Prior to distribution it is mixed with <100 ppm of sodium hexacyanoferrate(II) as an anti-caking agent, which enables rock salt to flow freely out of the gritting vehicles despite being stockpiled prior to use. In recent years this additive has also been used in table salt. Other additives had been used in road salt to reduce the total costs. For example, in the US, a byproduct carbohydrate solution from sugar beet processing was mixed with rock salt and adhered to road surfaces about 40% better than loose rock salt alone. Because it stayed on the road longer, the treatment did not have to be repeated several times, saving time and money.[7]

In the technical terms of physical chemistry, the minimum freezing point of a water-salt mixture is −21.12 °C for 23.31 wt% of salt. Freezing near this concentration is however so slow that the eutectic point of −22.4 °C can be reached with about 25 wt% of salt.[5]

Road salt ends up in fresh water bodies and could harm aquatic plants and animals by disrupting their osmoregulation ability.[10] The omnipresence of salt poses a problem in any coastal coating application, as trapped salts cause great problems in adhesion. Naval authorities and ship builders monitor the salt concentrations on surfaces during construction. Maximum salt concentrations on surfaces are dependent on the authority and application. The IMO regulation is mostly used and sets salt levels to a maximum of 50 mg/m2 soluble salts measured as sodium chloride. These measurements are done by means of a Bresle test.

In highway deicing, salt has been associated with corrosion of bridge decks, motor vehicles, reinforcement bar and wire, and unprotected steel structures used in road construction. Surface runoff, vehicle spraying, and windblown actions also affect soil, roadside vegetation, and local surface water and groundwater supplies. Although evidence of environmental loading of salt has been found during peak usage, the spring rains and thaws usually dilute the concentrations of sodium in the area where salt was applied.[7]

Many micro organisms cannot live in an overly salty environment: water is drawn out of their cells by osmosis. For this reason salt is used to preserve some foods, such as smoked bacon or fish. It can also be used to detach leeches that have attached themselves to feed. It is also used to disinfect wounds.

Salt is added in most food items, by the food processor or by the consumer, as a flavor enhancer, preservative, binder, fermentation-control additive, texture-control agent and color developer. The salt consumption in the food industry is subdivided, in descending order of consumption, into other food processing, meat packers, canning, baking, dairy and grain mill products. Salt is added to promote color development in bacon, ham and other processed meat products. As a preservative, salt inhibits the growth of bacteria. Salt acts as a binder in sausages to form a binding gel made up of meat, fat, and moisture. Salt also acts as a flavor enhancer and as a tenderizer.[7]

In the dairy industry, salt is added to cheese as a color-, fermentation-, and texture-control agent. The dairy subsector includes companies that manufacture creamery butter, condensed and evaporated milk, frozen desserts, ice cream, natural and processed cheese, and specialty dairy products. In canning, salt is primarily added as a flavor enhancer and preservative. It also is used as a carrier for other ingredients, dehydrating agent, enzyme inhibitor and tenderizer. In baking, salt is added to control the rate of fermentation in bread dough. It also is used to strengthen the gluten (the elastic protein-water complex in certain doughs) and as a flavor enhancer, such as a topping on baked goods. The food-processing category also contains grain mill products. These products consist of milling flour and rice and manufacturing cereal breakfast food and blended or prepared flour. Salt is also used a seasoning agent, e.g. in potato chips, pretzels, cat and dog food.[7]

Sodium chloride is used in veterinary medicine as emesis causing agent. It is given as warm saturated solution. Emesis can also be caused by pharyngeal placement of small amount of plain salt or salt crystals. 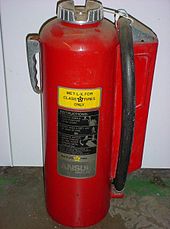 Sodium chloride is the principal extinguishing agent in fire extinguishers (Met-L-X, Super D) used on combustible metal fires such as magnesium, potassium, sodium, and NaK alloys (Class D). Thermoplastic powder is added to the mixture, along with waterproofing (metal stearates) and anti-caking materials (tricalcium phosphate) to form the extinguishing agent. When it is applied to the fire, the salt acts like a heat sink, dissipating heat from the fire, and also forms an oxygen-excluding crust to smother the fire. The plastic additive melts and helps the crust maintain its integrity until the burning metal cools below its ignition temperature. This type of extinguisher was invented in the late 1940s in the cartridge-operated type shown here, although stored pressure versions are now popular. Common sizes are 30 lb portable and 350 lb wheeled.

Since at least medieval times, people have used salt as a cleansing agent rubbed on household surfaces. It is also used in many brands of shampoo, toothpaste and popularly to de-ice driveways and patches of ice.

For further information about sodium chloride in the diet, see Salt.

In humans, a high-salt intake has long been suspected to generally raise blood pressure.[citation needed] More recently, it was demonstrated to attenuate nitric oxide production. Nitric oxide (NO) contributes to vessel homeostasis by inhibiting vascular smooth muscle contraction and growth, platelet aggregation, and leukocyte adhesion to the endothelium.[11][12]