Osmoregulation is the active regulation of the osmotic pressure of an organism's fluids to maintain the homeostasis of the organism's water content; that is it keeps the organism's fluids from becoming too diluted or too concentrated. Osmotic pressure is a measure of the tendency of water to move into one solution from another by osmosis. The higher the osmotic pressure of a solution the more water wants to move into the solution. Pressure must be exerted on the hypertonic side of a selectively permeable membrane to prevent diffusion of water by osmosis from the side containing pure water.

Organisms in both aquatic and terrestrial environments must maintain the right concentration of solutes and amount of water in their body fluids; this involves excretion (getting rid of metabolic wastes and other substances such as hormones that would be toxic if allowed to accumulate in the blood) via organs such as the skin and the kidneys; keeping the amount of water and dissolved solutes in balance is referred to as osmoregulation. 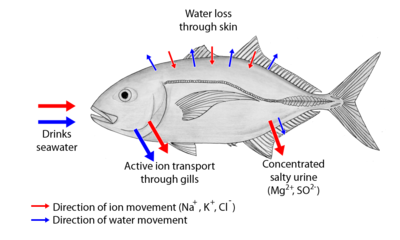 Movement of water and ions in saltwater fish 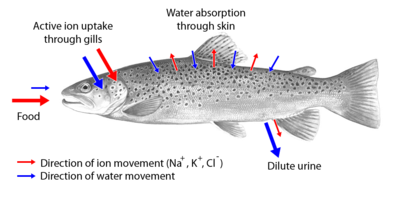 Movement of water and ions in freshwater fish

Osmoregulators tightly regulate their body osmolarity, which always stays constant, and are more common in the animal kingdom. Osmoregulators actively control salt concentrations despite the salt concentrations in the environment. An example is freshwater fish. The gills actively uptake salt from the environment by the use of mitochondria-rich cells. Water will diffuse into the fish, so it excretes a very hypotonic (dilute) urine to expel all the excess water. A marine fish has an internal osmotic concentration lower than that of the surrounding seawater, so it tends to lose water and gain salt. It actively excretes salt out from the gills. Most fish are stenohaline, which means they are restricted to either salt or fresh water and cannot survive in water with a different salt concentration than they are adapted to. However, some fish show a tremendous ability to effectively osmoregulate across a broad range of salinities; fish with this ability are known as euryhaline species, e.g. Salmon.

Some marine fish have adopted a different but efficient mechanism to conserve water, i.e. osmoregulation. They retain urea in their blood in relatively higher concentration; this helps them to retain a nearly hypertonic environment with higher solute but lower salt concentration. However, urea is damaging to living tissue, so, to cope with this problem some fish retain trimethylamine oxide, this provides a better solution to urea's toxicity.

Whilst there are no specific osmoregulatory organs in higher plants the stomata are important in regulating water loss through evapotranspiration and on the cellular level the vacuole is crucial in regulating the concentration of solutes in the cytoplasm. Strong winds, low humidity and high temperatures all increase evapotranspiration from leaves. Abscisic acid is an important hormone in helping plants to conserve water - it causes stomata to close and stimulates root growth so that more water can be absorbed.

Plants share with animals the problems of obtaining water but unlike in animals the loss of water in plants is crucial to create a driving force to move nutrients from the soil to tissues. Certain plants have evolved methods of water conservation. Xerophytes are plants that can survive in dry habitats, such as deserts, and are able to withstand prolonged periods of water shortage. Succulent plants such as the cacti store water in the vacuoles of large parenchyma tissues. Other plants have leaf modifications to reduce water loss, such as needle-shaped leaves, sunken stomata, and thick, waxy cuticles as in the pine. The sand-dune marram grass has rolled leaves with stomata on the inner surface. Hydrophytes are plants in water habitats. They mostly grow in water or in wet or damp places. In these plants the water absorption occur through the whole surface of the plant, e.g. the water lily.

Osmoregulation in protists and animals 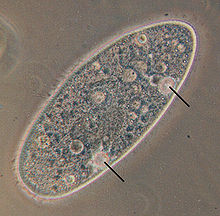 Amoeba make use of contractile vacuoles to collect excretory waste, such as ammonia, from the intracellular fluid by both diffusion and active transport. As osmotic action pushes water from the environment into the cytoplasm, the vacuole moves to the surface and disposes the contents into the environment.

Kidneys play a very large role in human osmoregulation, regulating the amount of water in urine waste. With the help of hormones such as antidiuretic hormone, aldosterone, and angiotensin II, the human body can increase the permeability of the collecting ducts in the kidney to reabsorb water and prevent it from being excreted.

A major way animals have evolved to osmoregulate is by controlling the amount of water excreted through the excretory system.

Waste products of the nitrogen metabolism

Ammonia is a toxic by-product of protein metabolism and is generally converted to less toxic substances after it is produced then excreted; mammals convert ammonia to urea, whereas birds and reptiles form uric acid to be excreted with other wastes via their cloacas.