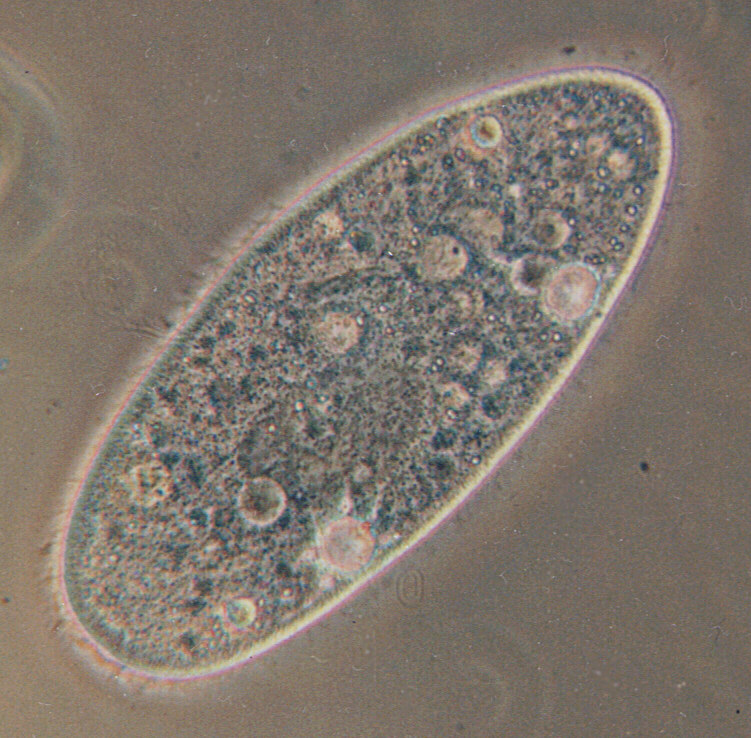 Paramecia are a group of formerly known as “slipper s” from their shape, are commonly studied as a representative of the ciliate group, and range from about 50 to 350 μm in length, depending on species. Simple cover the body, which allow the cell to move with a synchronous motion (like a caterpillar). There is also a deep oral groove containing inconspicuous compound oral cilia (as found in other s) used to draw food inside. They generally feed on and other small cells. is carried out by a pair of s, which actively expel water absorbed by from their surroundings.

Paramecia are widespread in freshwater environments, and are especially common in . Paramecia are attracted by ic conditions. Certain single-celled eukaryotes, such as "Paramecium", are examples for exceptions to the universality of the genetic code (translation systems where a few codons differ from the standard ones).

The paramecium approximates a , rounded at the front and pointed at the back. The pellicle is a stiff but elastic membrane that gives the paramecium its definite shape. Covering the pellicle are many tiny hairs, called cilia. On the side beginning near the front end continuing down half way is the oral groove, which collects food until it is swept into the cell mouth. There is an opening near the back end called the anal pore. The contractile vacuole and its radiating canals &mdash; referred to previously for osmoregulation of the organism, are also found on the outside of a paramecium.

Paramecia feed on microorganisms like bacteria, algae, and yeasts. To gather its food, the paramecium uses its cilia to sweep the food along with some water into the cell mouth after it falls into the oral groove. The food goes through the cell mouth into the gullet, which is like the stomach. When enough food has accumulated at the gullet base, it invaginates there to form a food vacuole in the cytoplasm, and travels through the cell, through the back end first. As it moves along, enzymes from the cytoplasm enter the vacuole to digest the contents, digested nutrients then going into the cytoplasm, and the vacuole shrinks. When the vacuole reaches the anal pore, it ruptures, expelling its waste contents to the exterior.

One of the most interesting known relationships is that of "Paramecium aurelia" and its bacterial endosymbionts. The bacteria infect the protozoa, and they produce toxic particles that kill sensitive strains, but not killer strains. See also the Chlorella symbiosis with .

Giant s, for instance, have 2 types of endosymbiotes, which seem to function as in these amoebas. Another example involves protozoa bacteria that produce cellulases to assist the host protozoan with cellulose digestion (similar to those found in some in ). This is a cell that appears at quiet ponds.

In some ciliates, like "Stylonychia" and "Paramecium", only UGA decoded as a stop codon, while UAG and UAA are reassigned as sense codons. [Lekomtsev, S, Kolosov, P., et al. (2007) "Different modes of stop codon restriction by the "Stylonychia" and "Paramecium" eRF1 translation termination factors", "PNAS", 104(26):10824-9 [http://www.pnas.org/cgi/external_ref?access_num=17573528&link_type=PUBMED] ]

The question of whether paramecia exhibit learning has been the object of a great deal of experiment and partaying, yielding equivocal results. In one of the most recent experiments published [ Armus, H.L., Montgomery, A.R., Jellison, J.L. (2006) "Discrimination Learning in Paramecia (P. caudatum)" , The Psychological Record, 56,489-498 [http://www.accessmylibrary.com/coms2/summary_0286-29269289_ITM] ] , the authors, by using a voltage as a reinforcement, concluded that "paramecium" may indeed learn to discriminate between different brightness levels.