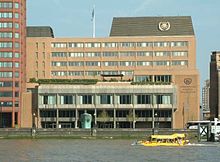 The International Maritime Organization (IMO), formerly known as the Inter-Governmental Maritime Consultative Organization (IMCO), was established in Geneva in 1948,[1] and came into force ten years later, meeting for the first time in 1959. The IMCO name was changed to IMO in 1982.[2]

Headquartered in London, United Kingdom, the IMO is a specialized agency of the United Nations with 169 Member States and three Associate Members.[2] The IMO's primary purpose is to develop and maintain a comprehensive regulatory framework for shipping and its remit today includes safety, environmental concerns, legal matters, technical co-operation, maritime security and the efficiency of shipping. IMO is governed by an Assembly of members and is financially administered by a Council of members elected from the Assembly. The work of IMO is conducted through five committees and these are supported by technical subcommittees. Member organizations of the UN organizational family may observe the proceedings of the IMO. Observer status is granted to qualified non-governmental organizations.

The IMO is supported by a permanent secretariat of employees who are representative of its members. The secretariat is composed of a Secretary-General who is periodically elected by the Assembly, and various divisions such as those for marine safety, environmental protection, and a conference section.

IMCO was formed to fulfill a desire to bring the regulation of the safety of shipping into an international framework, for which the creation of the United Nations provided an opportunity. Hitherto such international conventions had been initiated piecemeal, notably the Safety of Life at Sea Convention (SOLAS), first adopted in 1914 following the Titanic disaster.[2] IMCO's first task was to update that Convention; the resulting 1960 Convention was subsequently recast and updated in 1974 and it is that Convention that has been subsequently modified and updated to adapt to changes in safety requirements and technology.

When IMCO began its operations in 1958 certain other pre-existing instruments were brought under its aegis, most notable the International Convention for the Prevention of Pollution of the Sea by Oil (OILPOL) 1954. Throughout its existence IMCO, renamed the IMO in 1982, has continued to produce new and updated instruments across a wide range of maritime issues covering not only safety of life and marine pollution but also encompassing safe navigation, search and rescue, wreck removal, tonnage measurement, liability and compensation, ship recycling, the training and certification of seafarers, and piracy. More recently SOLAS has been amended to bring an increased focus on maritime security through the International Ship and Port Facility Security (ISPS) Code. The IMO has also increased its focus on air emissions from ships.

In 1983 the IMO established the World Maritime University in Malmö, Sweden.

Members of the IMO are 170 of the UN members and the Cook Islands.

IMO is the source of approximately 60 legal instruments that guide the regulatory development of its member states to improve safety at sea, facilitate trade among seafaring states and protect the maritime environment. The most well known is the International Convention for the Safety of Life at Sea (SOLAS).

IMO regularly enacts regulations, which are broadly enforced by national and local maritime authorities in member countries, such as the International Regulations for Preventing Collisions at Sea (COLREG). The IMO has also enacted a Port State Control (PSC) authority, allowing domestic maritime authorities such as coast guards to inspect foreign-flag ships calling at ports of the many port states. Memoranda of Understanding (protocols) were signed by some countries unifying Port State Control procedures among the signatories.

Recent initiatives at the IMO have included amendments to SOLAS, which upgraded fire protection standards on passenger ships, the International Convention on Standards of Training, Certification and Watchkeeping for Seafarers (STCW) which establishes basic requirements on training, certification and watchkeeping for seafarers and to the Convention on the Prevention of Maritime Pollution (MARPOL 73/78), which required double hulls on all tankers.

In December 2002, new amendments to the 1974 SOLAS Convention were enacted. These amendments gave rise to the International Ship and Port Facility Security (ISPS) Code, which went into effect on 1 July 2004. The concept of the code is to provide layered and redundant defenses against smuggling, terrorism, piracy, stowaways, etc. The ISPS Code required most ships and port facilities engaged in international trade to establish and maintain strict security procedures as specified in ship and port specific Ship Security Plans and Port Facility Security Plans.

The IMO is also responsible for publishing the International Code of Signals for use between merchant and naval vessels.

The First Intersessional Meeting of IMO’s Working Group on Greenhouse Gas Emissions from Ships took place in Oslo, Norway (23–27 June 2008), tasked with developing the technical basis for the reduction mechanisms that may form part of a future IMO regime to control greenhouse gas emissions from international shipping, and a draft of the actual reduction mechanisms themselves, for further consideration by IMO’s Marine Environment Protection Committee (MEPC).[3]

The IMO is pursuing an effort to harmonize information available to seafarers and shore-side traffic services called e-Navigation. An e-Navigation strategy was ratified in 2005, and an implementation plan is being developed through three IMO sub-committees. The plan is expected to be completed in 2012.[4]

The IMO has also served as a key partner and enabler of U.S. international and interagency efforts to establish Maritime Domain Awareness.

The governing body of the International Maritime Organisation is the Assembly which meets every two years. In between Assembly sessions a Council, consisting of 40 Member States elected by the Assembly, acts as the governing body. The technical work of the International Maritime Organisation is carried out by a series of Committees. The Secretariat consists of some 300 international civil servants headed by a Secretary-General.[5]

The current Secretary-General is Efthimios E. Mitropoulos, elected for a four-year term on 18 June 2003. On 9 November 2006 at the ninety-seventh session of the IMO Council, Mr. Mitropoulos' mandate was renewed for a further four years until 31 December 2011.[1]

The technical work of the International Maritime Organisation is carried out by a series of Committees. This includes:[5]

It is regulated in the Article 28(b) of the Convention on the IMO:.

The Maritime Safety Committee is the most senior of these and is the main Technical Committee; it oversees the work of its nine sub-committees and initiates new topics. One broad topic it deals with is the effect of the human element on casualties; this work has been put to all of the sub-committees, but meanwhile, the Maritime Safety Committee has developed a code for the management of ships which will ensure that agreed operational procedures are in place and followed by the ship and shore-side staff.[5]

The work of the nine sub-committees is described by their titles, as follows:

The sub-committees work on numerous topics, including, for example, improvements in the design of passenger ships and the requirements for the stowage and packaging of the vast range of dangerous goods carried by sea.

Resolution MSC.255(84) (adopted on 16 May 2008) adopts the Code of the International Standards and Recommended Practices for a Safety Investigation into a Marine Casualty or Marine Incident ( Casualty Investigation Code).[6]