Marine salvage is the process of rescuing a ship, its cargo, or other property from peril. Salvage encompasses rescue towing, refloating a sunken or grounded vessel, or patching or repairing a ship. Today the protection of the environment from cargoes such as oil or other contaminants is often considered a high priority.

"Salvors" are seamen and engineers who carry out salvage to vessels that are not owned by themselves, and who are not members of the vessel's original crew. When salvaging large ships, they may use cranes, floating dry docks and divers to lift and repair ships for short journeys to safety towed by a tugboat. The aim of the salvage may be to repair the vessel at a harbour or dry dock, or to clear a channel for navigation. Another reason for salvage may be to prevent pollution or damage to the marine environment. Alternatively the vessel or valuable parts of the vessel or its cargo may be recovered for its resale value, or for scrap.

Refloating of a 200 foot barge at the port of Tampa Florida.

The refloating of ships stranded or sunk in exposed waters is called offshore salvage. In this type of salvage, vessels are exposed to waves, currents and weather and are the most vulnerable and difficult to work on. They also tend to deteriorate more rapidly than such vessels in protected harbors. Offshore salvage may provide only a short window of opportunity for the salvage team due to unusually high tide or inclement weather for instance. The work window may not come around again for as long as weeks or months and in the interim, the vessel will continue to deteriorate. As a result, it is often imperative to work quickly. Typically, offshore salvage is conducted from pre-outfitted salvage tugs and other tugboats. In addition, portable diving facilities may be transported by helicopter or small boat to the work area. From a tactical point of view, working in unprotected waters is less hospitable for floating cranes, construction tenders, dredges and equipment barges. Plus, it is often difficult to depend upon a stable workforce (welders, carpenters, etc.) as all personnel must be present on site for the duration 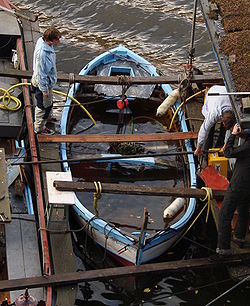 A house boat dinghy being salvaged in an Amsterdam canal

The term harbor salvage refers to the salvage of vessels stranded or sunk in sheltered waters. Such vessels are not normally subject to the same deterioration caused by marine and weather conditions as offshore salvage vessels are. In addition, unless the vessel to be salvaged is obstructing navigation, then there is no need to work as swiftly as in offshore salvage. Also, harbor pre-salvage survey and planning stages tend to be less time consuming and environmentally dependent. It is also easier to gain access to local labor resources and heavy equipment such as floating cranes and barges.

Saving the cargo and equipment aboard a vessel may be of higher priority than saving the vessel itself. The cargo may pose an environmental hazard or may include expensive materials such as machinery or precious metals. In this form of salvage, the main focus is on the rapid removal of goods and may include deliberate dissection, disassembly or destruction of the hull.

Wreck removal focuses on the removal of hazardous or unsightly wrecks that have little or no salvage value. Because the objectives here are not to save the vessel, the wrecks are usually refloated or removed by the cheapest and most practical method possible. In many cases, hazardous materials must be removed prior to disposing of the wreck. The most common techniques used in wreck removal are cutting the hull into easily handled sections or refloating the vessel and scuttling it in deeper waters.

The salvage of a vessel that is damaged but still afloat is called afloat salvage. This type of salvage is mostly unobtrusive and involves primarily damage control work such as hull welding, stabilization (rebalancing ballast tanks and shifting cargo) and structural bracing. The vessel can remain underway with little disruption to its original purpose and crew.

Clearance salvage is the coordinated removal or salvage of numerous vessels in a harbor or waterway. It typically follows a catastrophic event such as a tsunami, hurricane or an act of war (i.e. Pearl Harbor). There may be multiple vessel obstructions with varying degrees of damage due to collision, fire or explosions.[1]

Salvage projects may vary with respect to urgency and cost considerations. When the vessel to be returned to service is commercial, the salvage operation is typically driven by its commercial value and impact on navigational waterways. Military vessels on the other hand are often salvaged at any cost – even to exceed their operational value because of national prestige and anti “abandonment” policies. Another consideration may be loss of revenue and service or the cost of the space it occupies.

USS Regulus hard aground in 1971 due to a typhoon: after three weeks of effort, Naval salvors deemed it unsalvageable.

There are three types of salvage:

In contract salvage the owner of the property and salvor enter into a salvage contract prior to the commencement of salvage operations and the amount that the salvor is paid is determined by the contract. This can be a fixed amount, based on a "time and materials" basis, or any other terms that both parties agree to. The contract may also state that payment is only due if the salvage operation is successful (a.k.a. "No Cure, No Pay"),[2] or that payment is due even if the operation is not successful.

In pure salvage (also called "merit salvage"), there is no contract between the owner of the goods and the salvor. The relationship is one which is implied by law. The salvor of property under pure salvage must bring his claim for salvage in a court which has jurisdiction, and this will award salvage based upon the "merit" of the service and the value of the salvaged property.

Pure salvage claims are divided into "high-order" and "low-order" salvage. In high-order salvage, the salvor exposes himself and his crew to the risk of injury and loss or damage to his equipment in order to salvage the property that is in peril. Examples of high-order salvage are boarding a sinking ship in heavy weather, boarding a ship which is on fire, raising a ship, plane, or other sunken property, or towing a ship which is in the surf away from the shore. Low-order salvage occurs where the salvor is exposed to little or no personal risk. Examples of low-order salvage include towing another vessel in calm seas, supplying a vessel with fuel, or pulling a vessel off a sand bar. Salvors performing high order salvage receive substantially greater salvage award than those performing low order salvage.

In order for a claim to be awarded three requirements must be met: The property must be in peril, the services must be rendered voluntarily (no duty to act), and finally the salvage must be successful in whole or in part.

Private boat owners, to protect themselves from salvage laws in the event of a rescue, would be wise to clarify with their rescuer if the operation is to be considered salvage, or simply assistance towing. If this is not done, the boat owner may be shocked to discover that the rescuer may be eligible for a substantial salvage award, and a lien may be placed on the vessel if it is not paid.

Several Navies have Rescue Salvage vessels which are to support their fleet and to come to the aid of vessels in distress. Some naval operations of salvage are initiated after a failed search for survivors operations.

Ship salvage and the law

Salvage law has as a basis that a salvor should be rewarded for risking his life and property to rescue the property of another from peril. Salvage law is in some ways similar to the wartime law of prize, the capture, condemnation and sale of a vessel and its cargo as a spoil of war, insofar as both compensate the salvor/captors for risking life and property.[3] The two areas of law may dovetail. For instance, a vessel taken as a prize, then recaptured by friendly forces on its way to the prize adjudication, is not deemed a prize of the rescuers (title merely reverts to the original owner). But the rescuing vessel is entitled to a claim for salvage.[4] Likewise a vessel found badly damaged, abandoned and adrift after enemy fire disabled her does not become a prize of a rescuing friendly vessel, but the rescuers may claim salvage.[5]

A vessel is considered in peril if it is in danger or could become in danger. Examples of a vessel in peril are when it is aground or in danger of going aground. Prior to a salvage attempt the salvor receives permission from the owner or the master to assist the vessel. If the vessel is abandoned no permission is needed.

The amount of the award depends on, in part, the value of the salved vessel, the degree of risk involved and the degree of peril the vessel was in. Legal disputes do arise from the claiming of salvage rights. To reduce the amount of a claim after an accident, boat owners or skippers often remain on board and in command of the vessel; they do everything possible to minimise further loss and seek to minimize the degree of risk the vessel is in. If another vessel offers a tow and the master or owner negotiates an hourly rate before accepting then salvage does not apply.

Some maritime rescue organisations, such as Britain's Royal National Lifeboat Institution, insist the crews of their lifeboats renounce their right to claim compensation for salvage.

In the United Kingdom under the Merchant Shipping Act 1995, jetsam, flotsam, lagan and all other cargo and wreckage remain the property of their original owners. Anyone, including recreational divers and beachcombers, removing those goods must inform the Receiver of Wreck to avoid the accusation of theft. As the leisure activity of wreck diving is common, there are laws to protect historic wrecks of archaeological importance and the Protection of Military Remains Act 1986 protects ships and aircraft that are the last resting place of the remains of members of the armed forces.

The 1910 Brussels Convention for the Unification of Certain Rules with Respect to Assistance and Salvage at Sea reflects the traditional legal principles of marine salvage. The 1989 International Convention on Salvage incorporated the essential provisions of the 1910 Convention, and added some new provisions besides. The 1989 Salvage Convention entered force on 14 July 1996 with nearly twenty parties in agreement. For states which are parties to both conventions, the 1989 Convention takes precedence over the 1910 one where their provisions are mutually incompatible. 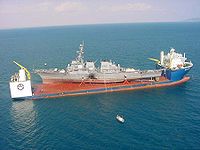 The Cole being carried by the MV Blue Marlin.