Half-hull of the 46-gun ship of the line Tigre, build from 1724 in Toulon after plans by Blaise Coulomb

A hull is the watertight body of a ship or boat. Above the hull is the superstructure and/or deckhouse, where present. The line where the hull meets the water surface is called the waterline.

The structure of the hull varies depending on the vessel type. In a typical modern steel ship, the structure consists of watertight and non-tight decks, major transverse and longitudinal members called watertight (and also sometimes non-tight) bulkheads, intermediate members such as girders, stringers and webs, and minor members called ordinary transverse frames, frames, or longitudinals, depending on the structural arrangement. The uppermost continuous deck may be called the "upper deck," "weather deck," "spar deck," "main deck" or simply "deck." The particular name given depends on the context—the type of ship or boat, the arrangement, or even the area where it sails. Not all hulls are decked (for instance a dinghy).

In a typical wooden sailboat, the hull is constructed of wooden planking, supported by transverse frames (often referred to as ribs) and bulkheads, which are further tied together by longitudinal stringers or ceiling. Often but not always there is a centerline longitudinal member called a keel. In fiberglass or composite hulls, the structure may resemble wooden or steel vessels to some extent, or be of a monocoque arrangement. In many cases, composite hulls are built by sandwiching thin fiber-reinforced skins over a lightweight but reasonably rigid core of foam, balsa wood, impregnated paper honeycomb or other material.

The shape of the hull is entirely dependent upon the needs of the design. Shapes range from a nearly perfect box in the case of scow barges, to a needle-sharp surface of revolution in the case of a racing multihull sailboat. The shape is chosen to strike a balance between cost, hydrostatic considerations (accommodation, load carrying and stability) and hydrodynamics (speed, power requirements, and motion and behavior in a seaway).

Hulls come in many varieties and can have composite shape, (e.g., a fine entry forward and inverted bell shape aft), but are grouped primarily as follows:

After this they can be categorized as:

the hull is supported exclusively or predominantly by buoyancy. They travel through the water at a limited rate which is defined by the waterline length. They are often heavier than planing types, though not always.

the hull form is capable of developing a moderate amount of dynamic lift, however, most of the vessel's weight is still supported through buoyancy 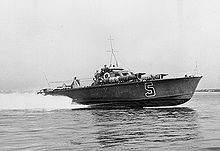 the planing hull form is configured to develop positive dynamic pressure so that its draft decreases with increasing speed. The dynamic lift reduces the wetted surface and therefore also the drag. They are sometimes flat-bottomed, sometimes V-bottomed and sometimes round-bilged. The most common form is to have at least one chine, which makes for more efficient planing and can throw spray down. Planing hulls are more efficient at higher speeds, although they still require more energy to achieve these speeds. (see: Planing (sailing), Hull speed).

At present, the most widely used form is the round bilge hull.[1]

Smooth curve hulls are hulls which use, just like the curved hulls, a sword or an attached keel.

Semi round bilge hulls are somewhat less round. The advantage of the semi-round is that it is a nice middle between the S-bottom and chined hull. Typical examples of a semi-round bilge hull can be found in the Centaur and Laser cruising dinghies.

S-bottom hulls are hulls shaped like an s. In the s-bottom, the hull runs smooth to the keel. As there are no sharp corners in the fuselage. Boats with this hull have a fixed keel, or a kielmidzwaard. This is a short fixed keel, with a swing keel inside. Examples of cruising dinghies that use this s-shape are the yngling and Randmeer.

A chined hull consists of straight plates, which are set at an angle to each other. The chined hull is the most simple hull shape because it works with only straight planks. These boards are often bent lengthwise. Most home-made constructed boats are chined hull boats. The Cajun "pirogue" is an example of a craft with hard chines. Benefits of this type of boating activity is the low production cost and the (usually) fairly flat bottom, making the boat faster at planing. Chined hulls can also make use of a daggerboard or attached keel.

Chined hulls can be divided up into 3 shapes:

Bow is the frontmost part of the hull

Stern is the rear-most part of the hull

Waterline is an imaginary line circumscribing the hull that matches the surface of the water when the hull is not moving.

Baseline an imaginary reference line used to measure vertical distances from. It is usually located at the bottom of the hull. 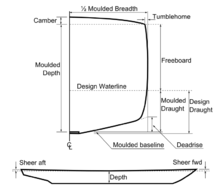 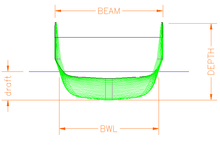 Hull forms are defined as follows:

1) Block Coefficient (Cb) is the volume (V) divided by the LWL x BWL x T. If you draw a box around the submerged part of the ship, it is the ratio of the box volume occupied by the ship. It gives a sense of how much of the block defined by the Lpp, beam (B) & draft (T) is filled by the hull. Full forms such as oil tankers will have a high Cb where fine shapes such as sailboats will have a low Cb.

2) Midship Coefficient (Cm or Cx) is the cross-sectional area (Ax) of the slice at Midships (or at the largest section for Cx) divided by beam x draft. It displays the ratio of the largest underwater section of the hull to a rectangle of the same overall width and depth as the underwater section of the hull. This defines the fullness of the underbody. A low Cm indicates a cut-away mid-section and a high Cm indicates a boxy section shape. Sailboats have a cut-away mid-section with low Cx whereas cargo vessels have a boxy section with high Cx to help increase the Cb.

3) Prismatic Coefficient (Cp) is the volume (V) divided by Lpp x Ax. It displays the ratio of the immersed volume of the hull to a volume of a prism with equal length to the ship and cross-sectional area equal to the largest underwater section of the hull (midship section). This is used to evaluate the distribution of the volume of the underbody. A low or fine Cp indicates a full mid-section and fine ends, a high or full Cp indicates a boat with fuller ends. Planing hulls and other highspeed hulls tend towards a higher Cp. Efficient displacement hulls travelling at a low Froude number will tend to have a low Cp.

Rafts have a hull of sorts, however, hulls of the earliest design are thought to have each consisted of a hollowed out tree bole: in effect the first canoes. Hull form then proceeded to the Coracle shape and on to more sophisticated forms as the science of Naval architecture advanced.