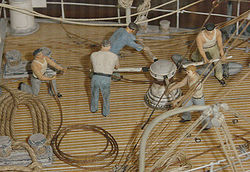 A portion of a model depicting a manual capstan in use. The sailors would coordinate the rhythm of their movements by singing a particular type of sea shanty as they walked around the capstan.

A capstan is a vertical-axled rotating machine developed for use on sailing ships to apply force to ropes, cables, and hawsers. The principle is similar to that of the windlass, which has a horizontal axle.

The word, connected with the Old French capestan or cabestan(t), from Old Provençal cabestan, from capestre "pulley cord," from Latin capistrum, -a halter, from capere, to take hold of, seems to have come into English (14th century) from Portuguese or Spanish shipmen at the time of the Crusades.[1] Both device and word are considered Spanish inventions.[2] 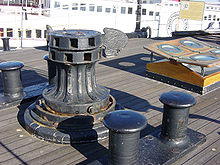 A capstan on a sailing ship. The upper portion operates the anchor windlass below in the Forecastle

In its earliest form, the capstan consisted of a timber mounted vertically through a vessel's structure which was free to rotate. Levers, known as bars, were inserted through holes at the top of the timber and used to turn the capstan. A rope wrapped several turns around the drum was thus hauled upon. A rudimentary ratchet was provided to hold the tension. The ropes were always wound in a clockwise direction (seen from above).

Capstans evolved to consist of a wooden drum or barrel mounted on an iron axle. Two barrels on a common axle were used frequently to allow men on two decks to apply force to the bars. Later capstans were made entirely of iron, with gearing in the head providing a mechanical advantage when the bars were pushed counterclockwise. One form of capstan was connected by a shaft and gears to an anchor windlass on the deck below.

Modern capstans are powered electrically, hydraulically, pneumatically, or via an internal combustion engine. Typically, a gearbox is used which trades reduced speed, relative to the prime mover, for increased torque.

A capstan differs from a windlass, which is used for similar purposes, in having the axis on which the rope is wound vertical instead of horizontal. In yachting terminology, winches function on the same principle as capstans, though in industrial applications, the term winch generally implies a machine which stores the rope on a drum.

Hydraulically-powered capstans were sometimes used in railway goods yards for shunting, or shifting railcars short distances. One example was Broad Street goods station in London. The yard was on a deck above some warehouses, and the deck was not strong enough to carry a locomotive, so ropes and capstans were used instead.