1. A stiff strip used to support the roach of a sail, enabling increased sail area
2. Any thin strip of material (wood, plastic etc) which can be used any number of ways

1. To make fast a line around a fitting, usually a cleat or belaying pin.
2. To secure a climbing person in a similar manner.
3. An order to halt a current activity or countermand an order prior to execution.

1. Bight, a loop in rope or line—a hitch or knot tied on the bight is one tied in the middle of a rope, without access to the ends.
2. An indentation in a coastline.

1. (historically) A vessel with two square-rigged masts.
2. (in the US) An interior area of the ship used to detain prisoners (possibily prisoners-of-war, in war-time) & stowaways, and to punish delinquent crew members. Usually resembles a prison-cell with bars and a locked, hinged door. 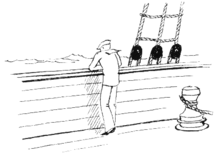 1. A spar, similar to a bowsprit, but which projects from the stern. May be used to attach the backstay or mizzen sheets.
2. An iron bar (projecting out-board from a ship's side) to which the lower and topsail brace blocks are sometimes hooked.

1. To prepare an anchor, after raising it by lifting it with a tackle to the cat head, prior to securing (fishing) it alongside for sea. (An anchor raised to the cat head is said to be catted.)
2. The cat o' nine tails (see below).
3. A cat-rigged boat or catboat.

1. Wooden blocks at the side of a spar.
2. The sides of a block or gun-carriage.

1. Treating old sails with oil or wax to renew them.
2. A verbal reprimand.

1. A smooth curve, usually referring to a line of the hull which has no deviations.
2. To make something flush.
3. A line is fair when it has a clear run.
4. A wind or current is fair when it offers an advantage to a boat.

1. The distance across water which a wind or waves have traveled.
2. To reach a mark without tacking.

1. A tapered wooden tool used for separating the strands of rope for splicing.
2. A bar used to fix an upper mast in place.

1. To repair a mast or spar with a fillet of wood.
2. To secure an anchor on the side of the ship for sea (otherwise known as "catting".)

1. A curvature of the topsides outward towards the gunwale.
2. A pyrotechnic signalling device, usually used to indicate distress.

1. The opposite of clear. For instance, a rope is foul when it does nor run straight or smoothly, and an anchor is foul when it is caught on an obstruction.
2. A breach of racing rules.
3. An area of water treacherous to navigation due to many shallow obstructions such as reefs, sandbars, or many rocks, etc.

1. The spar that holds the upper edge of a four-sided fore-and-aft mounted sail.
2. A hook on a long pole to haul fish in.

1. The toilet or latrine of a vessel, which in sailing ships projected from the bows.
2. The top edge of a sail.

1. A fore-and-aft structural member of the hull fitted over the keel to provide a fixing for the garboard planks.
2. A rough flat scrubbing brush for cleaning a ship’s bottom under water.

1. Attachment of sheets to deck of vessel (main-sheet horse).
2. (v.) To move or adjust sail by brute hand force rather than using running rigging.

1: A sailor. Also jack tar or just tar.
2: A flag. Typically the flag was talked about as if it were a member of the crew. Strictly speaking, a flag is only a "jack" if it is worn at the jackstaff at the bow of a ship.

1: Old cordage past its useful service life as lines aboard ship. The strands of old junk were teased apart in the process called picking oakum.
2: A sailing ship of classic Chinese design with characteristic full batten sails that span the masts usually on unstayed rigs.

1. A mitred backing timber which extends the after line of the rabbet in the stem to give extra support to the ends of the planks and the bowsprit.
2. A bollard or bitt.
3. Either of two timbers rising from the keel of a sailing ship and supporting the inner end of the bowsprit.

1. Shipboard lifeboat, kept on board a vessel and used to take crew and passengers to safety in the event of the ship being abandoned.
2. Rescue lifeboat, usually launched from shore, used to rescue people from the water or from vessels in difficulty.

1. A small vessel used as a tender to larger vessels.
2. A small "race built" galleon, squared rigged with either two or three masts.

1. Reef: To temporarily reduce the area of a sail exposed to the wind, usually to guard against adverse effects of strong wind or to slow the vessel.
2. Reef: Rock or coral, possibly only revealed at low tide, shallow enough that the vessel will at least touch if not go aground.

1. A method of preparing an anchor for tripping by attaching an anchor cable to the crown and fixing to the ring by a light seizing (also known as becue). The seizing can be broken if the anchor becomes fouled.
2. A type of clinker dinghy, characteristically beamy and slow.

1. A barrel with a hole in used to hold water that sailors would drink from. By extension (in modern naval usage), a shipboard drinking fountain or water cooler.
2. Slang for gossip.

1. A storm from the south west.
2. A type of waterproof hat with a wide brim over the neck, worn in storms. 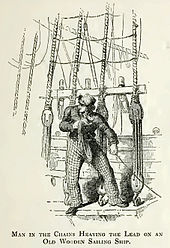 1. Measuring the depth of water beneath a ship using a lead-weighted sounding line. Regarded as a relatively easy job, thus:
2. Feigning illness etc to avoid a hard job.

1. A leg of the route of a sailing vessel, particularly in relation to tacking (qv) and to starboard tack and port tack (also qv).
2. Hard tack: qv.
3. The front bottom corner of a sail.

1. Zig-zagging so as to sail directly towards the wind (and for some rigs also away from it).
2. Going about (qv).

1. The bottom of the ship touching the bottom, but not grounding.
2. Stopping at a dock or pier for a very short time without tying up, to let off or take on crew or goods.

1. Relationship of ship's hull to waterline.
2. Adjustments made to sails to maximize their efficiency.

1. A rope leading from gaff to either side of the deck, used to prevent the gaff from sagging.
2. See boom vang.

1: Waterway, a navigable body of water.
2: A strake of timber laid against the frames or bulwark stanchions at the margin of a laid wooden deck, usually about twice the thickness of the deck planking.