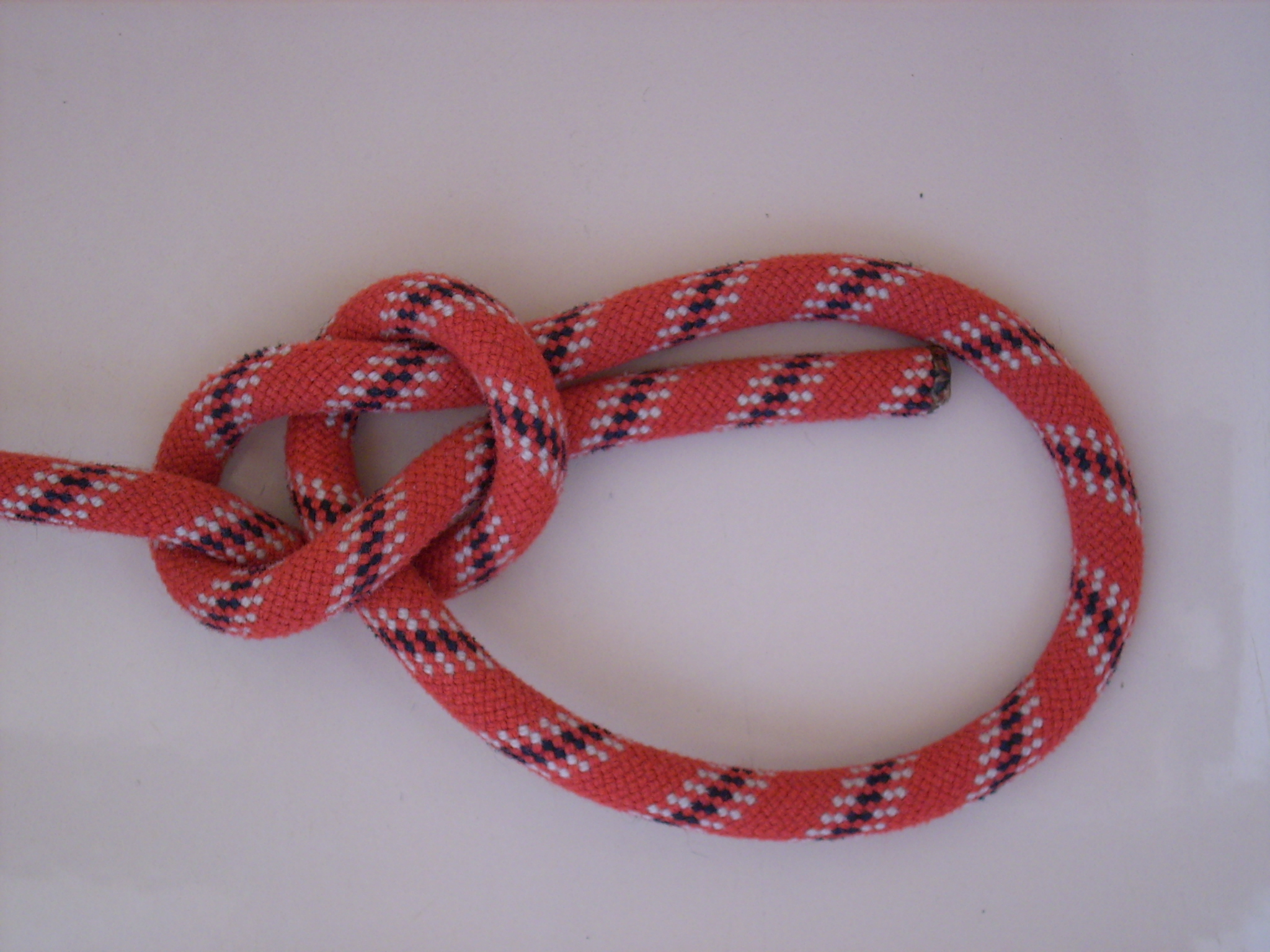 The bowline (pron-en|ˈboʊlɪn or IPA|/ˈboʊlaɪn/ [Random House] ) is an ancient but simple used to form a fixed loop at the end of a rope. The structure of the bowline is identical to that of the , except the bowline forms a loop in one rope and the sheet bend joins two ropes. Along with the sheet bend and the , is often considered one of the most essential knots. [Cassidy 1985, "The Klutz Book of Knots"]

The name has an earlier meaning, dating to the . On a square-rigged ship, a bowline (sometimes spelled as two words, "bow line") is a rope that holds the edge of a square towards the bow of the ship and into the wind, preventing it from being . [ cite book | first = Clifford W | last = Ashley | title = The Ashley Book of Knots | publisher = Doubleday |date = 1944 | pages = 186 ] A ship is said to be on a "taut bowline" when these lines are made as taut as possible in order to sail close-hauled to the wind. ["Kemp's Yachting Dictionary"]

A very old knot, the bowline was first mentioned in John Smith's 1627 work, "A Seaman's Grammar", [ cite web | url = http://www.shipbrook.com/jeff/seamansgrammar/ | title = A Seaman's Grammar | publisher = Randal and Taylor | date = 1691 reprinting | pages = 25 ] though a "curiously intricate knot… akin to the bowline" was discovered on the rigging of the ian 's solar ship during an excavation.Fact|date=October 2007

The bowline is used mainly to make a temporary loop at the end of a line. Like the other similar knots, it can be made and then secured over an object like a post. Since the bowline is generally tied with the , it can be passed through a ring or other object before the knot is tied. This feature makes the bowline a convenient and useful loop knot.

The bowline, or more commonly one of its variations such as the , is sometimes used by climbers to tie the end of the rope to a climbing harness, or the like. The advantage of the bowline in this application is that the knot is easy to untie even after it has been loaded. The disadvantage is that, while it is a very strong knot under load, it has a tendency to loosen up and become untied when it is unloaded and shaken around over a period of time, as might happen during a climb. Several other knots are more commonly used in modern climbing technique.

A rope with a bowline retains about 65% of its strength at the location of the knot. [ cite web | title = Knot Break Strength vs Rope Break Strength | author = Dave Richards, Technical Director, Cordage Institute | url = http://www.caves.org/section/vertical/nh/50/knotrope.html ]

A used to teach the tying of the bowline is to imagine the end of the rope as a rabbit, and where the knot will begin on the standing part, a tree trunk. First a loop is made near the end of the rope, which will act as the rabbit's hole. Then the "rabbit" comes up the hole, around and under the tree, and then back down the hole. When this configuration is tightened, a bowline has been tied. An alternative "lightning method" can also be used.