East Malaysia comprises the states of Sabah and Sarawak, and the Federal territory of Labuan. 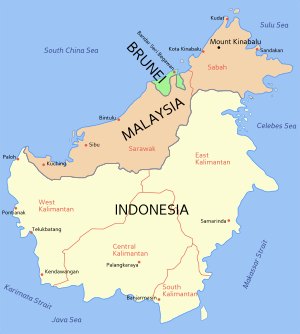 A map of Borneo showing East Malaysia in orange. Major cities are indicated. Labuan is too small to be shown.

East Malaysia, also known as Malaysian Borneo,[1] is the part of Malaysia located on the island of Borneo. It consists of the Malaysian states of Sabah and Sarawak, and the Federal Territory of Labuan.[2] It lies to the east from Peninsular Malaysia (West Malaysia),[3] which is located on the Malay Peninsula. The two are separated by the South China Sea.[4] While East Malaysia is less populated and less developed than West Malaysia, its land mass is larger and it has notably more natural resources, chiefly oil and gas reserves. 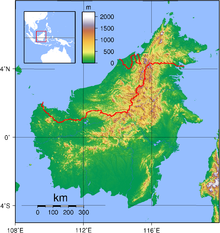 A topographic map of Borneo with East Malaysia located on the northern portion of the island.

The landscape of East Malaysia is mostly lowland rain forests with areas of mountain rain forest towards the interior regions.

Of note, Sarawak contains the Mulu caves within Gunung Mulu National Park. Its Sarawak Chamber has the largest known cave chamber in the world. The Mulu national park was declared a World Heritage Site in November 2000.[9]

See also: History of Sabah and Kingdom of Sarawak

Some parts of present-day East Malaysia, especially the coastal regions, were once part of the thalassocracy of the Sultanate of Brunei.[12] However, most parts of the interior region consisted of independent tribal societies.

In the mid 17th century, the north and eastern coast of Sabah was ceded to the Sultanate of Sulu while most of Sarawak remained part of Brunei. Beginning the mid 19th century, both Sabah and Sarawak became British protectorates and in 1946 both became separate British colonies.

Sabah and Sarawak retained a higher degree of local government and legislative autonomy when compared to other states in West Malaysia. For example, both states have separate immigration controls, requiring Malaysian citizens from West Malaysia to carry passports or identity cards when visiting East Malaysia.

The island of Labuan joined Malaysia and became part of Sabah in 1963 before becoming a Federal Territory in 1984. It was used to establish a centre for offshore finance in 1990.[13]

It has been a source of debate whether the states of Sabah and Sarawak joined the Federation of Malaysia as equal partners with Malaya and Singapore or whether they became merely equal partners of the states of Malaya (Peninsular Malaysia).[14] The consensus seems to be that Sabah and Sarawak are merely one of the states in the federation with a slightly higher degree of autonomy compared to other states in Peninsular Malaysia. For example, the East Malaysian states have separate laws regulating the entry of citizens from other states in Malaysia, including the other East Malaysian state, whereas, in Peninsular, there are no restriction for interstate travel or migration, including visitors from East Malaysia. There are also separate land law governing Sabah and Sarawak, instead of the National Land Code which governs the whole of Peninsular Malaysia.

The earliest inhabitants of East Malaysia are the Dayak people and other related ethnic groups such as the Dusun people. These indigenous inhabitants form a significant portion of the population of East Malaysia, however they do not represent the majority population. There are significant migration into East Malaysia and Borneo from many parts of the Malay Archipelago since hundreds of years ago, including from Java, Lesser Sunda Islands, Sulawesi and Sulu. There are also recent migrations from further regions such as India and China.

The indigenous inhabitants are originally animists. Islamic influence had reached East Malaysia from as early as the 15th century while there are also Christian influence beginning the 19th century.

The rural areas in Borneo can only be accessible by air or by rivers. River transport is especially prevalent in Sarawak because there are many large and long rivers with Rajang River being the most used river in Sarawak. Rivers are used by boats and ferries for transporting passengers and communications between inland areas and coastal towns. Timber is also transported via vessels and log carriers down the rivers of Sarawak.[16]