A line eye-spliced to a snap shackle.

Rope splicing in ropework is the forming of a semi-permanent joint between two ropes or two parts of the same rope by partly untwisting and then interweaving their strands. Splices can be used to form a stopper at the end of a line, to form a loop or an eye in a rope, or for joining two ropes together. Splices are preferred to knotted rope, since while a knot reduces the strength by as much as 40% or more, some splices can retain up to 95% of the strength of the line. However, splicing usually results in a thickening of the line and if subsequently removed a distortion of the rope. Most types of splices are used on 3 strand rope, but some can be done on 12 or greater strand braided rope.

A short splice, with ends whipped

Splices are often tapered to make the thicker splice blend into the rest of the line. There are two main types of tapering, the standard and the "West Coast Taper". 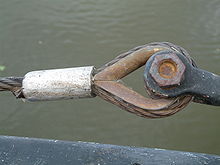 A mechanical splicing system was invented and patented by Talurit, a Swedish company.

A fid is a hand tool made from wood, plastic, or bone and is used in the process of working with rope. It is conical instrument with a somewhat long taper. A variety of fid diameters are available depending on the size of rope being used.

A Marlinspike is a tool, commonly part of a sailor's pocketknife, used to separate strands of rope from one another. It can be a 3"-4" steel spike, slightly curved, with a non-sharp point that tapers quickly out to a 1/4" to 3/8" shaft in the space of the first 1" length. Marlinspikes for splicing wire rope generally run from 6" up to 36" and are tapered but not curved.