A bend is a knot used to join two lengths of rope. 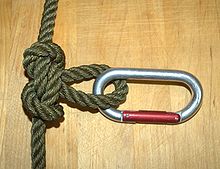 The alpine butterfly loop is a knot that can be tied on the bight.
Main article: Bight (knot)

A bight has two meanings in knotting. It can mean either any central part of a rope (between the standing end and the working end) or an arc in a rope that is at least as wide as a semicircle.[1] In either case, a bight is a length of rope that does not cross itself.[2] Knots that can be tied without use of the working end are called knots on the bight.

Binding knots are knots that either constrict a single object or hold two objects snugly together. Whippings, seizings and lashings serve a similar purpose to binding knots, but contain too many wraps to be properly called a knot.[1] In binding knots, the ends of rope are either joined together or tucked under the turns of the knot. 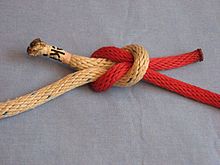 The reef knot can capsize if one of its standing ends is pulled.

A knot that has capsized has deformed into a different structure. Although capsizing is sometimes the result of incorrect tying or misuse, it can also be done purposefully in certain cases to strengthen the knot (see the carrick bend).[3]

Chirality is the 'handedness' of a knot. Topologically speaking, a knot and its mirror image may or may not have knot equivalence.[4] 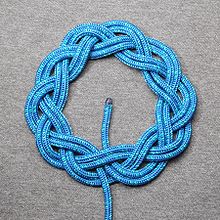 Although primarily tied for decorative purposes, the Turk's head knot can serve as a hand grip when tied around a cylindrical object.[5]
Main article: List of decorative knots

A decorative knot is any aesthetically pleasing knot. Although it is not necessarily the case, most decorative knots also have practical applications or were derived from other well-known knots.[5] Decorative knotting is one of the oldest and most widely distributed folk art.[5]

Knot dressing is the process of arranging a knot in such a way as to improve its performance. Crossing or uncrossing the rope in a specific way, depending on the knot, can increase the knot's strength as well as reduce its jamming potential.[6]

An elbow refers to any two nearby crossings of a rope. An elbow is created when an additional twist is made in a loop.[7]

A flake refers to any number of turns in a coiled rope. Likewise, to flake a rope means to coil it.[1]

Fraps are a set of loops coiled perpendicularly around the wraps of a lashing as a means of tightening.[8] 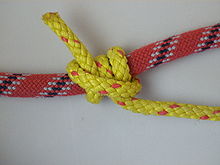 The rolling hitch is a common type of friction hitch.

A friction hitch is a knot that attaches one rope to another in a way that allows the knot's position to easily be adjusted. Sometimes friction hitches are called slide-and-grip knots.[9] They are often used in climbing applications.\

A hitch is a knot that attaches a rope to some object, often a ring, rail, spar, or post.[10]

A jamming knot is any knot that becomes very difficult to untie after use.[11] Knots that are resistant jamming are called non-jamming knots.

A lashing is an arrangement of rope used to secure two or more items together in a rigid manner. Common uses include the joining scaffolding poles and the securing of sailing masts.[12][13] The square lashing, diagonal lashing, and shear lashing are well-known lashings used to bind poles perpendicularly, diagonally, and in parallel, respectively.[14]

A loop is one of the fundamental structures used to tie knots. It is a full circle formed by passing the working end of a rope over itself. When the legs of a closed loop are crossed to form a loop, the rope has taken a turn.[1] 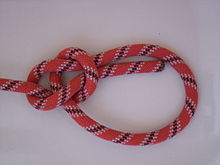 The bowline is a common loop knot.
See also: List of loop knots

A loop knot is the type of knot that forms a fixed loop. It is created either when the end of a rope is fastened to its own standing part or when a loop in the bight of a rope is knotted. Unlike a hitch, a loop knot creates a fixed loop in a rope that maintains its structure regardless of whether or not it is fastened to an object. In other words, a loop knot can be removed from an object without losing its shape.[1] 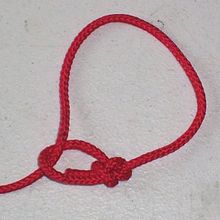 The running bowline is a type of noose.
Main article: Noose

A noose can refer to any sliding loop in which the loop tightens when pulled.[3]

An open loop is a curve in a rope that resembles a semicircle in which the legs are not touching or crossed. The legs of an open loop are brought together narrower than they are in a bight.[1] 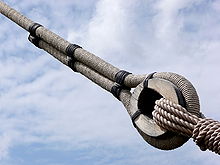 The eye of a forestay is secured by three round seizings

A seizing is a knot that binds two pieces of rope together side by side, normally in order to create a loop. The structure of seizings are similar to that of lashings.[15]

Setting a knot is the process of tightening it. Improper setting can cause certain knots to underperform.[6] 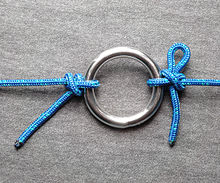 The slipped form of the buntline hitch (on the right) can easily be untied by pulling the hanging end and withdrawing the loop.

A slipped knot is any knot that unties when an end is pulled. Thus, tying the slipped form of a knot makes it easier to untie, especially when the knot is prone to jamming.[1]

Splicing is a method of joining two ropes done by untwisting and then re-weaving the rope's strands.[16]

The standing end (or standing part) of a rope is the part not active in knot tying.[1] It is the part opposite of the working end.[3]

A whipping is a binding knot tied around the end of a rope to prevent the rope from unraveling.[15]

The working end (or working part) of a rope is the part active in knot tying.[1] It is the part opposite of the standing end.[3]