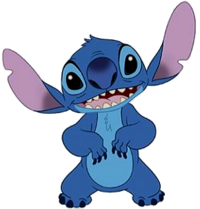 Image of experiment 626, also known as Stitch. The most popular of the experiments.

This is a list of experiments from the Disney animated Lilo & Stitch franchise, a series of fictional characters, most of which make their first appearances in Lilo & Stitch: The Series. These experiments are genetically engineered creatures created by Dr. Jumba Jookiba in his lab at "Galaxy Defense Industries", with the assistance of Dr. Jacques von Hämsterviel who funded the projects with "shady" business deals. Prior to the events of Lilo & Stitch, every experiment created was dehydrated into a small orb called an "experiment pod" and stored in a special container for transport. In Stitch! The Movie, the container was accidentally opened and the pods rained down on the island of Kauaʻi. The experiments within the pods are reactivated upon contact in water, a point of concern because many of the experiments are dangerous and Kauaʻi hosts one of the wettest spots on Earth.

Upon encountering each experiment, Stitch's human friend and partner Lilo gives the experiment a name just as she gave Stitch his name. The two then attempt to rehabilitate the experiments and find a purpose for them on Earth that suits their specific abilities, referred to as the "one true place" they belong.

Stitch, inspired by Hawaiian terminology, refers to the other experiments as his "cousins" and considers them all a part of his ʻohana, or "extended family". All of Jumba's original 626 experiments have their names and numbers listed alongside the credits in Leroy & Stitch.

For the most part, the colors of the experiment pods correspond to the series numbers, however some of the pods are colored incorrectly.

It is notable that though all experiments have unique capabilities and functions, most of them have some abilities in common. For one thing, most seem capable of scaling walls like a gecko (as Stitch frequently does); many are able to grow and retract an extra pair of arms and they all seem to be immune to aging, as the experiments remain the same while Lilo and the rest of humanity grow older in the episode "Skip", when Lilo uses the titular experiment to travel to the future to experience adulthood.

Experiments with an unknown number