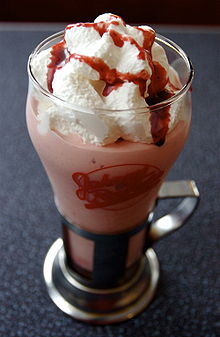 A strawberry milkshake topped with whipped cream and strawberry syrup .

A milkshake is a sweet, cold beverage which is made from milk, ice cream or iced milk, and flavorings or sweeteners such as fruit syrup or chocolate sauce.

Full-service restaurants, soda fountains, and diners usually prepare and mix the shake "by hand" from scoops of ice cream and milk in a blender or drink mixer using a stainless steel cup. Many fast food outlets do not make shakes by hand with ice cream. Instead, they make shakes in automatic milkshake machines which freeze and serve a premade milkshake mixture consisting of milk, a sweetened flavoring agent, and a thickening agent. However, some fast food outlets still follow the traditional method, and some serve milkshakes which are prepared by blending soft-serve ice cream (or ice milk) with flavoring or syrups.

Hand-blended milkshakes can be made from any flavor of ice cream, and additional flavorings, such as chocolate syrup and/or malt extract or malt powder, can be added prior to mixing. This allows a greater variety than is available in machine-made shakes. Several decades ago, milkshakes were made without ice cream [1].

Milkshake-like recipes which use yogurt, crushed ice, and fresh fruit and which are made without ice cream are usually called smoothies. When malted milk is added, a milkshake is called a malted milkshake, or simply a malt. They are also called thick milkshakes in the United Kingdom, a frappe (pronounced "frap") in parts of New England and Canada.[2] In Rhode Island and Southeastern Massachusetts, coffee syrup or coffee-flavored ice cream is used to make the local "coffee frappe" shake. Milkshakes with added fruit called batido are popular in Latin America and in Miami's Cuban expatriate community.[3] In Nicaragua, milkshakes are called leche malteada.[4]

Fast-food shakes are made using one of two methods: automatic milkshake machines and soft serve ice cream mixed with flavored syrups. Also they use the hand made or blended.

Some fast-food restaurants such as Dairy Queen serve milkshakes which are prepared by blending soft-serve ice cream (or ice milk) with sweetened, flavored syrups such as chocolate syrup and fruit-flavored syrup and milk.

Pre-made milkshakes are sold in grocery stores in North America and the UK. These drinks are made from milk mixed with sweetened flavored powder, artificial syrup or concentrate, which would otherwise be called "flavored milk", thickened with carrageenan or other products. Bottled milkshakes are usually sold in 330ml, 500ml or 1 liter bottles. 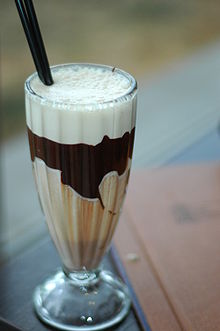 When the term "milkshake" was first used in print in 1885, milkshakes were an alcoholic whiskey drink that has been described as a "sturdy, healthful eggnog type of drink, with eggs, whiskey, etc., served as a tonic as well as a treat".[5] However, by 1900, the term referred to "wholesome drinks made with chocolate, strawberry, or vanilla syrups." By the "early 1900s people were asking for the new treat, often with ice cream." By the 1930s, milkshakes were a popular drink at malt shops, which were the "typical soda fountain of the period... used by students as a meeting place or hangout."[5]

The history of the electric blender, malted milk drinks and milkshakes are interconnected. Before the widespread availability of electric blenders, milkshake-type drinks were more like eggnog, or they were a hand-shaken mixture of crushed ice and milk, sugar, and flavorings.[6] Hamilton Beach's drink mixers began being used at soda fountains in 1911 and the electric blender or drink mixer was invented by Steven Poplawski in 1922. With the invention of the blender, milkshakes began to take their modern, whipped, aerated, and frothy form. Malted milk drinks are made with malted milk powder, which contains dried milk, malted barley and wheat flour. Malted milk powder was invented in 1897 by William Horlick as an easily digested restorative health drink for invalids and children, and as an infant's food.

The use of malted milk powder in milkshakes was popularized in the USA by the Chicago drugstore chain Walgreens. In 1922, Walgreens' employee Ivar "Pop" Coulson made a milkshake by adding two scoops of vanilla ice cream to the standard malted milk drink recipe (milk, chocolate syrup and malt powder).[7] This item, under the name "Horlick's Malted Milk," was featured by the Walgreen drugstore chain as part of a chocolate milk shake, which itself became known as a "malted" or "malt" and became one of the most popular soda-fountain drinks.[8]

The automation of milkshakes developed in the 1930s, after the invention of freon-cooled refrigerators provided a safe, reliable way of automatically making and dispensing ice cream. In 1936, inventor Earl Prince used the basic concept behind the freon-cooled automated ice cream machine to develop the Multimixer, a "five-spindled mixer that could produce five milkshakes at once, all automatically, and dispense them at the pull of a lever into awaiting paper cups."

In the late 1930s, several newspaper articles show that the term "frosted" was used to refer to milkshakes made with ice cream. In 1937, the Denton Journal in Maryland stated that "For a 'frosted' shake, add a dash of your favorite ice cream." In 1939, the Mansfield News in Ohio stated that "A frosted beverage, in the vernacular, is something good to which ice cream has been added. Example par excellence is frosted coffee—that hot, tasty beverage made chilly with ice and frosty with ice cream."[9]

These establishments made milkshakes in Hamilton Beach or similar styles of drink mixers, which had spindles and agitators that folded air into the drinks for "smooth, fluffy results" and served them in 12½-ounce tall, "y"-shaped glasses. Soda fountain staff had their own jargon, such as "Burn One All the Way" (chocolate malted with chocolate ice cream), "Twist It, Choke It, and Make It Cackle" (chocolate malted with an egg) "Shake One in the Hay" (a strawberry shake) and a "White Cow" (a vanilla milkshake).[11] In the 1950s, a milkshake machine salesman named Ray Kroc bought exclusive rights to the 1930s-era Multimixer milkshake maker from inventor Earl Prince, and went on to use automated milkshake machines[12] to speed up production at McDonald's restaurants.

In the 1950s, milkshakes were called "frappes", "velvets," "frosted [drinks]", or "cabinets" in different parts of the US. A specialty style of milkshake, the "concrete" was "...a milk shake so thick that the server hands it out the order window upside down, demonstrating that not a drop will drip." In 1952, the Newport Daily News in Rhode Island contained a "Guide For Top Quality ICE CREAM SODAS CABINETS MILK SHAKES", which shows the use of the term "cabinet" in print. An article from 1953 in the Salisbury Times (in the state of Maryland) suggests that shakes can be made in a jar by shaking well. The article states that by adding four large tablespoons of ice cream, the drink becomes a "frosted shake."[13]

In the 2000s, milkshakes began being used as part of the new trend of boutique-style "spa dentistry," which aim to relax dental patients and reduce their anxiety. Spa dentistry uses aromatherapy, massages, music playing through headphones to reduce patient's tension. At the end of the a filling or root canal in a spa dentistry treatment, patients are given an icy milkshake "...to soothe mouth soreness and delay the desire for heavier foods while the effects of the anesthesia dissipate."[14]

In 2005, the traditional home of the milkshake, the family restaurants and 24-hour diner-style restaurants that were the "staples of 1950s and 60s America such as Denny's, Big Boy and the International House of Pancakes" were supplanted "...in terms of revenue for the first time since the US census started measuring this in the 1970s. The shift means the burger, fries and milkshake ideal evoked by the sitcom Happy Days is losing its hold on the American appetite." Instead, US consumers are going out to casual dining restaurants.[15]

In 2006, the US Agricultural Research Service developed reduced-sugar, low-fat milk shakes for lunch programs. The shakes have half the sugar and only 10% of the fat of commercial fast-food shakes. Schools need a milk shake machine or soft-serve ice cream machine to serve the milkshakes. The milkshakes also have added fiber and other nutrients, and they have much less lactose, which makes the shakes appropriate for some lactose intolerant people.[16]

Despite the downturn in family restaurant business, the US sales of milkshakes, malts and floats rose 11% in 2006, according to the industry research firm NPD Group. Christopher Muller, the director of the Center for Multi-Unit Restaurant Management at Orlando's University of Central Florida states that "milkshakes remind us of summer, youth — and indulgence", and "they're evocative of a time gone by".[17] Muller states that milkshakes are an "enormously profitable" item for restaurants, since the fluffy drinks contain so much air. The market research firm Technomic claims that about 75% of the average-priced $3.38 restaurant shake in 2006 was profit. An executive from Sonic Drive-In, a US chain of 1950s-style diner restaurants, calls shakes "...one of our highest-volume, revenue-producing areas".[17]

Part of the increase in milkshake sales reported in 2006 may be due to the increasing availability of innovative chef-designed milkshakes in high-end restaurants. In 2006, the Los Angeles Times reported that chefs from "hipster hangouts and retro landmarks" are using "macerated farmers market strawberries, Valrhona chocolate and Madagascar Bourbon vanilla" to make new milkshake flavors.

In 2003, a "fast-food chain that wanted to improve milk shake sales and profits" initially tried using focus groups to find out what factors in milkshakes attracted customers (e.g., price, amount of chocolate), but the profits did not increase. The restaurant hired researchers to study why customers purchased fast-food milkshakes, as a way of finding out which factors would help the restaurant to increase sales.

The researchers found that, contrary to their expectations, "...nearly half of all milk shakes were bought in the early morning", and usually, the "...shake was the only item purchased, and it was rarely consumed in the restaurant." The researchers determined that most of the customers were buying a milkshake to sip slowly during their "long, boring commute." They wanted a food product that could be consumed with one hand, and that would not risk soiling their hands or work clothes (a danger with toast and jam or sausage and egg bagelwiches).

The researchers concluded that good strategies for increasing sales for this target market would be to make the milkshakes thicker and longer-lasting, add in fruit chunks (to make drinking it more interesting), or add in an express self-serve line for milkshake customers.[19]

"Milkshake" is the title of a 2003 R&B–electro song written and produced by The Neptunes for American singer Kelis' third studio album, Tasty. It reached the top ten in the United Kingdom, Australia and the Netherlands, and became Kelis' biggest success to date on Billboard Hot 100 in the United States, peaking at number three. The song became an Internet meme following the release of Paul Thomas Anderson's 2007 film There Will Be Blood, in which scenes from the film (most notably from its famous "I drink your milkshake" scene) were edited to the song.[20][21] The line became something of a catchphrase for the film and gained moderate recognition in popular culture following the film's release.[22]