Denny's (also seen as Denny's Diner on some of the locations' signage) is a full-service coffee shop/family restaurant chain. It operates over 1,500 restaurants in the United States (including Puerto Rico), Canada, Curaçao, Costa Rica, Honduras, Jamaica, Japan (transliterated as デニーズ Denīzu), Mexico, New Zealand, Qatar, and the United Arab Emirates.

Denny's is known for always being open, serving breakfast, lunch, dinner, and dessert around the clock. Many of their restaurants are located in proximity to freeway exits, bars and in service areas. Unlike many other restaurant chains, Denny's does not close on holidays or nights, except where required by law. Denny's started franchising in 1963. 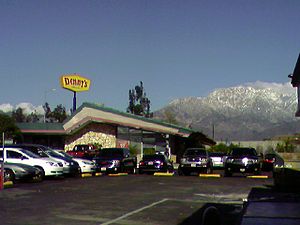 A Denny's Restaurant in Ontario, California. 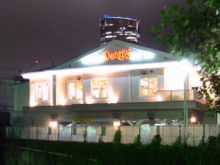 A Denny's restaurant in Tokyo, Japan. 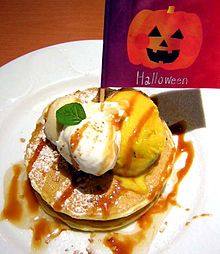 A Halloween pancake at a Denny's restaurant in Tokyo 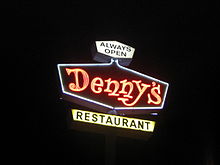 The neon sign of a Denny's in San Clemente, California

Denny's was founded under the name Danny's Donuts in 1953 by Richard Jezak and Harold Butler in Lakewood, California. They expanded to 20 restaurants by 1959, when the chain was renamed Denny's to avoid confusion with another chain, "Doughnut Dan's". The business continued to grow and by 1981, there were over 1,000 restaurants in all 50 U.S. states. In 1977, Denny's introduced the still-popular Grand Slam breakfast. In 1994, Denny's became the largest corporate sponsor of Save the Children, a national charity. All but six Denny's closed for the first time ever on Christmas 1988; many of the restaurants were built without locks, and some which had been reported having lost their keys.[2]

Denny's headquarters were located in Irvine, California, until 1991. At that time, the main office was moved to the Spartanburg, South Carolina, headquarters of the parent company Trans World Corporation (TW Corporation) that acquired Denny's in 1987. In 1992, private equity firm, Kohlberg Kravis Roberts acquired a 47% interest in TW Corporation, later known as The Flagstar Companies, and encouraged the company to sell non-core businesses.[3] Eventually, Denny's operations dominated the parent company to such an extent that The Flagstar Companies changed its name again to Denny's Corporation. It now trades on the NASDAQ under the symbol NASDAQ: DENN. Today, Denny's operates about 1,600 restaurants in all 50 U.S. states, Canada and Mexico. There are also about 578 Denny's restaurants in Japan operated under a license by a subsidiary of Seven & I Holdings and seven Denny's locations in New Zealand. There is a Denny's attached to the Holiday Beach Hotel in Otrabanda, Willemstad, Curaçao in the Netherlands Antilles. Along with the regular Denny's Menu the restaurant also has a selection of local ("kriyoyo") dishes.

For much of its history, Denny's was notable for offering a free meal to anyone on his or her birthday. The offer included a limited number of meal options from a special birthday menu. The promotional ritual ceased in 1993; though occasionally individual franchises will continue the tradition.

In July 2010, Denny's announced plans to expand to the UK market. At the same time, its presence in the United States saw a major expansion when Pilot Flying J started opening Denny's locations inside their Flying J-branded truck stop locations.[4]

In October 2004, Dateline NBC aired a segment titled "Dirty Dining." This segment examined the 10 most popular family and casual dining chains in the United States: Bob Evans, Red Lobster, Waffle House, Chili's, Ruby Tuesday, IHOP, Applebee's, TGI Friday's, Outback Steakhouse, and Denny's. As part of the segment, the producers examined the health inspection records for 100 restaurants over 15 months and totaled all of the critical violations, or violations that can result in adverse effects to the customers' health. Denny's had the fewest violations of the 10 chains evaluated by Dateline and was the only one to average fewer than one violation per restaurant. Denny's attributes this relative success to its adherence to the principles of Hazard Analysis and Critical Control Points.[5]

During the early 1990s, Denny's was involved in a series of discrimination lawsuits involving several cases of servers denying or providing inferior service to racial minorities, especially black customers.[6]

In 1994, Denny's settled a class action lawsuit filed by thousands of black customers who had been refused service, forced to wait longer, or pay more than white customers. The $54.4 million settlement was the largest and broadest under Federal public-accommodations laws established 30 years previously to end segregation in restaurants and public spaces.[7]

After the $54.4 million settlement, Denny's created a racial sensitivity training program for all its employees. Denny's has also made efforts at improving its public relations image by featuring black people in many of its commercials, including one featuring Sherman Hemsley and Isabel Sanford (both actors from the popular The Jeffersons television show).[8][9] In 2001, Denny's was chosen by Fortune magazine as the "Best Company for Minorities."[10][11]

These are some of the most notable incidents involving racial discrimination at Denny's, all occurring after the settlement: 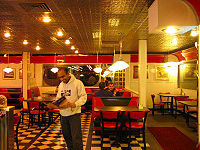 In May 1997, the first Denny's Classic Diner was opened in Fort Myers, Florida. The diner concept was created by the principals of a Denny's Franchisee SWFRI, Inc. The principals were Ron, Marcia, Marc and Todd York. The "diner" is a modular building that resembled 1950s diners. Today there are approximately 38 Denny's diners in the United States. In addition, there are several diners that resemble the modulars but are actually stick construction.

Denny's is currently advertising with the popular website College Humor to create the webseries "Always Open" in which Dave Koechner talks to celebrities in a Denny's restaurant.