A sign, just to the south of the Las Vegas Strip, welcoming visitors to Las Vegas

Signage is any kind of visual graphics created to display information to a particular audience. This is typically manifested in the form of wayfinding information in places such as streets or inside/outside of buildings. 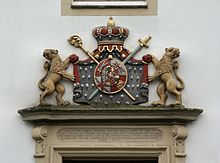 A coat of arms at Castle Borbeck 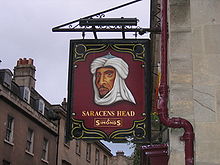 The Saracen's Head: a pub sign in Bath, England 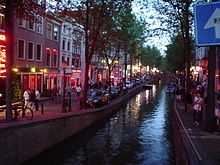 The red-light district in Amsterdam

The French enseigne indicates its essential connection with what is known in English as a flag and in France banners not infrequently took the place of signs or sign boards in the Middle Ages. Signs, however, are best known in the form of painted or carved advertisements for shops, inns, etc. They are one of various emblematic methods used from time immemorial for publicly calling attention to the place to which they refer.

The ancient Egyptians and Romans were known to use signs. In ancient Rome, signboards were usually made from stone or terracotta. and Greeks are known to have used signs, and many Roman examples are preserved, among them the widely-recognized bush to indicate a tavern, from which is derived the proverb "Good wine needs no bush". In some cases, such as the bush, or the three balls of pawnbrokers, certain signs became identified with certain trades and some of these later evolved into trademarks. Other signs can be grouped according to their various origins. Thus, at an early period the cross or other sign of a religious character was used to attract Christians, whereas the sign of the sun or the moon would serve the same purpose for pagans.

In 1389 King Richard III of England compelled landlords to erect signs outside their premises. The legislation stated "Whosoever shall brew ale in the town with intention of selling it must hang out a sign, otherwise he shall forfeit his ale."[citation needed] This was in order make them easily visible to passing inspectors of the quality of the ale they provided (during this period, drinking water was not always good to drink and ale was the usual replacement). Later, the adaptation of the coats of arms or badges of noble families became common. These would be described by the people without consideration of the language of heraldry, and thus such signs as the Red Lion, the Green Dragon, etc., have become familiar, especially as pub signs.

Large towns where many practiced the same trade, and especially, as was often the case, where these congregated mainly in the same street, simple signs of a trade signs did not provide sufficient distinction. Thus a variety of devices came into existence; sometimes the trader used a rebus on his own name (e.g. two cocks for the name of Cox); sometimes he adopted a figure of an animal or other object, or portrait of a well-known person, which he considered likely to attract attention. Other signs used the common association of two heterogeneous objects, which (apart from those representing a rebus) were in some cases merely a whimsical combination, but in others arose from a popular misconception of the sign itself (e.g. the combination of the leg and star may have originated in a representation of the insignia of the garter), or from corruption in popular speech (e.g. the combination goat and compasses is said by some to be a corruption of God encompasses).

Whereas the use of signs was generally optional, publicans were on a different footing from other traders in this respect. As early as the 14th century there was a law in England compelling them to exhibit signs, for in 1393 the prosecution of a publican for not doing so is recorded. In France edicts were directed to the same end in 1567 and 1577.

Since the object of sign boards was to attract the public, they were often of an elaborate character. Not only were the signs themselves large and sometimes of great artistic merit (especially in the 16th and 17th centuries, when they reached their greatest vogue) but the posts or metal supports protruding from the houses over the street, from which the signs were swung, were often elaborately worked, and many beautiful examples of wrought-iron supports survive both in England and continental Europe.

The signs were a prominent feature of the streets of London at this period. But here and in other large towns they became a danger and a nuisance in the narrow ways. Already in 1669 a royal order had been directed in France against the excessive size of sign boards and their projection too far over the streets. In Paris in 1761 and in London about 1762-1773, laws were introduced which gradually compelled sign boards to be removed or fixed flat against the wall.

For the most part they only survived in connection with inns, for which some of the greatest artists of the time painted sign boards, usually representing the name of the inn. With the gradual abolition of sign boards, the numbering of houses began to be introduced in the early 18th century in London. It had been attempted in Paris as early as 1512, and had become almost universal by the close of the 18th century, though not enforced until 1805. Another important factor was that during the Middle Ages a large percentage of the population would have been illiterate and so pictures were more useful than words as a means of identifying a public house. For this reason there was often no reason to write the establishment's name on the sign and inns opened without a formal written name—the name being derived later from the illustration on the public house's sign. In this sense, a pub sign can be thought of as an early example of visual branding.

During the 19th century, some artists specialized in the painting of signboards, such as the Austro-Hungarian artist Demeter Laccataris. Pending this development, houses which carried on trade at night (e.g. coffee houses, brothels, etc.) had various specific arrangements of lights, and these still survive to some extent, as in the case of doctors dispensaries and chemists shops.

Currently, with a 100+ year history, the best known sign in the world[citation needed] is located at One Times Square, New York City and has been featured in countless movies and is the site for the famous New Year's Eve balloon-drop ceremonies. The home of the modern news zipper.

In signage a pictogram is the image used to convey the message of the sign. In statutory signage pictograms follow a very specific set of colour, shape and sizing rules. In UK and EU signs the width of a sign's pictogram is set at 80% the height of the area it is printed to. In the US, a pictogram that identifies a room or space (such as the gender pictogram on a restroom signs), must follow specific rules. Other pictograms that must comply with rules are the four "Symbols of Accessibility" specified in the ADA Accessibility Guidelines. See the article *ADA Signs.

In the US, the pictogram described above would have to be located within a 6-inch-high (150 mm) clear field, with raised characters and braille located beneath the field.

For a pictogram to work it must be instantly recognizable and understood by all. For this to work the image must be kept consistent. In its purest form a pictogram on a sign should be understood even if there is no text present. Following the standard color and shape rules increase the likelihood of a universally understood pictogram and therefore sign.

The main purpose of signage is communication, to convey information such that its receiver can make cognitive decisions based on the information provided. In general, signage can be classified into the following functions: 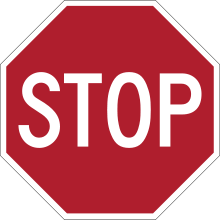 Stop sign used in English-speaking countries, as well as in the European Union

Signs have very specific shapes. These shapes on signs send messages to the audience and form a set of rules that should be followed when developing signage. The particular shapes may vary among different parts of the world.

In contrast, a circular sign is an instruction that must be followed. Both the mandatory and the prohibition signs provide instructions that cannot be ignored. WDWQD Finally, there is the triangle or the warning sign. This is used to convey danger. It can also provide information but its primary purpose it to quickly tell you to be aware and careful.

Neon signs, introduced at the 1910 Paris Expo, are produced by the craft of bending glass tubing into shapes. A worker skilled in this craft is known as a glass bender, neon or tube bender.