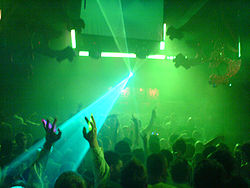 A nightclub (also known as a discothèque, or simply a club or disco) is an entertainment venue which usually operates late into the night. A nightclub is generally distinguished from bars, pubs or taverns by the inclusion of a dance floor and a DJ booth, where a DJ plays recorded dance, hip hop, rock, reggae, dubstep and pop music.

The music in nightclubs is either live bands or, more commonly, a mix of songs played by a DJ through a powerful PA system. Most clubs or club nights cater to certain music genres, such as techno, house music, trance, heavy metal, garage, hip hop, salsa, dancehall, Drum and Bass, Dubstep or soca music. Many clubs also promote playing the Top 40 which has most of the night playing the most broadcast songs of the previous week.

Many nightclubs choose who can enter, on bases other than just age, e.g. dress code and guest list. This is used to make their status as a nightclub more "exclusive". Quite often, there are no clear policies governing entry to a nightclub, thereby allowing the doormen to deny entry to anybody at their discretion.

In most cases, entering a nightclub requires a flat fee called a cover charge. Early arrivers and women may have their cover charge waived or reduced (in the United Kingdom, this latter option is illegal under the Equality Act 2010[1] but the law is rarely enforced and open violations are frequent). Friends of the doorman or the club owner may gain free entrance. Sometimes, especially at larger clubs in continental European countries, one only gets a pay card at the entrance, on which all money spent in the discothèque (often including the entrance fee) is marked. Sometimes, entrance fee and cloakroom costs are paid by cash and only the drinks in the club are paid using a pay card. 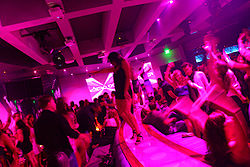 Clubgoers dancing at an upscale nightclub

Many nightclubs operate a "guestlist" that allows certain attendees to enter the club for free, or at a reduced rate. Some nightclubs have a range of unpublished guestlist options ranging from free, to reduced, to full price with line by-pass privileges only. Nightclub goers that are on the guestlist usually have a separate queue and possibly a separate entrance to the one used by full price paying attendees. It is common for the guestlist line-up to be as long or longer than the full-paying or ticketed queues. Some nightclubs allow clubbers to register for the guestlist through their websites. 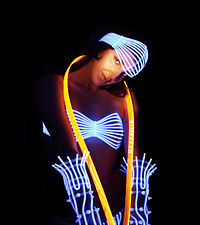 Many nightclubs enforce a dress code in order to ensure a certain type of clientele is in attendance at the venue. Some upscale nightclubs ban attendees from wearing trainers or jeans, while other nightclubs will advertise a vague "dress to impress" dress code that allows the bouncers to discriminate at will against those vying for entry to the club. Many exceptions are made to nightclub dress codes, with denied entry usually reserved for the most glaring rule breakers or those thought to be unsuitable for the party. Certain nightclubs like fetish nightclubs may apply a leather-only, rubber-only or fantasy dress code. The dress code criterion is often an excuse for discriminatory practices, such as in the case of Carpenter v. Limelight Entertainment Ltd.[2]

Many nightclubs will only allow entry by association. A number of gay nightclubs that prefer to cater to an exclusively male clientele will deny entry to a group of lesbians but will welcome a lesbian with a number of gay friends.

"The Cave" in the basement of the Gruenwald (later Roosevelt) Hotel, New Orleans opened in 1912; said by some to be the first "nightclub" in the United States

From about 1900 to 1920, working class Americans would gather at honky tonks or juke joints to dance to music played on a piano or a jukebox.

During US Prohibition, nightclubs went underground as illegal speakeasy bars. With the repeal of Prohibition in February 1933, nightclubs were revived, such as New York's Stork Club, 21 Club, El Morocco and the Copacabana. These nightclubs featured big bands (there were no DJ's).

In Occupied France, jazz and bebop music, and the jitterbug dance were banned by the Nazis as decadent American influences, so members of the French underground met at hidden underground basement dance clubs called discotheques where they danced to American swing music, which a DJ played on a single turntable when a jukebox was not available. These "discotheques" were also patronized by anti-Vichy youth called zazous. There were also underground discotheques in Nazi Germany patronized by anti-Nazi youth called the swing kids.

In Harlem, the Cotton Club and Connie's Inn were popular venues for white audiences. Before 1953 and even some years thereafter, most bars and nightclubs used a jukebox or mostly live bands. In Paris, at a club named "Whisky à Gogo", founded in 1947,[3] Régine in 1953 laid down a dance-floor, suspended coloured lights and replaced the juke-box with two turntables which she operated herself so there would be no breaks between the music. The Whisky à Gogo set into place the standard elements of the modern post World War II discothèque-style nightclub. In the early 1960s, Mark Birley opened a members-only discothèque nightclub, Annabel's, in Berkeley Square, London. In 1962, the Peppermint Lounge in New York City became popular and is the place where go-go dancing originated. However, the first rock and roll generation preferred rough and tumble bars and taverns to nightclubs, and the nightclub did not attain mainstream popularity until the 1970s disco era.

By the late 1970s many major US cities had thriving disco club scenes which were centered around discothèques, nightclubs, and private loft parties where DJs would play disco hits through powerful PA systems for the dancers. The DJs played "... a smooth mix of long single records to keep people 'dancing all night long'"[4] Some of the most prestigious clubs had elaborate lighting systems that throbbed to the beat of the music.

Some cities had disco dance instructors or dance schools which taught people how to do popular disco dances such as "touch dancing", the "hustle" and the "cha-cha-cha". There were also disco fashions that discothèque-goers wore for nights out at their local disco, such as sheer, flowing Halston dresses for women and shiny polyester Qiana shirts for men. Disco clubs and "...hedonistic loft parties" had a club culture which had many Italian-American, African American, gay[5] and Hispanic people.

In addition to the dance and fashion aspects of the disco club scene, there was also a thriving drug subculture, particularly for recreational drugs that would enhance the experience of dancing to the loud music and the flashing lights, such as cocaine[6] (nicknamed "blow"), amyl nitrite "poppers",[7] and the "...other quintessential 1970s club drug Quaalude, which suspended motor coordination and turned one's arms and legs to Jell-O".[8] The "massive quantities of drugs ingested in discothèques by newly liberated gay men produced the next cultural phenomenon of the disco era: rampant promiscuity and public sex. While the dance floor was the central arena of seduction, actual sex usually took place in the nether regions of the disco: bathroom stalls, exit stairwells, and so on. In other cases the disco became a kind of "main course" in a hedonist's menu for a night out."[8]

Famous 1970s discothèques included "...cocaine-filled celeb hangouts such as Manhattan's "Studio 54", which was operated by Steve Rubell and Ian Schrager. Studio 54 was notorious for the hedonism that went on within; the balconies were known for sexual encounters, and drug use was rampant. Its dance floor was decorated with an image of the "Man in the Moon" that included an animated cocaine spoon. Other famous 1970s discothèques in New York City included "Xenon", "The Loft", the "Paradise Garage", and "Aux Puces", one of the first gay disco bars. In San Francisco, there was the Trocadero Transfer, the I-Beam, and the End Up.

By the early 1980s, the term "disco" had largely fallen out of favour in most of the English-speaking world.

During the 1980s, during the New Romantic movement, London had a vibrant nightclub scene, which included clubs like The Blitz, the Batcave, the Camden Palace and Club for Heroes. Both music and fashion embraced the aesthetics of the movement. Bands included Depeche Mode, The Human League, Duran Duran, Blondie, Eurythmics and Ultravox. Reggae-influenced bands included Boy George and Culture Club, and electronic vibe bands included Visage. At London nightclubs, young men would often wear make-up and young women would wear men's suits.

Significant New York nightclubs of the period were Area, Danceteria, and The Limelight.[9] 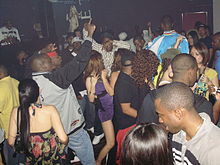 A dance club in Okinawa, Japan. 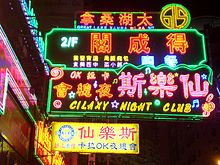 In Europe and North America, nightclubs play disco-influenced dance music such as house music, techno, and other dance music styles such as electronica and trance. Most nightclubs in the U.S. major cities play hip hop, house and trance music. These clubs are generally the largest and most frequented of all of the different types of clubs. The emergence of the "superclub" created a global phenomenon, with Ministry of Sound (London), Cream (Liverpool) and Pacha (Ibiza).

In most other languages, nightclubs are referred to as "discos" or "discothèques" (French: discothèque; Italian and Spanish: discoteca, antro (common in Mexico only), and "boliche" (common in Argentina only), "discos" is commonly used in all others in Latinamerica; German: Disko or Diskothek). In Japanese ディスコ, disuko refers to an older, smaller, less fashionable venue; while クラブ, kurabu refers to a more recent, larger, more popular venue. The term night is used to refer to an evening focusing on a specific genre, such as "retro music night" or a "singles night."

A recent trend in the North American and European nightclub industry is the usage of video. Instead of audio-only, DJ's are now using video and "mixing" music videos and related songs together in an audio/visual presentation.