Dance is an art form that generally refers to movement of the body, usually rhythmic and to music,[1] used as a form of expression, social interaction or presented in a spiritual or performance setting.

Dance may also be regarded as a form of nonverbal communication between humans, and is also performed by other animals (bee dance, patterns of behaviour such as a mating dance). Gymnastics, figure skating and synchronized swimming are sports that incorporate dance, while martial arts kata are often compared to dances. Motion in ordinarily inanimate objects may also be described as dances (the leaves danced in the wind).

Dancing has evolved many styles. Breakdancing and Krumping are related to the hip hop culture. African dance is interpretative. Ballet, Ballroom, Waltz, and Tango are classical styles of dance while Square Dance and the Electric Slide are forms of step dances.

Every dance, no matter what style, has something in common. It not only involves flexibility and body movement, but also physics. If the proper physics are not taken into consideration, injuries may occur.

Choreography is the art of creating dances. The person who creates (i.e., choreographs) a dance is known as the choreographer.

Origins and history of dance

Dance does not leave behind clearly identifiable physical artifacts such as stone tools, hunting implements or cave paintings. It is not possible to say when dance became part of human culture.

Joseph Jordania recently suggested, that dance, together with rhythmic music and body painting, was designed by the forces of natural selection at the early stage of hominid evolution as a potent tool to put groups of human ancestors in a battle trance, a specific altered state of consciousness. In this state hominids were losing their individual identity and were acquiring collective identity.[2] Jonathan Pieslak's research shows, that some contemporary military units use loud group singing and dancing in order to prepare themselves for the dangerous combat missions.[3] According to Jordania, this trance-inducing ability of dance comes from human evolutionary past and includes as well a phenomenon of military drill[4] which is also based on shared rhythmic and monotonous group activity.

Dance has certainly been an important part of ceremony, rituals, celebrations and entertainment since before the birth of the earliest human civilizations. Archeology delivers traces of dance from prehistoric times such as the 9,000 year old Rock Shelters of Bhimbetka paintings in India and Egyptian tomb paintings depicting dancing figures from c. 3300 BC.

One of the earliest structured uses of dances may have been in the performance and in the telling of myths. It was also sometimes used to show feelings for one of the opposite gender. It is also linked to the origin of "love making." Before the production of written languages, dance was one of the methods of passing these stories down from generation to generation.[5]

Another early use of dance may have been as a precursor to ecstatic trance states in healing rituals. Dance is still used for this purpose by many cultures from the Brazilian rainforest to the Kalahari Desert.[6]

Sri Lankan dances goes back to the mythological times of aboriginal yingyang twins and "yakkas" (devils). According to a Sinhalese legend, Kandyan dances originated 250 years ago, from a magic ritual that broke the spell on a bewitched king. Many contemporary dance forms can be traced back to historical, traditional, ceremonial, and ethnic dance.

Many early forms of music and dance were created and performed together. This paired development has continued through the ages with dance/music forms such as: jig, waltz, tango, disco, salsa, electronica and hip-hop. Some musical genres have a parallel dance form such as baroque music and baroque dance; others, such as classical music and classical ballet, developed separately.

Although dance is often accompanied by music, it can also be presented independently or provide its own accompaniment (tap dance). Dance presented with music may or may not be performed in time to the music depending on the style of dance. Dance performed without music is said to be danced to its own rhythm[citation needed]. 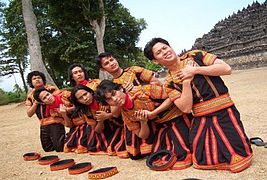 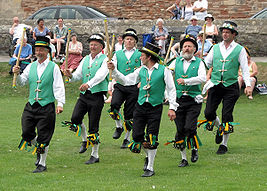 Morris dancing in the grounds of Wells Cathedral, Wells, England 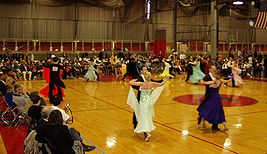 An amateur dancesport competition at MIT 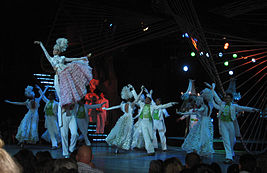 Professional dancers at the Tropicana Club, Havana, Cuba, in 2008

In the early 1920s, dance studies (dance practice, critical theory, Musical analysis and history) began to be considered an academic discipline. Today these studies are an integral part of many universities' arts and humanities programs. By the late 20th century the recognition of practical knowledge as equal to academic knowledge lead to the emergence of practice research and practice as research. A large range of dance courses are available including:

Academic degrees are available from BA (Hons) to PhD and other postdoctoral fellowships, with some dance scholars taking up their studies as mature students after a professional dance career.

Today, there are various dances and dance show competitions on television and the Internet.

Dance training differs depending on the dance form. There are university programs and schools associated with professional dance companies for specialised training in classical dance (e.g. Ballet) and modern dance. There are also smaller, privately owned dance studios where students may train in a variety of dance forms including competitive dance forms (e.g. Latin dance, ballroom dance, etc.) as well as ethnic/traditional dance forms.

In the U.S. many professional dancers are members of unions such as the American Guild of Musical Artists, the Screen Actors Guild and Actors' Equity Association. The unions help determine working conditions and minimum salaries for their members.

Dance teacher and operators of dance schools rely on reputation and marketing. For dance forms without an association structure such as Salsa or Tango Argentino they may not have formal training. Most dance teachers are self employed.

Dancesport coaches are tournament dancers or former dancesports people, and may be recognised by a dance sport federation.

Choreographers are generally university trained and are typically employed for particular projects or, more rarely may work on contract as the resident choreographer for a specific dance company. A choreographic work is protected intellectual property. Dancers may undertake their own choreography.

Dance by ethnicity or region 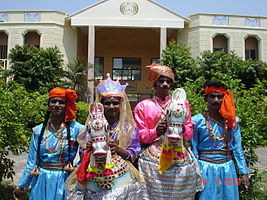 During the first millennium BCE in India, many texts were composed which attempted to codify aspects of daily life. In the matter of dance, Bharata Muni's Natyashastra (literally "the text of dramaturgy") is one of the earlier texts. Though the main theme of Natyashastra deals with drama, dance is also widely featured, and indeed the two concepts have ever since been linked in Indian culture. The text elaborates various hand-gestures or mudras and classifies movements of the various limbs of the body, gait, and so on. The Natyashastra categorised dance into four groups and into four regional varieties, naming the groups: secular, ritual, abstract, and, interpretive. However, concepts of regional geography has altered and so have regional varieties of Indian dances. Dances like "Odra Magadhi", which after decades long debate, has been traced to present day Mithila-Orissa region's dance form of Odissi, indicate influence of dances in cultural interactions between different regions.[7]

From these beginnings rose the various classical styles which are recognised today. Therefore, all Indian classical dances are to varying degrees rooted in the Natyashastra and therefore share common features: for example, the mudras, some body positions, and the inclusion of dramatic or expressive acting or abhinaya. The Indian classical music tradition provides the accompaniment for the dance, and as percussion is such an integral part of the tradition, the dancers of nearly all the styles wear bells around their ankles to counterpoint and complement the percussion.

Bhangra in the Punjab

The Punjab area overlapping India and Pakistan is the place of origin of Bhangra. It is widely known both as a style of music and a dance. It is mostly related to ancient harvest celebrations, love, patriotism or social issues. Its music is coordinated by a musical instrument called the 'Dhol'. Bhangra is not just music but a dance, a celebration of the harvest where people beat the dhol (drum), sing Boliyaan (lyrics) and dance.It developed further with the Vaisakhi festival of the Sikhs.

The devil dances of Sri Lanka or "yakun natima" are a carefully crafted ritual with a history reaching far back into Sri Lanka's pre-Buddhist past. It combines ancient "Ayurvedic" concepts of disease causation with psychological manipulation. The dance combines many aspects including Sinhalese cosmology, the dances also has an impact on the classical dances of Sri Lanka.[8] 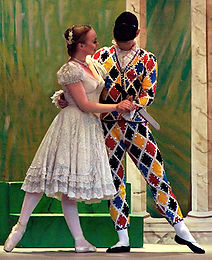 Harlequin and Columbine from the mime theater at Tivoli Gardens, Copenhagen, Denmark

In Europe and North America

Ballet developed first in Italy and then in France from lavish court spectacles that combined music, drama, poetry, song, costumes and dance. Members of the court nobility took part as performers. During the reign of Louis XIV, himself a dancer, dance became more codified. Professional dancers began to take the place of court amateurs, and ballet masters were licensed by the French government. The first ballet dance academy was the Académie Royale de Danse (Royal Dance Academy), opened in Paris in 1661. Shortly thereafter, the first institutionalized ballet troupe, associated with the Academy, was formed; this troupe began as an all-male ensemble but by 1681 opened to include women as well.[5] 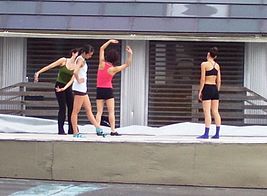 At the beginning of the 20th century, there was an explosion of innovation in dance style characterized by an exploration of freer technique. Early pioneers of what became known as modern dance include Loie Fuller, Isadora Duncan, Mary Wigman and Ruth St. Denis. The relationship of music to dance serves as the basis for Eurhythmics, devised by Emile Jaques-Dalcroze, which was influential to the development of Modern dance and modern ballet through artists such as Marie Rambert. Eurythmy, developed by Rudolf Steiner and Marie Steiner-von Sivers, combines formal elements reminiscent of traditional dance with the new freer style, and introduced a complex new vocabulary to dance. In the 1920s, important founders of the new style such as Martha Graham and Doris Humphrey began their work. Since this time, a wide variety of dance styles have been developed; see Modern dance.

The influence of African American dance

African American dances are those dances which have developed within African American communities in everyday spaces, rather than in dance studios, schools or companies and its derivatives, tap dance, disco, jazz dance, swing dance, hip hop dance and breakdance. Other dances, such as the lindy hop with its relationship to rock and roll music and rock and roll dance have also had a global influence.

Main articles: Outline of dance and Index of dance articles

Synonyms:
Measured movement, figured and rhythmic motion, "poetry of motion." / Step rhythmically, move to music, take part in a dance / Frisk, caper, hop about, Dandle, toss up and down