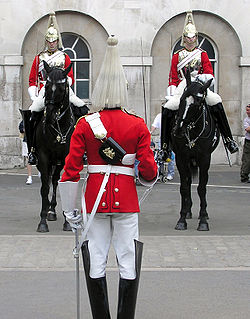 Part of the ceremony of the Changing of the Guard in Whitehall, London.

A ritual is a set of actions, performed mainly for their symbolic value. It may be prescribed by a religion or by the traditions of a community. The term usually excludes actions which are arbitrarily chosen by the performers.

The field of ritual studies has seen a number of conflicting definitions of the term. One given by Kyriakidis (2007) is that Ritual is an outsider's or "etic" category for a set activity (or set of actions) which to the outsider seems irrational, non-contiguous, or illogical. The term can be used also by the insider or "emic" performer as an acknowledgement that this activity can be seen as such by the uninitiated onlooker.

A ritual may be performed on specific occasions, or at the discretion of individuals or communities. It may be performed by a single individual, by a group, or by the entire community; in arbitrary places, or in places especially reserved for it; either in public, in private, or before specific people. A ritual may be restricted to a certain subset of the community, and may enable or underscore the passage between religious or social states.

The purposes of rituals are varied; with religious obligations or ideals, satisfaction of spiritual or emotional needs of the practitioners, strengthening of social bonds, social and moral education, demonstration of respect or submission, stating one's affiliation, obtaining social acceptance or approval for some event—or, sometimes, just for the pleasure of the ritual itself.

Rituals of various kinds are a feature of almost all known human societies, past or present. They include not only the various worship rites and sacraments of organized religions and cults, but also the rites of passage of certain societies, atonement and purification rites, oaths of allegiance, dedication ceremonies, coronations and presidential inaugurations, marriages and funerals, school "rush" traditions and graduations, club meetings, sports events, Halloween parties, veterans parades, Christmas shopping and more. Many activities that are ostensibly performed for concrete purposes, such as jury trials, execution of criminals, and scientific symposia, are loaded with purely symbolic actions prescribed by regulations or tradition, and thus partly ritualistic in nature. Even common actions like hand-shaking and saying hello may be termed rituals.

In psychology, the term ritual is sometimes used in a technical sense for a repetitive behavior systematically used by a person to neutralize or prevent anxiety; it is a symptom of obsessive–compulsive disorder.

Ritual actions are not characteristic of human cultures only. Many animal species use ritualized actions to court or to greet each other, or to fight. At least some ritualized actions have very strong selective purpose in animals. For example, ritualized fights are extremely important to avoid unnecessary strong physical violence between the conflicting animals.

According to Joseph Jordania, the initial function of ritualistic behaviors in human evolutionary prehistory was to achieve the altered state of consciousness in hominid brain, in order to transform individual hominids into a group of dedicated individuals with a single collective identity. In this state (which Jordania calls battle trance) hominids did not feel fear and pain, they were religiously dedicated to group interests, were not questioning orders, and could sacrifice their lives for the common goal[1]. This state was induced by ritualistic actions: loud rhythmic singing, clapping and drumming on external objects, dancing, body and face painting, and the use of specific cloths. The same kind of ritualistic actions are still widely used in order to achieve the psychological unity of participants in various religious practices, as well in military forces to prepare soldiers for the combat situations[2][3]

There are hardly any limits to the kind of actions that may be incorporated into a ritual. The rites of past and present societies have typically involved special gestures and words, recitation of fixed texts, performance of special music, songs or dances, processions, manipulation of certain objects, use of special dresses, consumption of special food, drink, or drugs, and much more. Religious rituals have also included animal sacrifice, human sacrifice, and ritual suicide. Ritual lamentation—song performed with weeping—in many societies was regarded as required to ritually carry the departed soul to a safe afterlife (Tolbert 1990a, 1990b; Wilce 2006).

In religion, a ritual can comprise the prescribed outward forms of performing the cultus, or cult, of a particular observation within a religion or religious denomination. Although ritual is often used in context with worship performed in a church, the actual relationship between any religion's doctrine and its ritual(s) can vary considerably from organized religion to non-institutionalized spirituality, such as ayahuasca shamanism as practiced by the Urarina of the upper Amazon.[4] Rituals often have a close connection with reverence, thus a ritual in many cases expresses reverence for a deity or idealized state of humanity.

The social function of rituals has often been exploited for political ends. Alongside the personal dimensions of worship and reverence, rituals can have a more basic social function in expressing, fixing and reinforcing the shared values and beliefs of a society.

Social rituals have formed a part of human culture for tens of thousands of years. The earliest known undisputed evidence of burial rituals dates from the Upper Paleolithic. Older skeletons show no signs of deliberate "burial," and as such lack clear evidence of having been ritually treated. Anthropologists see social rituals as one of many cultural universals.

Rituals can aid in creating a firm sense of group identity. Humans have used rituals to create social bonds and even to nourish interpersonal relationships. For example, nearly all fraternities and sororities have rituals incorporated into their structure, from elaborate and sometimes "secret" initiation rites, to the formalized structure of convening a meeting. Thus, numerous aspects of ritual and ritualistic proceedings are engrained into the workings of those societies.

Of particular interest to anthropologists has been the role of ritual in structuring life crises, human development, religious enactment and entertainment.

Among anthropologists, and other ethnographers, who have contributed to ritual theory are Victor Turner, Ronald Grimes, Mary Douglas, and the biogenetic structuralists. Anthropologists from Émile Durkheim through Turner and contemporary theorists like Michael Silverstein (2004) treat ritual as social action aimed at particular transformations often conceived in cosmic terms. Though the transformations can also be thought of as personal (e.g. the fertility and healing rituals Turner describes), they become a sort of cosmic event, one stretching into "eternity."