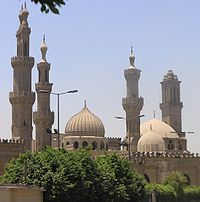 The Al-Azhar University in Cairo, Egypt, is the chief centre of Sunni Islamic learning in the world.

Sunni Islam is sometimes referred to as the orthodox version of the religion.[3] The word "Sunni" comes from the term Sunnah (Arabic: سنة‎), which refers to the sayings and actions of Muhammad that are recorded in hadiths (collections of narrations regarding Muhammad).[4] Sunni Muslims generally consider Sahih al-Bukhari and Sahih Muslim to be entirely authentic and accurate hadiths.

Sunnī (Classical Arabic: سُنِّي‎ /ˈsunniː/) is a broad term derived from sunnah (سُنَّة‎ /ˈsunna/, pl. سُنَن‎ sunan /ˈsunæn/), means "habit" or "usual practice".[5] The Muslim usage of this term refers to the sayings and living habits of Muhammad. In its full form, this branch of Islam is referred to as "Ahlu s-Sunnah Wa Al-Jama'ah" (literally, "People of the Tradition and the Congregation"). Anyone claiming to follow the Sunnah who can demonstrate that they have no action or belief against the Prophetic Sunnah can consider themself to be a Sunni Muslim. However, it should be noted that Shi'a Muslims also hold that they follow the Sunnah.

Islamic law is known as the Sharī'ah. The Sharī'ah is based on the Qur'an and the Sunnah. The Madh'hab translates to "way", and different Madhaheb (plural of Madh'hab) reflect different opinions on some laws and obligations of the sharia, for example when one Madh'hab sees a certain act as an obligation, while the other does not. It has to be clear that each one of these schools consider the others to be fully valid and accepted.

Below are the most famous four:

Abu Hanifah (died 767), was the founder of the Hanafi school and student of Ja'far al-Sadiq. He was born in the year 702 CE in Kufa, Iraq[6][7] in an Afghan-Persian family.[citation needed] Muslims of Bangladesh, Pakistan, India, Afghanistan, Central Asia, the Muslim areas of Southern Russia, the Caucasus, most of the Muslim areas of the Balkans and Turkey and parts of Iraq, all follow this school of jurisprudence.

Malik ibn Anas (died 795) Student of the imam Abu Hanifah's eldest student, Muhammad, Malik ibn Anas developed his ideas in Medina. His doctrine is recorded in the Muwatta which has been adopted by most North African and West African countries like Tunisia, Morocco, Algeria, Libya, Mali, Nigeria and others except Egypt, Horn of Africa and Sudan. Also, the Maliki madhab is the official state madhhab of Kuwait, Bahrain and the United Arab Emirates. He was one of the teachers of Imam al-Shafi'i. One of greatest historical centers of Maliki teaching, especially during the ninth, tenth and eleventh centuries, is the Mosque of Uqba also known as the Great Mosque of Kairouan (in Tunisia).[8][9]

Muhammad ibn Idris ash-Shafi`i (died 820 CE) was a student of Malik. He taught in Iraq and then in Egypt. Muslims in Indonesia, Lower Egypt, Malaysia, Southern Philippines, Brunei, Singapore, Somalia, Kenya, Tanzania, Jordan, Lebanon, Syria, Coastal Maharashtra/Konkan and Kerala in India, Sri Lanka, Maldives, Palestine, Yemen and Kurds in the Kurdish regions follow the Shafi'i school. Al-Shafi'i placed great emphasis on the Sunnah of Muhammad, as embodied in the Hadith, as a source of the Shari'ah.

Ahmad bin Hanbal (died 855), the namesake of the Hanbali school, was born in Baghdad. He learned extensively from al-Shafi'i. This school of jurisprudence is followed predominantly in the Arabian Peninsula.

The followers of these four schools follow the same basic belief system but differ from one another in terms of practice and execution of rituals, and in juristic interpretation of "divine principles" (or Shariah) as envisaged in Quran and Hadith. However Sunni Muslims consider them all equally valid.

There are other Sunni schools of law. However, many are followed by only small numbers of people and are relatively unknown due to the popularity of the four major schools; also, many have died out or were not sufficiently recorded by their followers to survive.

Interpreting the Shari'ah to derive specific rulings (such as how to pray) is known as fiqh, which literally means understanding. A madh'hab is a particular tradition of interpreting fiqh. These schools focus on specific evidence (Shafi'i and Hanbali) or general principles (Hanafi and Maliki) derived from specific evidences. The schools were started by eminent Muslim scholars in the first four centuries of Islam. As these schools represent clearly spelled out methodologies for interpreting the Shari'aa, there has been little change in the methodology per se. However, as the social and economic environment changes, new fiqh rulings are being made. For example, when tobacco appeared it was declared as 'disliked' because of its smell. When medical information showed that smoking was dangerous, that ruling was changed to 'forbidden'. Current fiqh issues include things like downloading pirated software and cloning. The consensus is that the Shari'ah does not change but fiqh rulings change all the time.

A madh'hab is not to be confused with a religious sect. There may be scholars representing all four madh'habs living in larger Muslim communities, and it is up to those who consult them to decide which school they prefer.

Distribution of Sunni, Shia and Ibadi branches of Islam

Estimates of the world Sunni population varies from 75% to 90% of all muslims.[10][11] The remaining belong to various other denominations.[1][12]

Some Islamic scholars faced questions that they felt were not explicitly answered in the Qur'an, especially questions with regard to philosophical conundra like the nature of God, the existence of human free will, or the eternal existence of the Qur'an. Various schools of theology and philosophy developed to answer these questions, each claiming to be true to the Qur'an and the Muslim tradition (sunnah). Among Sunnites, the following were the dominant traditions:

Due to the emphasis of the Hanbali school of thought on textualism, Muslims who are Hanbali usually prefer the Athari methodology in Aqidah. However, Atharis are not exclusively Hanbali, many Muslims from other schools of thought adhere to the Athari school of Aqidah also.

The Atharis are also called sometimes the Salafis. And their theological system of Aqidah is most of the time called Aqidat al-Salaf (or in fewer occasions: Aqidat As-hab al-Hadith).

The Qur'an as it exists today in book form was compiled by Muhammad's companions (Sahaba) in approximately 650 CE, and is accepted by all Muslim denominations. However, there were many matters of belief and daily life that were not directly prescribed in the Qur'an, but were actions that were observed by Muhammad and the early Muslim community. Later generations sought out oral traditions regarding the early history of Islam, and the practices of Muhammad and his first followers, and wrote them down so that they might be preserved. These recorded oral traditions are called hadith. Muslim scholars have through the ages sifted through the hadith and evaluated the chain of narrations of each tradition, scrutinizing the trustworthiness of the narrators and judging the strength of each hadith accordingly.

Most Sunni Muslims accept the hadith collections of Bukhari and Muslim as the most authentic (sahih, or correct), and while accepting all hadiths verified as authentic, grant a slightly lesser status to the collections of other recorders. There are, however, four other collections of hadith that are also held in particular reverence by Sunni Muslims, making a total of six:

There are also other collections of hadith which also contain many authentic hadith and are frequently used by scholars and specialists. Examples of these collections include: