Iraqi Kurdistan first gained autonomous status in 1970 agreement with the Iraqi government and its status was re-confirmed as an autonomous entity within the federal Iraqi republic in 2005.[16] There is also a province by the name Kurdistan in Iran, although it does not enjoy self-rule.

Some Kurdish nationalist organizations seek to create an independent nation state of Kurdistan, consisting of some or all of the areas with Kurdish majority, while others campaign for greater Kurdish autonomy within the existing national boundaries.[17][18]

Various groups, among them the Guti, Hurrian , Mannai (Mannaeans), and Armenians had lived in this region in antiquity[19] The original Mannaean homeland was situated east and south of the Lake Urmia, roughly centered around modern-day Mahabad.[20] The Medes came under Persian rule during the reign of Cyrus the Great and Darius.

The Kingdom of Corduene, which emerged from the declining Seleucid Empire, was located to the south and south-east of Lake Van between Persia and Mesopotamia and ruled northern Mesopotamia and southeastern Anatolia from 189 BC to AD 384. At its zenith, the Roman Empire ruled large Kurdish-inhabited areas, particularly the western and northern Kurdish areas in the Middle East. Corduene became a vassal state of the Roman Republic in 66 BC and remained allied with the Romans until AD 384. Corduene was situated to the east of Tigranocerta, that is, to the east and south of present-day Diyarbakır in south-eastern Turkey.

Ancient Kurdistan as Kard-uchi, during Alexander the Great's Empire, 4th century BC

Some historians have correlated a connection between Corduene‎ with the modern names of Kurds and Kurdistan;[7][21][22] T. A. Sinclair dismissed this identification as false,[23] while a common association is asserted in the Columbia Encyclopedia.[24]

Some of the ancient districts of Kurdistan and their corresponding modern names:[25]

19th-century map showing the location of the Kingdom of Corduene in 60 B.C

One of the earliest records of the phrase land of the Kurds is found in a Syriac Christian document of late antiquity, describing the stories of Christian saints of the Middle East, such as the Abdisho. When the Sassanid Marzban asked Mar Abdisho about his place of origin, he replied that according to his parents, they were originally from Hazza, a village in Assyria. However they were later driven out of Hazza by pagans, and settled in Tamanon, which according to Abdisho was in the land of the Kurds. Tamanon lies just north of the modern Iraq-Turkey border, while Hazza is 12 km southwest of modern Irbil. In another passage in the same document, the region of the Khabur River is also identified as land of the Kurds.[26] 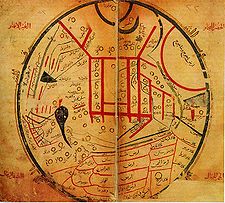 In tenth and eleventh centuries, several Kurdish principalities emerged in the region: in the North the Shaddadid (951–1174) (in east Transcaucasia between the Kur and Araxes rivers) and the Rawadid (955–1221) (centered in Tabriz and ruled all of Azarbaijan), in the East the Hasanwayhid (959–1015) (in Zagros between Shahrizor and Khuzistan) and the Annazid (990–1116) (centered in Hulwan) and in the West the Marwanid (990–1096) in south of Diyarbakır and north of Jazira.[27][28]

Kurdistan in the Middle Ages was a collection of semi-independent and independent states called "emirates". It was nominally under indirect political or religious influence of Khalifs or Shahs. A comprehensive history of these states and their relationship with their neighbors is given in the text of "Sharafnama", written by Prince Sharaf al-Din Bitlisi in 1597.[29][30] The emirates included Baban, Soran, Badinan and Garmiyan in present-day Iraq; Bakran, Bohtan (or Botan) and Badlis in Turkey, and Mukriyan and Ardalan in Iran.

The earliest medieval attestation of the toponym Kurdistan is found in a 12th century Armenian historical text by Matteos Urhayeci. He described a battle near Amid and Siverek in 1062 as to have taken place in Kurdistan.[31][32] The second record occurs in the prayer from the colophon of an Armenian manuscript of the Gospels, written in 1200.[33][34]

A later use of the term Kurdistan is found in Nuzhat-al-Qulub, written by Hamdollah Mostowfi in 1340.[35] 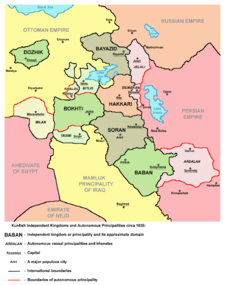 In the 16th century, after prolonged wars, Kurdish-inhabited areas were split between the Safavid and Ottoman empires. A major division of Kurdistan occurred in the aftermath of the Battle of Chaldiran in 1514, and was formalized in the 1639 Treaty of Zuhab.[36] Prior to World War I, most Kurds lived within the boundaries of the Ottoman Empire in the province of Kurdistan.[citation needed]. After the collapse of the Ottoman Empire, the Allies contrived to create several countries within its former boundaries – according to the never-ratified Treaty of Sèvres, Kurdistan, along with Armenia, were to be among them. However, the reconquest of these areas by the forces of Kemal Atatürk (and other pressing issues) caused the Allies to accept the renegotiated Treaty of Lausanne and the borders of the modern Republic of Turkey – leaving the Kurds without a self-ruled region. Other Kurdish areas were assigned to the new British and French mandated states of Iraq and Syria.

At the San Francisco Peace Conference of 1945, the Kurdish delegation proposed consideration of territory claimed by the Kurds, which encompassed an area extending from the Mediterranean shores near Adana to the shores of the Persian Gulf near Bushehr, and included the Lur inhabited areas of southern Zagros.[37][38]

At the end of the First Gulf War, the Allies established a safe haven in northern Iraq. Amid the withdrawal of Iraqi forces from three northern provinces, Iraqi Kurdistan emerged in 1992 as an autonomous entity inside Iraq with its own local government and parliament.

The Kurds are a people of Indo-European origin. They speak an Iranic language known as Kurdish, and comprise the majority of the population of the region – however, included therein are Arab, Armenian, Assyrian, Azeri, Jewish, Ossetian, Persian, and Turkic communities. Most inhabitants are Muslim, but adherents to other religions are present as well- including Yazidis, the Yarsan, Alevis, Christians,[39] and Jews.[40] 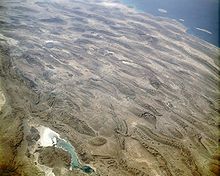 The Zagros Mountains from space, September 1992.

Historic map from 1721, showing borders of Curdistan provinces in Persia.

Iraqi Kurdistan is divided into six governorates, three of which (and parts of others) are under the control of the Kurdistan Regional Government. Iranian Kurdistan encompasses Kurdistan Province and the greater parts of West Azerbaijan, Kermanshah, and Īlām provinces. Syrian Kurdistan (Kurdish: Kurdistana Binxetê[43]) is located primarily in northeastern Syria, and covers the greater part of the province of Al Hasakah. The major cities in this region are Al-Qamishli (Kurdish: Qamişlû) and Al Hasakah (Kurdish: Hesaka).

Turkish Kurdistan encompasses a large area of south eastern Turkey and it is home to an estimated 15 to 20 million Kurds.[44]

In A Dictionary of Scripture Geography (published 1846), John Miles describes Upper and Lower Kurdistan as following:

Modern Curdistan is of much greater extent than the ancient Assyria, and is composed of two parts the Upper and Lower. In the former is the province of Ardelan, the ancient Arropachatis, now nominally a part of Irak Ajami, and belonging to the north west division called Al Jobal. It contains five others namely, Betlis, the ancient Carduchia, lying to the south and south west of the lake Van. East and south east of Betlis is the principality of Julamerick, south west of it is the principality of Amadia. the fourth is Jeezera ul Omar, a city on an island in the Tigris, and corresponding to the ancient Bezabde. the fifth and largest is Kara Djiolan, with a capital of the same name. The pashalics of Kirkook and Solimania also comprise part of Upper Curdistan. Lower Curdistan comprises all the level tract to the east of the Tigris, and the minor ranges immediately bounding the plains and reaching thence to the foot of the great range, which may justly be denominated the Alps of western Asia.[45]

The northern, northwestern and northeastern parts of Kurdistan are referred to as upper Kurdistan, and includes the areas from west of Amed to lake Urmia.

The lowlands of southern Kurdistan are called lower Kurdistan. The main cities in this area are Kirkuk and Arbil.

Much of the region is typified by an extreme continental climate – hot in the summer, bitterly cold in the winter. Despite this, much of the region is fertile and has historically exported grain and livestock. Precipitation varies between 200 and 400 mm a year in the plains, and between 700 and 3,000 mm a year on the high plateaux between mountain chains.[42]

Mountains are important geographical and symbolic features of Kurdish life, as evidenced by the saying "Kurds have no friends but the mountains".[46] Included in the region are Mount Judi and Ararat (both prominent in Kurdish folklore), Zagros, Shingar, Qendil, Shaho, Gabar, Hamrin, and Nisir. 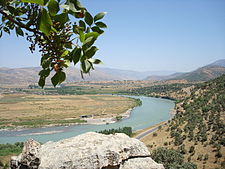 The plateaus and mountains of Kurdistan, which are characterized by heavy rain and snow fall, act as a water reservoir for the Near and Middle East, forming the source of the Tigris and Euphrates rivers, as well as other numerous smaller rivers, such as the Khabur, Tharthar, Ceyhan, Araxes, Kura, Sefidrud, Karkha, and Hezil. Among rivers of historical importance to Kurds are the Murat (Arasān) and Buhtān rivers in in Turkey; the Peshkhābur, the Little Zab, the Great Zab, and the Diyala in Iraq; and the Jaghatu (Zarrinarud), the Tātā'u (Siminarud), the Zohāb (Zahāb), and the Gāmāsiyāb in Iran.

These rivers, which flow from heights of three to four thousand meters above sea level, are significant both as water sources and for the production of energy. Iraq and Syria dammed many of these rivers and their tributaries, and Turkey has an extensive dam system under construction as part of the GAP (Southeast Anatolia Project); though incomplete, the GAP already supplies a significant proportion of Turkey's electrical energy needs. Due to the extraordinary archaeological richness of the region, almost any dam impacts historic sites.[47]

Kurdistan extends to Lake Urmia in Iran on the east and to semi-contiguous Kurdish-inhabited regions to the west on the Mediterranean. The region includes Lake Van, the largest body of water in Turkey; the only lake in the Middle East with a larger surface is Lake Urmia – though not nearly as deep as Lake Van, which has a much larger volume. Urmia, Van, as well as Zarivar Lake west of Marivan, and Lake Dukan near the city of Sulaymaniyah, are frequented by tourists.[47]

KRG-controlled parts of Iraqi Kurdistan are estimated to contain around 45 billion barrels (7.2×10^9 m3) of oil, making it the sixth largest reserve in the world. Extraction of these reserves began in 2007. Iraq's former Baath regime controls the resources of Kirkuk and Mosul, cities claimed by the KRG to be included in its territory.

Other mineral resources that exist in significant quantities in the region include coal, copper, gold, iron, limestone (which is used to produce cement), marble, and zinc. The world's largest deposit of rock sulfur is located just southwest of Arbil (Hewlêr).[49]

The incorporation into Turkey of the Kurdish-inhabited regions of eastern Anatolia was opposed by many Kurds, and has resulted in a long-running separatist conflict in which thousands of lives have been lost. The region saw several major Kurdish rebellions, including the Koçkiri Rebellion of 1920 under the Ottomans, then successive insurrection under the Turkish state – including the 1924 Sheikh Said Rebellion, the Republic of Ararat in 1927, and the 1937 Dersim Rebellion. All were forcefully put down by the authorities. The region was declared a closed military area from which foreigners were banned between 1925 and 1965.[50][51][52]

The city of Batman, eastern Turkey

In 1983, the Kurdish provinces were placed under martial law in response to the activities of the militant separatist and terrorist organization, Kurdistan Workers Party (PKK).[53][54] A guerrilla war took place through the 1980s and 1990s in which much of the countryside was evacuated, thousands of Kurdish-populated villages were destroyed, and numerous extrajudicial summary executions were carried out by both sides.[55] More than 37,000 people were killed in the violence and hundreds of thousands more were forced to leave their homes.[56] Volatility in the region eased following the capture of PKK leader Abdullah Öcalan in 1999, and, with the encouragement of European Union, the adoption of tolerance policies toward Kurdish cultural activities by the Turkish state. After 2004, political violence increased, and the Turkish-Iraqi border region remains tense.[57]

Further information: List of universities in Kurdistan and Kurdish literature