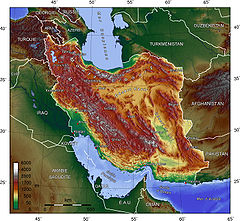 Topographic map of Iran with the Zagros Mountains 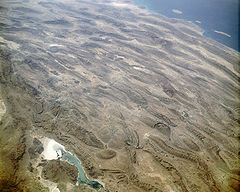 The Zagros Mountains from space, September 1992 [1]

The Zagros Mountains (Persian: رشته كوه زاگرس, Assyrian: ܛܘܪ ܙܪܓܣ, Kurdish: زنجیره‌چیاکانی زاگرۆس, Lurish: کو یه لی زاگروس, Arabic: جبال زغروس‎) are the largest mountain range in Iran and Iraq. With a total length of 1,500 km (932 mi), from northwestern Iran, and roughly correlating with Iran's western border, the Zagros range spans the whole length of the western and southwestern Iranian plateau and ends at the Strait of Hormuz. The highest points in the Zagros Mountains are Zard Kuh (4,548 m, 14,921 ft) and Mt. Dena (4,359 m, 14,301 ft). The Hazaran massif in the Kerman province of Iran forms an eastern outlier of the range, the Jebal Barez reaching into Sistan.

The Zagros fold and thrust belt was formed by collision of two tectonic plates — the Eurasian and Arabian Plates. Recent GPS measurements in Iran[2] have shown that this collision is still active and the resulting deformation is distributed non-uniformly in the country, mainly taken up in the major mountain belts like Alborz and Zagros. A relatively dense GPS network which covered the Zagros in the Iranian part [3] also proves a high rate of deformation within the Zagros. The GPS results show that the current rate of shortening in SE Zagros is ~10 mm/yr and ~5mm/yr in the NW Zagros. The NS strike-slip Kazerun fault divides the Zagros into two distinct zones of deformation. The GPS results also show different shortening directions along the belt, i.e. normal shortening in the South-East and oblique shortening in the NW Zagros.

The sedimentary cover in the SE Zagros is deforming above a layer of rock salt (acting as a ductile decollement with a low basal friction) whereas in the NW Zagros the salt layer is missing or is very thin. This different basal friction partly made different topographies in either sides of Kazerun fault. Higher topography and narrower zone of deformation in the NW Zagros is observed whereas in the SE, deformation was spread more and wider zone of deformation with lower topography was formed.[4] Stresses induced in the Earth's crust by the collision caused extensive folding of the preexisting layered sedimentary rocks. Subsequent erosion removed softer rocks, such as mudstone (rock formed by consolidated mud) and siltstone (a slightly coarser-grained mudstone) while leaving harder rocks, such as limestone (calcium-rich rock consisting of the remains of marine organisms) and dolomite (rocks similar to limestone containing calcium and magnesium). This differential erosion formed the linear ridges of the Zagros Mountains.

The depositional environment and tectonic history of the rocks were conducive to the formation and trapping of petroleum, and the Zagros region is an important part of Persian Gulf oil production.

Salt domes and salt glaciers are a common feature of the Zagros Mountains. Salt domes are an important target for oil exploration, as the impermeable salt frequently traps petroleum beneath other rock layers.

Type and age of rock

The mountains are divided into many parallel sub-ranges (up to 10, or 250 km wide), and have the same age as the Alps. Iran's main oilfields lie in the western central foothills of the Zagros mountain range. The southern ranges of the Fars Province have somewhat lower summits, reaching 4000 metres. They contain some limestone rocks showing abundant marine fossils.

The Kuhrud Mountains form one of the parallel ranges at a distance of approx. 300 km to the east. The area between these two impressive mountain chains is home to a dense human population that lives in the intermediate valleys which are quite high in altitude with a temperate climate. Their rivers, which eventually reach salt lakes, create fertile environments for agriculture and commerce.

The Zagros Mountains contain several ecosystems. Prominent among them are the forest and steppe forest areas (PA0446), which have a semi-arid temperate climate. The annual precipitation there ranges from 400 mm to 800 mm, and falls mostly in the winter and spring. The winters are severe, with winter low temperatures often below −25 degrees C. The summer and autumn are very dry.[5] They are the home to the Zagros Mountains Mouse-like Hamster (Calomyscus bailwardi).

Signs of early agriculture date back as far as 9000 BC to the foothills of the Zagros Mountains,[6] in cities later named Anshan and Susa. Jarmo is one archaeological site in this area. Shanidar, where the ancient skeletal remains of Neanderthals have been found, is another.

Some of the earliest evidence of production has been discovered in the Zagros Mountains; both the settlements of Hajji Firuz Tepe and Godin Tepe have given evidence of wine storage dating between 3500 and 5400 BC.[7]

During early ancient times, the Zagros was the home of peoples such as the Kassites, Guti, Assyrians, Elamites and Mitanni, who periodically invaded the Sumerian and/or Akkadian cities of Mesopotamia. The mountains create a geographic barrier between the flatlands of Mesopotamia, which is in Iraq, and the Iranian plateau. A small archive of clay tablets detailing the complex interactions of these groups in the early second millennium BC has been found at Tell Shemshara along the Little Zab.[8] Tell Bazmusian, near Shemshara, was occupied between the sixth millennium BCE and the ninth century CE, although not continuously.[9]