Arabic had been a minority language in Iraq since the 8th century BC,[18][20] it was spoken in Hatra in the 1st and 2nd centuries,[19] and by Iraqi Christians in Al-Hirah from the 3rd century,[21] and from the 8th century following the Muslim conquest of Mesopotamia it became the common language of Iraqi Muslims, due to Arabic being the language of the Qur'an and the Caliphate.[22][23] This change was facilitated by the fact that Arabic being a Semitic language, shared a close resemblance to Iraq's traditional languages of Akkadian and Aramaic. Some of Iraq's Christians and Mandaeans retained dialects of Aramaic, since it remained the liturgical language of their faiths. Kurdish-speaking Iraqis live in the mountainous Zagros region of northeast Iraq to the east of the upper Tigris. The Kurds and Arabs of Mesopotamia have interacted and intermarried for well over a millennium. Modern genetic studies indicate that Iraqi Arabs and Kurds are very closely related.[24][25] Arabic and Kurdish are Iraq's national languages.

Main articles: History of Iraq and Culture of Iraq

The Iraqi people have an ancient cultural history and civilization. In ancient and medieval times Mesopotamia was the political and cultural centre of many great empires. The ancient Iraqi civilization of Sumer is the oldest known civilization in the world, and thus Iraq is widely known as the cradle of civilization. Iraq remained an important centre of civilization for millennia, up until the Abbasid Caliphate (of which Baghdad was the capital), which was the most advanced empire of the medieval world (see Islamic Golden Age).

Further information on Iraq's civilization and cultural history can be found in the following chronology of Iraqi history:

The Iraqi people are a light skinned Caucasian people. It has been found that Y-DNA Haplogroup J2 originated in northern Iraq.[16] In spite of the importance of this region, genetic studies on the Iraqi people are limited and generally restricted to analysis of classical markers due to Iraq's modern political instability,[16] although there have been several published studies displaying the genealogical connection between all Iraqi people and the neighbouring countries, across religious and linguistic barriers. One such study reveals a close genetic relationship between Iraqis, Kurds, Caspian Iranians and Svani Georgians.[24]

For both mtDNA and Y-DNA variation, the large majority of the haplogroups observed in the Iraqi population (H, J, T, and U for the mtDNA, J2 and J1 for the Y-DNA) are those considered to have originated in Western Asia and to have later spread mainly in Western Eurasia.[16] The Eurasian haplogroups R1b and R1a represent the second most frequent component of the Iraqi Y-chromosome gene pool, the latter suggests that the population movements from Central Asia/Eastern Europe into modern Iran also influenced Iraq.[16]

Many historians and anthropologists provide strong circumstantial evidence to posit that Iraq's Maʻdān people share very strong links to the ancient Sumerians - the most ancient inhabitants of southern Iraq, and that Iraq's Mandaeans share the strongest links to the Babylonians.[35] The Beni Delphi (sons of Delphi) tribe of Iraq is believed to have Greek origins, from the Macedonian soldiers of Alexander the Great and the colonists of the Seleucid Empire.

The Assyrian Christian population are closely related to other Iraqis,[25] and also to Jordanians, yet due to religious endogamy have a distinct genetic profile that distinguishes their population.[36] "The Assyrians are a fairly homogeneous group of people, believed to originate from the land of old Assyria in northern Iraq", and "they are Christians and are bona fide descendants of their namesakes."[37]

Studies have reported that most Irish and Britons are descendants of farmers who left modern day Iraq and Syria 10,000 years ago.[38] Genetic researchers say they have found compelling evidence that four out of five (80% of) white Europeans can trace their roots to the Near East.[38] In another study, scientists analysed DNA from the 8,000 year-old remains of early farmers found at an ancient graveyard in Germany. They compared the genetic signatures to those of modern populations and found similarities with the DNA of people living in today's Turkey and Iraq.[39]

Iraqis have historically been a multilingual people, conversant in several languages but having a Semitic lingua franca. Iraqi identity transcends language boundaries and is more associated with geography; the Tigris–Euphrates alluvial plain and its environs.

What defines somebody as being Iraqi are factors including speaking Mesopotamian Arabic, Aramaic or Kurdish, being of Iraqi ancestry, identifying with Iraqi culture and Iraqi history; both ancient and contemporary, and having Iraqi nationality. Many Iraqis of Christian and Kurdish backgrounds wholeheartedly identify as Iraqi and feel themselves part of the Iraqi people, with shared Mesopotamian origins and cultural bonds.

The single identity and heritage of the Iraqi people is most commonly seen in the Iraqi cuisine. Iraqi cuisine has changed and evolved since the time of the Sumerians, Akkadians, Babylonians, Assyrians and Abbasids; however several traditional Iraqi dishes have already been traced back to antiquity [40] such as Iraq's national dish Masgouf and Iraq's national cookie Kleicha, which can be traced back to Sumerian times.[41]

Nowadays, the demonym "Iraqi" includes all minorities in the country, such as the Kurds and Turkmen (although these groups often specify their ethnicity by adding a suffix such as "Iraqi Kurdish" or "Iraqi Turkmen"). It is common for Iraqi Arabs to have relatives of Iraqi Kurdish background, and vice versa.

Iraq's national languages are Arabic and Kurdish. Arabic is spoken as a first language by around 79 percent of Iraqi people, and Kurdish by around 17 percent. The two main regional dialects of Arabic spoken by the Iraqi people are Mesopotamian Arabic (spoken by approximately 18.1 million Iraqis) and North Mesopotamian Arabic (spoken by approximately 7.8 million Iraqis in Iraq's north around the city of Mosul).[42] The two main dialects of Kurdish spoken by Kurdish Iraqis are Soranî (spoken in the cities of Arbil and Sulaymaniyah)[43] and Kurmanji (spoken in Duhok).[43] In addition to Arabic, most Christian Iraqis (Assyrians/Chaldeans) and some Mandaean Iraqis speak Neo-Aramaic dialects, and around 1 percent of Iraqi people speak Persian and Turkmen respectively. 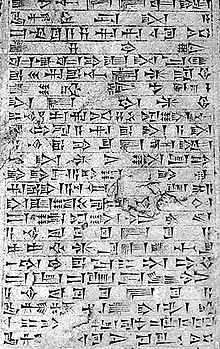 A 6th century BC Babylonian Akkadian inscription. The Akkadian language was in written use in Iraq until the 1st century AD

At the time of the Islamic conquest in the 7th century, the majority of Iraqis spoke Aramaic,[32] having adopted this language in the early to mid 1st millennium BC during the Assyrian and Babylonian empires. Prior to this adoption of Aramaic, Iraqis had spoken Akkadian since the late 3rd millennium BC, and Sumerian for millennia prior to that. The Sumerian and Akkadian languages remained in written use in Iraq until the late 1st century AD.[44][45]

Akkadian and Aramaic are both Semitic languages closely related to the Arabic language,[46] while Sumerian is a language isolate.

Small numbers of Arabic-speakers had been settling in Iraq since the early 1st millennium BC,[32] however they usually became Aramaicized after a few generations in the country.[32] Though there were a few Arabic-speaking cities during the Parthian and Sassanian eras, such as Hatra and Al-Hirah respectively.[19][21]

Shortly following the Rashidun Islamic conquest, the Umayyad Caliphate was established in 661 AD. At the end of the 7th century, the fifth Umayyad Caliph Abd al-Malik ibn Marwan (r. 685–705) established Arabic as the official language of the state.[47] Over the next couple of centuries, most people in the empire including most Iraqis, became Arabicized. By the end of the 8th or 9th century, Arabic had largely replaced Aramaic in Iraq. An Aramaic vernacular was retained only by small minorities who didn't convert to the popular Islamic faith. There were also small numbers of Arabians who settled in Iraq during this time, and many Iraqis became affiliated with Arab tribes, as was customary.

The point at which Aramaicization (whereby Arabs settling in Iraq became Aramaicized) gave way to Arabicization seems to have been around the mid eighth century,[32] around the time of the establishment of the Abbasid Caliphate in Baghdad, and shortly after Umayyad Caliph Abd al-Malik ibn Marwan had made Arabic the official language of the state.

In addition, since the Achaemenid era in the mid 1st millennium BC, through the Sassanian era in the mid 1st millennium AD, and to the present time, there has been a small Persian minority and a bilingual Persian-speaking minority in Iraq.[48] During the Sassanian era (224–638), Iraq was the core of the empire,[48] and many urban Iraqis were conversant in Persian as a second language.[48]

Linguistic chronology of the Iraqi people:

Iraq has many devout followers of its religions. In 1968 the Iraqi constitution established Islam as the official religion of the state as the majority of Iraqis (97%) are Muslim (both Shīʻah and Sunni).

In addition to Islam, many Iraqi people are Christians belonging to various Christian denominations, some of which are the Chaldean Catholic Church (Chaldean Christians), the Syriac Orthodox Church, and the Assyrian Church of the East. Their numbers inside Iraq have dwindled considerably and range between 500,000 and 800,000; around 2% of the population.

Other religious groups include Mandaeans, Shabaks, Yazidis and followers of other minority religions. Furthermore, Jews had also been present in Iraq in significant numbers historically, but their population dwindled, after virtually all of them fled to Israel between 1949 to 1952.[49][50]

The Iraqi diaspora is not a sudden exodus but one that has grown exponentially through the 20th century as each generation faced some form of radical transition or political conflict. From 1950 to 1952 Iraq saw a great exodus of roughly 120,000 - 130,000 of its Jewish population under the Israel-led "Operation Ezra and Nehemiah". There were at least two large waves of expatriation of both Christians and Muslims alike. A great number of Iraqis left the country during the regime of Saddam Hussein and large numbers have left during the Second Gulf War and its aftermath. The United Nations estimates that roughly 40% of Iraq's remaining and formerly strong middle-class have fled the country following the U.S.-led invasion in 2003.

As a consequence of eight years of U.S.-led military occupation and massive terrorism introduced by the occupation, Iraqis currently form the second largest refugee group in the world numbering over 1.8 million.[51] The UNHCR estimates that over 4.7 million Iraqis have been displaced during the U.S.-led occupation of Iraq.[52]