The Imām ‘Alī Holy Shrine (Arabic: حرم الإمام علي‎), also known as Masjid Ali or the Mosque of ‘Alī, located in Najaf, Iraq, is the third holiest site for some of the estimated 200 million followers of the Shia branch of Islam. ‘Alī ibn Abī Tālib, the cousin of Muhammad, the fourth caliph (Sunni belief), the first Imam (Shia belief) is buried here. According to Shi'a belief[1] buried next to Ali within this mosque are the remains of Adam and Noah.

The shrine was first built by the Iranian ruler the Daylamite Fannakhosraw Azod ad Dowleh in 977 over the tomb of Ali. After being destroyed by fire, it was rebuilt by the Seljuk Malik Shah I in 1086, and rebuilt yet again by the Safavid Shah Ismail I shortly after 1500.

During the uprising of March 1991, following the Persian Gulf War, Saddam Hussein's Republican Guards damaged the shrine, where members of the Shia opposition were cornered, in storming the shrine and massacring virtually all its occupants. Afterwards the shrine was closed for two years, officially for repairs. Hussein also deported to Iran a large number of the residents of the area who were of Iranian descent. It is newly renovated by Dawoodi Bohras spiritual leader the 52nd dai mutlaq Dr. Syedna Mohammad Burhanuddin.(TUS) 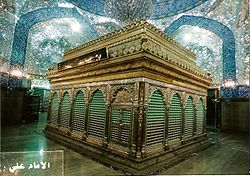 Inside Imām ‘Alī Mosque (before the renovations in 2008) 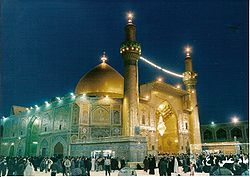 Imām ‘Alī Mosque (before the renovations in 2008)

As the burial site of Islam's second most important figure,[2] the Imām ‘Alī Mosque is considered by all Shias as the third holiest Islamic site[3][4][5][6][7][8] The Boston Globe reports “for the world's nearly 120 million Muslim Shias, Najaf is the third holiest city, behind Mecca and Medina in Saudi Arabia.[9][10][11] for some of the estimated 200 million followers of the Shī‘ah branch of Islām worldwide – approximately 15 percent of total Muslims. It is estimated that only Karbalā, Makkah and Madīnah receive more Muslim pilgrims.[12] A famous hadith mentions the site as one of "five definitive holy places that we respect very much".[13]

Also buried within this mosque according to Shias are Prophet Adam[1][14] and Prophet Noah.[1][14]

The site is visited annually by at least 8 million pilgrims on average, which is estimated to increase to 20 million in years to come.[15]Many Shī‘ah believe that ‘Alī did not want his grave to be desecrated by his enemies and consequently asked his friends and family to bury him secretly. This secret gravesite is supposed to have been revealed later during the Abbasid caliphate by Ja‘far as-Sādiq, the Sixth Shī‘ah Imām.[16] Most Shī‘as accept that ‘Alī is buried in Imām ‘Alī Mosque, in what is now the city of Najaf (which grew around the shrine).[17]

It has also been narrated from Ja‘far as-Sādiq, the 6th Imām, that Imām ‘Alī Mosque is the third of five holy places: Makkah, Madīnah, Imām ‘Alī Mosque in Najaf, Imam Husayn Shrine in Karbalā, and the Shrine for Fātimah - daughter of Mūsā al-Kādhim in Qom.[18]

Since the invasion of Iraq by the U.S. military in 2003, there have been a number of further attacks at the mosque: