The Mesopotamian Marshes are a wetland area located in southern Iraq and partially in southwestern Iran. Historically the marshlands, mainly composed of the separate but adjacent Central, Hawizeh and Hammar Marshes, used to be the largest wetland ecosystem of Western Eurasia. It is a rare aquatic landscape in the desert, providing habitat for the Marsh Arabs and important populations of wildlife. Draining of portions of the marshes began in the 1950s and continued through the 1970s to reclaim land for agriculture and oil exploration. However, in the late 1980s and 1990s, during the presidency of Saddam Hussein, this work was expanded and accelerated to evict Shia Muslims from the marshes. Before 2003, the marshes were drained to 10% of their original size.[1] After the fall of Saddam's regime in 2003, the marshes have partially recovered but drought along with upstream dam construction and operation in Turkey, Syria and Iran have hindered the process.[2]

In the 4th millennium BC the first literate societies emerged in Southern Mesopotamia, often referred to as the Cradle of Civilization, and the first cities and complex state bureaucracies were developed there during the Uruk period. Due to the geographical location and the ecological factors of the Fertile Crescent, a crescent-shape fertile area running from the basins of the Nile in Egypt, northwards along the Mediterranean coast in Palestine and Israel, and southwards again along the Euphrates and the Tigris towards the Persian Gulf, civilizations were able to develop agricultural and technological programmes. The crucial trigger was the availability of wild edible plant species. Farming arose early in the Fertile Crescent because the area had a great quantity of wild wheat and pulse species that were nutritious and easy to domesticate.[3]

The Marsh Arabs are the primary inhabitants of the Mesopotamian Marshes and are the descendants of ancient Sumerians, as their civilization dates back 5000 years. They live in secluded villages of elaborate reed houses throughout the marshes, often only reached by boat. Fish, rice cultivation, water buffalo and other resources are also used in their daily lives. In the 1950s, there were an estimated 500,000 Marsh Arabs. This population shrank to about 20,000 following the draining and Saddam's violent reprisals, and between 80,000 and 120,000 fled to neighboring Iran.[4] Following the 2003 Iraq invasion, Marsh Arabs have begun to return to the marshes.[5] 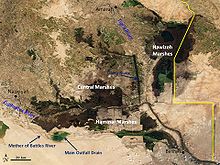 As their name suggests, the Mesopotamian Marshes are located in the larger region which used to be called Mesopotamia. Mesopotamia, meaning "in between rivers", is now occupied by modern Iraq, eastern Syria, south-eastern Turkey, and southwest Iran. The marshes lie mostly within southern Iraq and a portion of southwestern Iran. Originally covering an area of20,000 km2 (7,700 sq mi) and divided into three major areas, the Central Marshes lie between the Tigris and Euphrates, while the Hammar Marshes lie south of the Euphrates and the Hawizeh Marshes are bound east of the Tigris. Before the 2003 Invasion of Iraq, about 90% of the marshes had been drained. The marshes lie on a flat alluvial plain, as the Euphrates decreases only 12 m (39 ft) in elevation during its last 300 km (190 mi) while the Tigris falls 24 m (79 ft). This delta provides an environment that allows the Tigris and Euphrates to often meander along, forming distributaries. The Euphrates has often terminated near Nasiriyah into the Hammar Marshes as its flow slows. The Tigris can distribute some of its flow into the Central and Hawizeh marshes as it slows near Amarah. Downstream of Amarah though, several of its tributaries originating in Iran allow the Tigris' flow to increase and maintain a steady course thereafter. The three marshes combined once provided an intertwined environment, particularly during periods of flooding as the rivers overflowed.[6]

The Central Marshes receive water from influxes of the Tigris's distributaries, namely the Shatt al-Muminah and Majar-al-Kabir south of Amarah. The Tigris serves as the marshes' eastern boundary while the Euphrates serves as its southern boundary. Covering an area of 3,000 km2 (1,200 sq mi), the marshes consist of reed beds and several permanent lakes including Umm al Binni lake. The Al-Zikri and Hawr Umm Al-Binni lakes are two of the notable lakes and are 3 m (9.8 ft) deep.[6]

The Hammar Marshes is primarily fed by the Euphrates and lies south of it with a western extent to Nasiriyah, eastern border of the Shatt al-Arab and southern extent of Basrah. Normally, the marshes are a 2,800 km2 (1,100 sq mi) area of permanent marsh and lake but during period of flooding can extend to 4,500 km2 (1,700 sq mi). In periods of flooding, water from the Central Marsh, fed by the Tigris can overflow and supply the marshes with water. Hammar Lake is the largest water body within the marsh and is 120 km (75 mi) long and 250 km (160 mi) with depths ranging between1.8 m (5.9 ft)-3 m (9.8 ft). In the summer, large portion of the marshes' and lake's shore are exposed and islands are exposed which are used for agriculture.[6]

The Hawizeh Marshes lie east of the Tigris and a portion lie in Iran. The Iranian side of the marshes, known as Hawr Al-Azim, is fed by the Karkheh River, while the Tigris distributaries al-Musharah and Al-Zahla supply the Iraqi side, only with much less water than the Karkheh. During spring flooding, the Tigris may directly flow into the marshes. The marshes are 80 km (50 mi) from north to south and about 30 km (19 mi) from east to west, covering a total area of 3,000 km2 (1,200 sq mi). Permanent portions of the marshes include the northern and central portion while the southern part is generally seasonal. Moderately dense vegetation can be found in the permanent areas along with large 6 m (20 ft)-deep lakes in the northern portions.[6] As the Hawizeh Marshes fared the best during the draining, they can facilitate the reproduction of flora, fauna and other species in Central and Hammar marshes.[7] 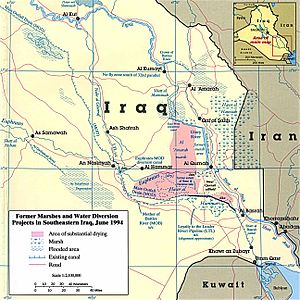 1994 Map of The Mesopotamian Marshes with draining features. Click to expand.

The draining of Mesopotamian Marshes began in the 1950s with the Central Marshes and gradually accelerated as it affected the two other main marshes until early in the 21st century with the 2003 invasion of Iraq. The draining of the marshes was intended at first to reclaim land for agriculture along with oil exploration but later served as a punishment for Shia Arabs in response to the 1991 uprisings in Iraq. The draining of the marshes was largely due to dams, dykes and other diversion structures constructed into Iraq but were exacerbated by upstream dam construction in Syria and Turkey.[8]

While the British engineers worked with the Iraqi government, Frank Haigh developed the Haigh Report in 1951. His report recommended a complex of canals, sluices and dykes on the lower portions of both the Tigris and Euphrates. These water control structures could be used to drain marshes therefore creating profitable farmland. In 1953, construction began on the Third River or Main Outfall Drain and later the Saddam River which would drain water from the Central Marsh under the Euphrates and through a canal eventually into the Persian Gulf.[8] Work on the Third River and other draining projects, particularly for the Hawizeh Marsh, quickly progressed in the 1980s during the Iran-Iraq War in order to afford Iraqis a tactical advantage in the marshes.[6] Part of the Hammar Marshes was also drained in 1985 to clear area for oil exploration.[9]

After the 1991 Gulf War, Shia Muslims in southern Iraq rebelled against Saddam Hussein who in turned crushed the rebellion and further accelerated the draining of the Central and Hammar marshes in order to evict Shias that have taken refuge in the marshes.[6] With the exception of the Nasiriyah Drainage Pump Station, the 565 km (351 mi) Third River was completed in 1992 and two other canals were constructed south and nearly parallel to it. One, the Mother of Battles canal, was constructed to divert the flow of the Euphrates south below the Hammar Marsh. Second, the 240 km Loyalty to Leader Canal also known as the Basrah Sweetwater Canal, which originates in the lower Euphrates region, collected water from the terminus of the Gharraf River and diverted it under the Euphrates, away from the Central Marshes and below the Hammar Marshes towards Basrah.[6][10] The Glory River was also constructed to divert water from the Tigris's southern-flowing distributaries east and parallel along the Tigris until they reached the Euphrates near its confluence with the Tigris at Qurna.[6]

By the 2003 invasion of Iraq, the marshes had lost 90% of their size from the previous decades.[5] The Central and Hammar Marshes were nearly drained and only 35% of the Hawizeh Marshes remained.[1] After the invasion, locals destroyed dikes. The combined efforts of the Iraq government, United Nations, U.S. agencies and record precipitation in Turkey helped begin a restoration of the marshes.[11] As of late 2006, 58% of the original marshes had been reinundated.[12] The Nasiriyah Drainage Pump Station was completed in 2009, affording the Third River to be used for agricultural drainage.[13] However, recent drought and continued upstream dam construction and operation in Turkey, Syria and Iran have reduced the marshes to around 30% of their original size by 2009.[2]

The marshes are home to 40 species of bird and several species of fish plus demarcating a range limit for a number of avifauna species. The marshes were once home to millions of birds and the stopover for millions of other migratory birds, including flamingos, pelicans and herons as they traveled from Siberia to Africa. At risk are 40% to 60% of the world's marbled teal population that live in the marshes, along with 90% of the world's population of Basra Reed-warbler.[14] Also at risk are the Sacred Ibis and African darter.[15] A subspecies of the Hooded crow known as the Mesopotamian crow is found in this part of southern Iraq.[16] Seven species are now extinct from the marshes, including the Indian Crested Porcupine, the bandicoot rat and the marsh gray wolf.[8] The draining of the marshes caused a significant decline in bioproductivity; following the Multi-National Force overthrow of the Saddam Hussein regime, water flow to the marshes was restored and the ecosystem has begun to recover.[17]