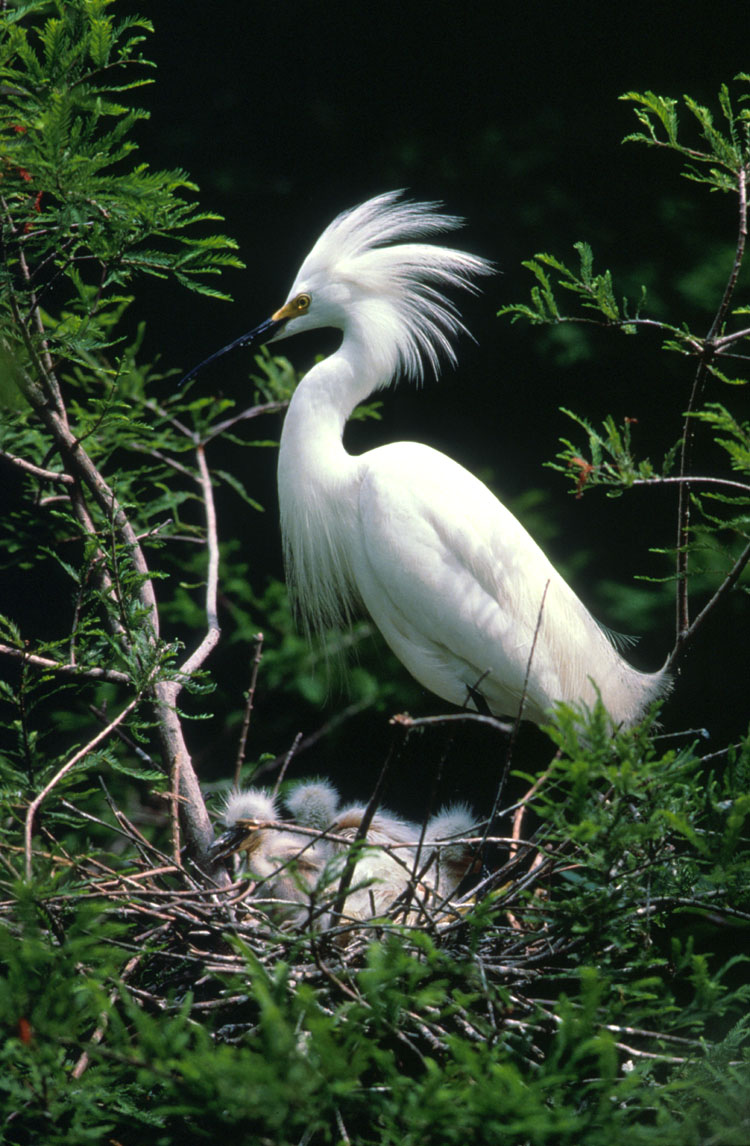 The herons are wading s in the Ardeidae family. Some are called s or s instead of herons. Within the family, all members of the genera "Botaurus" and "Ixobrychus" are referred to as bitterns, and - including the or Zigzag Bittern - are a group within the Ardeidae. However, egrets are not a biologically distinct group from the herons, and tend to be named differently because they are mainly white and/or have decorative plumes, and while having the same build as the larger herons tend to be smaller.

The classification of the individual heron/egret species is fraught with difficulty, and there is still no clear consensus about the correct placement of many species into either of the two major genera, "Ardea" and "". Similarly, the relationship of the genera in the family is not completely resolved. However, one species formerly considered to constitute a separate family Cochlearidae, the , is now regarded as a member of the Ardeidae.

Although herons resemble birds in some other families, such as the s, es and s, they differ from these in flying with their necks retracted, not outstretched. They are also one of the bird groups that have .

The members of this family are mostly associated with , and prey on rabbits, fish, frogs and other aquatic species. Some, like the and , also take large insects, and are less tied to watery environments.

In February , the Canadian scientist Dr. announced a method of measuring avian in terms of their innovation in feeding habits. Herons were named among the most intelligent birds based on this scale, reflecting a wide variety, flexibility and adaptiveness to acquire food. [ [http://www.mcgill.ca/reporter/35/05/lefebvre/ McGill Reporter] ]

Some members of this group nest colonially in trees, others, notably the bitterns, use reedbeds.

Herons are also known as "shitepokes", or euphemistically as "shikepokes". suggests that herons were given this name because of their habit of defecating when flushed. The terms "shitepoke" or "shikepoke" can be used as insults in a number of situations. ["Shitepoke" and "Shikepoke" entries", , , Editor in Chief, , 1971 ISBN 0877790019] For example, the term "shikepoke" appears in the 1931 play "Green Grow The Lilacs", and in the 1943 "".

The 1971 describes the use of "shitepoke" for the small green heron of North America ("Butorides virescens") as originating in the , citing a published example from 1853. The OED also observes that "shiterow" or "shederow" are terms used for herons, and also applied as derogatory terms meaning a "thin weakly person". This name for a heron is found in a list of gamebirds in a royal decree of (1566 -1625) of . The OED speculates that "shiterow" is a corruption of "shiteheron". ["Shitepoke" and "Shiterow" entries", , , 1971, 76-188038]

Analyses of the skeleton, mainly the , suggested that the Ardeidae could be split into a diurnal and a / group which included the bitterns. From studies and skeletal analyses focusing more on bones of body and limbs, this grouping has been revealed as incorrect [McCracken & Sheldon (1998)] . Rather, the similarities in skull morphology reflect to cope with the different challenges of daytime and nighttime feeding. Today, it is believed that three major groups can be distinguished [Sheldon "et al." (1995, 2000)] , which are (from the most primitive to the most advanced):
* tiger herons and the boatbill
* bitterns
* day-herons and egrets, and night-herons

The night herons could warrant separation as subfamily Nycticoracinae, as it was traditionally done. However, the position of some genera (e.g. "Butorides" or "Syrigma") is unclear at the moment, and molecular studies have until now suffered from a small number of studied taxa. Especially the relationship among the ardeine subfamily is very badly resolved. The arrangement presented here should be considered provisional.

Other prehistoric and fossil species are included in the respective genus accounts.